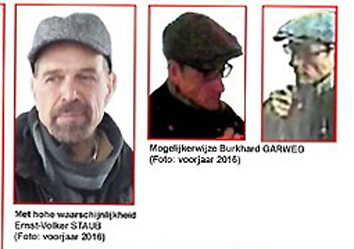 Dutch police detectives are on the lookout (BOLO) for three aging German far-left militants who have disappeared decades ago but who have emerged as the main suspects in a series of recent heists.

Ernst-Volker Staub, 61, Burkhard Garweg, 47, and Daniela Klette, 57, are former members of the violent Red Army Faction (RAF) — also known as the Baader-Meinhof gang — a German militant group, which terrorized Germany (then: West Germany) in the 1970s and 1980s with a campaign of bombings, arson, kidnappings and killings.

DutchNews reports that the Dutch and German police suspect the three aging militants are behind a series of attacks on armed money-transporting vehicles and at least six supermarket robberies.

“Police have reason to believe that the three are living in the Netherlands,” Dutch police said in a statement. “Crimes were committed on the Dutch-German border, they have not yet been detained in Germany and a mobile phone belonging to one of the fugitives was switched off in the Netherland.”

In four of the six supermarket holdups, between €46,000 and €100,000 were stolen. In the holdups May 7 and June 6, the perpetrators just took the security guards’ firearms, but no cash. June 7, while two robbers disarmed two security guards stationed outside the supermarket and escaped with their firearms, two other robbers attacked a money-transporting van with AK-47 assault rifles. The attackers, after firing a few rounds at the armored van, fled without taking any cash, police said.

DutchNews notes that Dutch police believe the three militants may be living on a small secluded farm or anonymously in a city, “constantly changing from home to home and pretending to be tourists … . The fugitives are armed and dangerous and should by no means be approached when spotted,” the police said.

The three militants are among a larger group of fugitives who have been on the run for three decades for membership of the Marxist RAF. As was the case with the Brigate Rosse (Red Brigade) in Italy and the Japanese Red Army, the RAF emerged as a militant, radicalized fringe of the 1960s student protest movement.

Staub, Garweg and Klette, were members of what was called the RAF’s “third generation,” who continued to operate in Germany in the 1980s and early 1990s. Their last terrorist act in Germany is believed to have been the 1993 explosives attack on the construction site of a new prison in Hesse state in central Germany. Members of the group entered the construction site at night, abducted a security guard, then placed explosives throughout the site, causing about €600,000 of property damage.