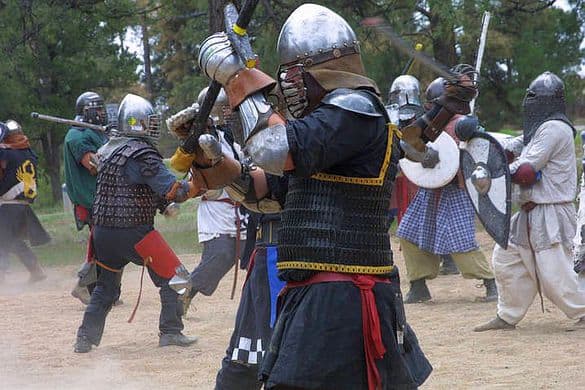 On April 28, 2012, the banner of the Shire of Bryngolau (Shining Hill in Welsh) was raised for the first time when local members of the Society for Creative Anachronism (SCA) gathered for a day of fighting, feasting, music and dance in the style of the Middle Ages.

It was the Shire’s first official event.

SCA is a non-profit educational organization devoted to the study of the Middle Ages and Renaissance. It isn’t just about research — far from it.

Members of SCA live the part at their events. Members dress in period styles and participate in the cultural and martial arts of the Middle Ages and Renaissance.

The focus is on Western Europe in the period between 600 and 1600, but people are welcome to portray members of other cultures that someone in Western Europe might have come into contact with.

The world-wide organization has around 40,000 members. 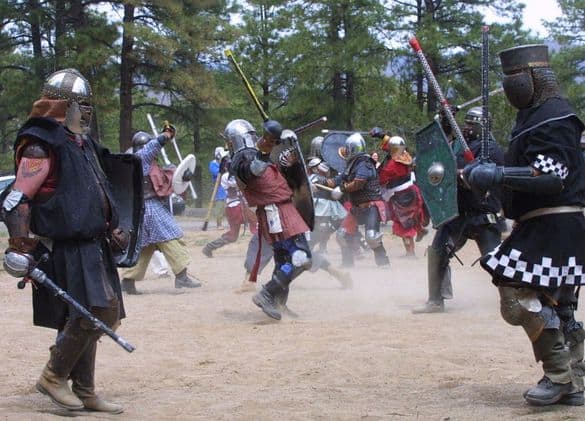 Bouts on the tourney grounds. Photo by Bonnie J. Gordon/ladailypost.com

Although local members of SCA have been meeting informally for some time, the Shire of Bryngolau is a brand new group.

They are currently an “Incipient Shire” while they demonstrate their ability to function as a full SCA branch.

The Shire of Bryngolau encompasses Los Alamos and Rio Arriba counties. The group has 23 paid members — ages range from teens to seniors.

Members of the Society choose unique period names. Llywus Ap Alan (Bryan Bennett in the mundane world) is the Seneschal or Chapter President of the Shire of Bryngolau.  He’s been involved with SCA since 1984. Calligraphy and illumination are two of his passions.

“I carve my own pens and make my own ink from iron and oak galls. I stick as close as I can to period recipes,” Bennett said. “We have to interpolate a lot of technique because it wasn’t written down. These days, the Internet is a great resource.” 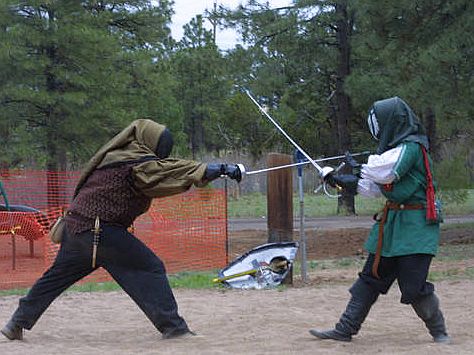 Members learn from each other in classes and one-on-one training. Whether it’s period music, cuisine, dance, armoring, brewing or any of the hundreds of skills mastered by SCA members, passing on their passions is one of the great pleasures of SCA membership, Bennett said.

The flashiest aspect of SCA is heavy combat in period armor. Like many young men, Baron Christopher Blackwood (Christopher Graham) was drawn in by the swordplay.

“Fighting drew me in almost 30 years ago, but the honor and chivalry are why I stayed. It carries through to my other life,” he said. “I think a lot of the appeal is the romance. Ladies are treated like ladies. The knight in shining armor is very appealing. You can be a hero for a weekend.”

Graham is an armorer. He creates custom armor for others as well as for his own use. At the April 28 event held at North Mesa Park, he was debuting a brand new suit of armor.

“The 700 plates I used are plastic, but I used a technique of plating from the Middle Ages,” Graham said. “I do a lot of research to get as close to the period as possible.” 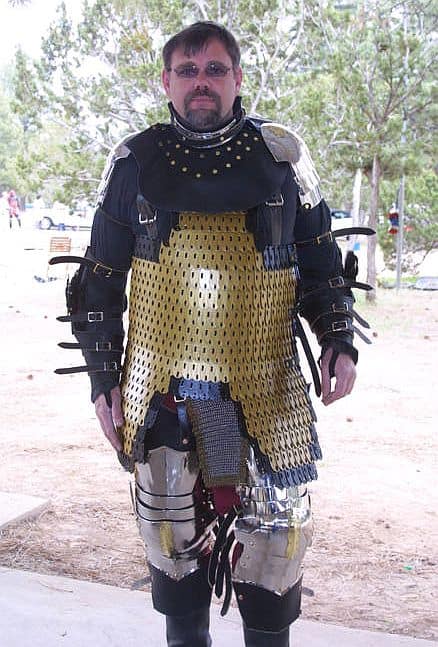 Graham is mostly self-taught as an armorer and makes a lot of his own tools. He strives to make the armor authentic and beautiful, but it must also be functional in a fight. Graham was testing out his new armor on the field at the recent event.

Combat during bouts and battles is organized by strict rules to prevent injuries. Swords are made from rattan, not steel.

It is forbidden to strike an opponent from an inch above the knee down. Armor must conform to certain requirements so people are protected. Blows are considered to inflict the damage such a blow would inflict in actual combat.

“Blows are judged on an honor system,” Graham said. “Only the person who is hit can judge the blow. It works well. People are very honorable.”

In addition to heavy combat, some SCA members also duel with rapiers and practice archery. 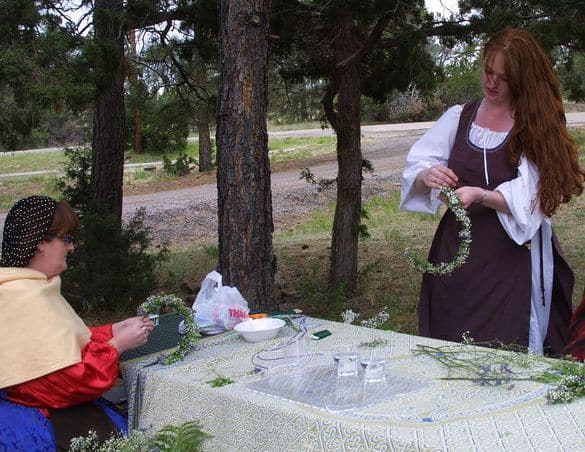 Bethany Stephens is new to SCA. She attended her first event last fall.

“I was hooked,” she said. “It has such a wide spectrum of things to do.”

Stephens recently returned from a SCA War in Phoenix where there were 1,000 combatants.Wars involve archery and catapults as well as one to one combat.

She took drumming lessons at that event and developed a new interest. She is also studying armor making with Graham and calligraphy with Bennett.

“I want to get into cooking,” Stephens said. “I already do mead making and home brewing. There’s so much to learn.”

It’s Knight who attracts everyone’s attention when an announcement is to be made. He also announces the bouts during combat.

Heralds also assist members of the Shire in developing their unique SCA name. 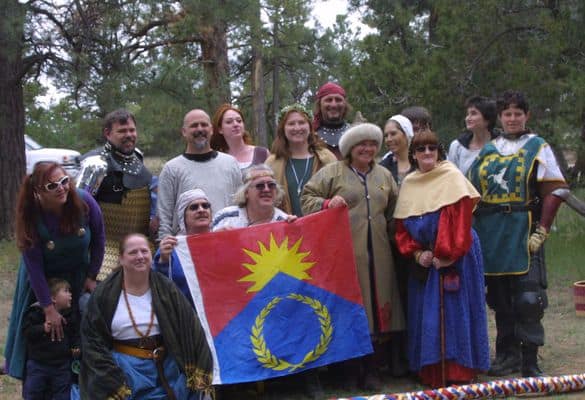 Names must be period accurate, but also fit the person involved. Knight helps members develop a coat of arms. Each coat of arms is unique to a specific person.

Knight helps people create a coat of arms that obeys the rules of heraldry and follows the conventions of SCA, but also expresses their personality and nature.

A rousing maypole dance to the music of a flute rounded out the April 28 celebration. Brightly colored costumes intermingled as the ribbons wound tighter and tighter around the maypole.

Laughter filled the air as dancers wove in and out. 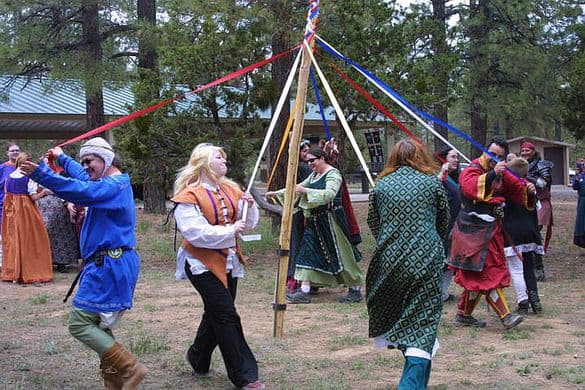 The Middle Ages appeal to many people for many reasons. Producing a beautiful handcrafted item, fighting with a sword, wearing beautiful clothing, and learning about a period long gone draw people to SCA.

“It gives us the opportunity to drop technology and live in a way that’s very different from what you’d otherwise get to experience,” Graham said. “A world lit by campfire is very appealing to people.”