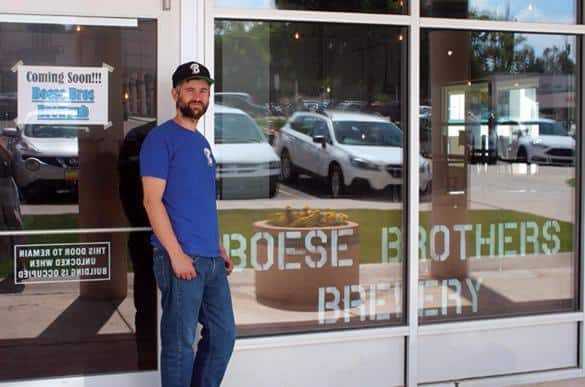 Update: Boese Brothers Brewery reported this morning that due to unexpected delays, the brewery is now anticipating an August opening rather than July.

Who hasn’t sat around with a friend or family member and a couple of beers, talking about opening your own brewery, club or bar?

Well the Boese brothers didn’t just talk. Flash forward about 10 years and Boese Brothers Brewery is coming to Los Alamos. The Boese brothers, Sam and George, also have a Northeast Heights taproom in addition to their downtown brewery in Albuquerque, which they founded in 2014. They partner with New Mexico Hard Cider in Desert Dogs, a Santa Fe pub near the plaza.

Boese is pronounced with a long o as in bow and a long e on the end as in zebra.

“Occasionally, someone gets it right on the first try,” Sam said.

Once you get the name down, Boese Brothers Brewery is pretty catchy.

The new bar at 145 Central Park Square is undergoing renovations in the space formerly occupied by UnQuarked Wine Bar. A new marble bar has been installed and new tables, sporting the letter B had just been delivered Tuesday when the Los Alamos Daily Post spoke with Sam at the brewery.

“We’re hoping for an early July opening,” Boese said. “We’re waiting on approval from the state, so I can’t say exactly when. The renovations are really coming along.”

“We’ll feature all of our beers on tap,” he said. “We brew between eight and 12 beers at a time, including seasonal beers. For summer, we’re brewing a watermelon sour beer and we have a grapefruit IPA coming.”

“We have a great sandwich menu,” Boese said. “We serve hot and cold sandwiches as well as paninis. We’ll have favorites like Ruebens and lots of really great vegetarian choices. We make our own sauces and I promise you, these are great sandwiches.”
The plan is to open in the early afternoon and close around 11 p.m., but Boese is leaving the door open to serving lunch and staying open later. The venue also will offer live music.

“We’re hoping people will go barhopping and take in the various places in town,” he said.

Imagine that, barhopping in Los Alamos.

Boese is a graduate of the American Brewers Guild School and worked in several breweries before the brothers started their business, including one in China!

He’s also a brand new resident of Los Alamos. Sam and his wife moved to town two months ago. He’s really enjoying his new hometown so far, he said.

Email the brothers at boesebrosbrewpub@gmail.com to set up an interview. To get a peak at the beer menu and learn more about Boese Brothers Brewery, visit boesebrothersbrewery.com.