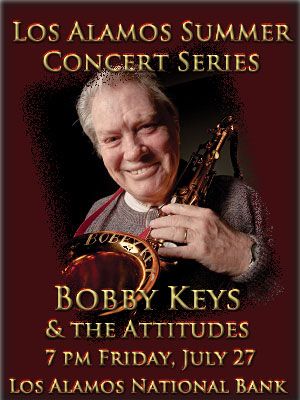 Keith Richards says in his autobiography, “Life” that Bobby Keys is “My closest pal. A soul of rock ‘n roll, a solid man, and also a depraved maniac.” I hope that interests you because Bobby is playing the Los Alamos County Summer Concert Series with his New Mexico band, the Attitudes this Friday, July 27 at Los Alamos National Bank. The show is free and starts at 7PM.

Bobby is best known as the “6th” man of the Rolling Stones. He says “I’m not a member of the Stones but a well-paid assistant.” He is the sax player with the best known solos in the world. He played on “Honky Tonk Women”, “Sticky Fingers”, “Rip This Joint”, “Can’t You Hear Me Knocking”, “Bitch”, and many more Rolling Stones’ hits. Keys played on every Stones album from 1969 through 1973 and then from 1980 to the present. He’s been on all their tours since 1970 except the 1976 tour when Mick Jagger was mad at him. I said he has the best known sax solos, well how about these songs and acts. He played on Dion & the Belmonts’ “The Wanderer” when he was 14. At 15, he was playing with Buddy Holly & the Crickets and touring with Bobby Vee.

He first met the Stones at a Dick Clark concert in San Antonio when he was with Vee. He’s played on albums and toured with George Harrison (All Things Must Pass), The Who, Nilsson, Delaney & Bonnie, Leon Russell, Joe Cocker (Mad Dogs & Englishmen), Eric Clapton’s “After Midnight” and “Bell Bottom Blues.” He played with Ringo and on John Lennon’s “Whatever Gets You Through the Night.” More? He’s on albums by Keith Richards, BB King, Barbra Streisand, Ronnie Wood, Carly Simon, Warren Zevon, Keith Moon, John Hiatt, Leo Sayers, the Faces, Humble Pie, Lynyrd Skynyrd, Sheryl Crow, Martha Reeves, Etta James, Maroon 5 and Marvin Gaye’s “Let’s Get It On.” He has an amazing body of work. It probably can’t be matched in the industry.

He and Keith Richards were both born on Dec. 18, 1943. The two are almost grown up. They’re rock legends. They were the first rock & rollers to throw a TV off a hotel balcony. When asked how was it making the great album “Exile On Main Street” with the Stones at Richards’ mansion in the south of France, Bobby Keys said…” we were in our 20’s, we had money, cars, motorcycles, and wall-to-wall women. It was a good period. Keith and I shared recreational antics.” Keys became great friends with Mick Jagger in the early 70’s and was an attendant at Mick’s wedding.

The friendship became strained on the Stones’ ’73 tour of Europe when Mick fired Bobby after he allegedly missed some shows. It seems that Bobby and a lovely French lady filled up a bathtub with Dom Perignon champagne and Bobby drank most of it. He was down for the count for a few days AGAIN. Bobby was living in London at the time at Mick Jagger’s house. He had to leave and soon moved into John Lennon’s guesthouse. Yoko didn’t like him because he was a Rolling Stone who drank, cussed and hung out. I imagine most of you know that Yoko sang some pretty wild avant-garde songs withher as the lead squealer. While practicing with John & Yoko’s Plastic Ono Band, Yoko asked Bobby to make his sax sound like a frog on a leaf. He did and they got along fine after that.

Bobby Keys and the Attitudes will be playing a lot of the songs that Bobby’s known for, such as many Rolling Stones’ greats, Cocker’s “The Letter”, Holly’s “Not Fade Away”, Clapton’s “After Midnight”, Lennon’s “Whatever Gets You Through the Night.” It should be tremendous show. Join us for LANB Night at the Los Alamos County Summer Concert Series. Next week on Aug. 3, we’ll be at Del Norte Credit Union with Los Alamos’ Eddy & The Nomads. Sorry but they don’t have a website yet. They’ll be playing the great music of the 50’s and 60’s. It’s too bad that Bobby Keys can’t hang around and play with them. The Nomads will put on a wonderful concert. Get more info at www.gordonssummerconcerts.com.

There’s lots of stuff about Bobby Keys on the net. Google him. You can also see some cool stuff if you “friend” me on Facebook.