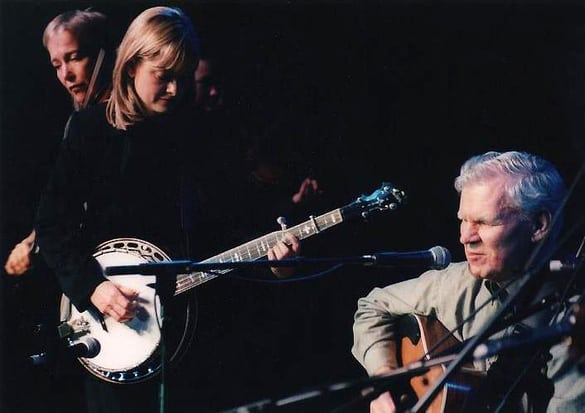 I was listening to the music of Laurie Lewis and Tom Rozum today thinking about what I’ll write for this article.

Tom was more of a rocker and said that he started listening to more and more Folk and American roots music after driving home to Connecticut following the infamous Woodstock Festival of August 1969.

Laurie started listening to the same in high school and college. I read that she really loved the music of the Dillards, the Greenbriar Boys, Ralph Stanley, Bill Monroe and Doc Watson.

Before I sat down to type, my son told me that Doc Watson died today.

What an incredible musician, an artist. Every folk music fan of the 60’s, 70’s and through today, love him.

He will be remembered as a legendary guitarist for at least the next 100 years. All folk musicians will study his guitar.

I’m certain that Laurie and Tom will honor Doc this Friday night during their concert at Ashley Pond.

Like all Los Alamos County Summer Concert Series shows, we start at 7 p.m. and it’s free.

The Series is paid for by the County and many businesses, professional and friends in town.

You can see who our sponsors are by looking at our fliers and at my website at www.gordonssummerconcerts.com.

Laurie Lewis has a very strong stage presence and is considered one of greats of Bluegrass and Folk music.

She won a Grammy for the album “True Life Blues: The Songs of Bill Monroe” in 1997.

Laurie and Tom were nominated for a “Best Traditional Folk Album” Grammy with their “The Oak & The Laurel” in 1995.

The duo has appeared on Garrison Keillor’s “Prairie Home Companion” many times.

She was raised and still lives in the San Francisco Bay area. Laurie is a fiddler, a guitarist and a bass player.

Tom Rozum grew up in Connecticut and after graduating from college moved to Arizona and started playing various styles of bluegrass and folk music.

He continued in San Diego until moving up to the Bay Area.

He’s been playing in bands with Laurie since 1986 including her Grant Street Band.

Tom’s premier instrument is the mandolin but he’s also an accomplished fiddle, mandola and guitar player.

Rozum is a tremendous lead singer as well as the ideal harmony partner for Ms. Lewis. Tom Rozum is also Laurie’s comic foil.

The Show will be Santa Fe Bandstand Night. We have very few sponsors who aren’t from Los Alamos and I’m always saying to please support our town and sponsors.

The deal is I’ve been working with the Bandstand for years now. We often work together by sharing acts so we can offer two nights of work in the area.

We’ll have a “LASCS Night” on their Plaza on July 5.

I’ve become very close friends with the members of their production team including David Lescht who passed away last month.

I plan on honoring David and Doc on Friday with a fabulous night of music.

I hope that you can join us.