‘Blue Jasmine’ is Humorous and Heartwrenching 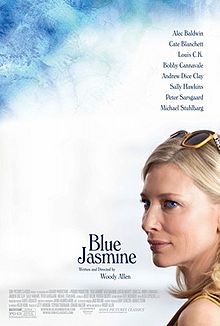 “Blue Jasmine” might make you feel blue. This doesn’t mean the movie is not good, but rather that it stirs up a mixture of emotions. You could be chuckling, yet feel pings of sympathy all in one moment.

Woody Allen’s movie is set in the present, but feels like it could have jumped out of  a Tennessee Williams play. “A Street Car Named Desire,” has a similar plot.

Like Blanche DuBois, Jasmine (Cate Blanchett) is a woman who is unraveling. Her upscale lifestyle vanishes after her husband, Hal (Alec Baldwin) is imprisoned for his many white-collar crimes, then Hal commits suicide.

Broke, jobless and widowed, Jasmine arrives at her sister’s apartment in San Francisco claiming she wants to start fresh. The tragedy is she can’t. The movie’s many flashbacks and Jasmine’s constant retelling of the story of how she and Hal met, reveal that despite her efforts, Jasmine is imprisoned in the past and too fragile, or too liquored up on endless gimlets, to break free.

Ginger (Sally Hawkins), Jasmine’s sister, has her own problems. While Stella had Stanley, Ginger deals with Auggie, her ex-husband, and her current beau, Chili (Bobby Cannavale.) Neither like Jasmine and Ginger is left scrambling to appease.

The triumph of the movie is in the superb performances by everyone in the film. Blanchett’s portrayal of a person whose mental illness is snowballing is both humorous and heart-wrenching.

My other favorite was Chili, a man who looks tough and street-savvy, but proves to have a soft underbelly, especially when he winds up sobbing and pleading to Ginger in the produce section of a grocery store after she breaks up with him.

All Woody Allen’s movies seem to have a quirk to them; the unconventional stories just reinforce that you are, in fact, watching movies by Woody Allen. I’ve seen one or two of his movies where I wondered if he would have preferred his name wasn’t associated with them. “Blue Jasmine” isn’t one of them. It’s a brilliantly strange tale.