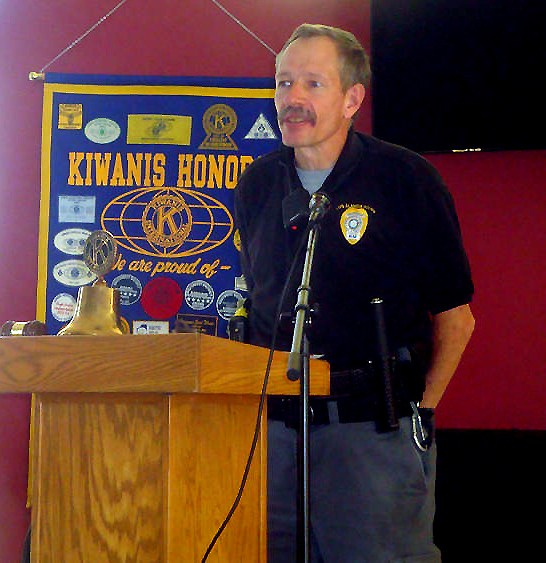 Ofc. Tom Beyer of Los Alamos County Animal Control spoke to Kiwanis recently, explaining rabies, a potentially infectious disease that can be transmitted to human beings through the bite of a sick animal.

The incidence of rabies in animals such as pet dogs and cats has been greatly reduced through vaccination. State laws now require that all dogs and cats be vaccinated against rabies unless a qualified veterinarian advises against the shots. However, the disease is still common in certain wild animals. Beyer said, for example, that 6 percent of wild bats in the United States are positive for rabies. (Nevertheless, he said, bats are valuable because each one eats thousands of insects a year.)

Skunks also can be significant sources of rabies. A couple of years ago, he said, Eddy County in New Mexico had 36 skunks test positive in a single year, and, in addition, six dogs had to be euthanized.

Ferrets and raccoons can catch the disease. In fact, any animal that is carnivorous or omnivorous can get rabies. Once an animal has the disease, the symptoms are far from subtle. Some infected animals become abnormally friendly to human beings; some attack viciously and seem unusually strong; and some stagger and drool and are obviously sick.

The last rabies death in a human being in the United States was recorded in 1977, Beyer said, but approximately three people per year still catch the disease in other countries and then come to the U.S. and die.

Worldwide, he said, about 50,000 people per year die from rabies. He added, however, that the situation is “getting better.”

Progress is being made in curing the disease. The “Milwaukee Protocol,” which involves medically-induced comas using ketamine, actually produces a 10 percent to 15 percent survival rate. Famous veterinarian and author James Herriot first noticed the coma-related survival phenomenon in 1930s. He saw it in a case involving a lamb.

So what can people do to keep the disease in check and avoid deaths? Beyer urged his listeners to make sure that pet dogs and cats get their shots on time. “We have them all vaccinated at the shelter,” he said. Don’t touch (or let children touch) an animal that is acting sick, strange or aggressive. And if someone gets bitten, he should be taken to a doctor immediately. It can take 10 days or even as much as six months for the disease to begin to produce symptoms. A series of shots (six now instead of the 60 in the stomach that were routine in the 1950s) can save someone who has been bitten by a rabid animal if the virus hasn’t yet traveled to the brain.

Some human beings need to have shots on a regular basis. Beyer, for example, noted that he should be vaccinated. He is called upon to do such things as removing bats from buildings (Mesa Public Library just recently.) He uses thick, leather gloves when doing such work. Cavers should get shots because bats are so common in caverns. And in Los Alamos, if you find a bat in the house, you should have it euthanized and tested. Bat bites can be very subtle, he noted. You might be bitten and not even realize that you risk rabies.