Battle of the Bands July 4 at Overlook Park 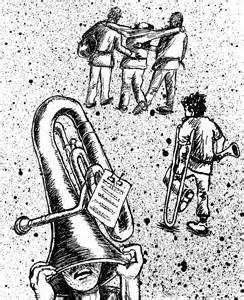 This week the Los Alamos County Summer Concert Series  will be at the Thursday, July 4th Kiwanis Fireworks Spectacular event at Overlook Park in White Rock.

Music for the July 4th festivities includes a Battle of the Bands.

(3-5 p.m. next to the bandstand – join the crowd for the “Thrill of the Grill” Chicken Challenge Cook-off between Police and Firefighters!)

6:45 p.m. Announce winner of Battle of the Bands and encore song by them.

8:30 p.m. Best Seat in the House Drawing and announcements.

Let me tell you about funk music and Yo Mama’s Big Fat Booty Band. If you like the name of the band, you’ll probably love the concert.

Friday, July 12 we’ll be back at Ashley Pond with a great band from Nigeria and Ghana called the West African Highlife Band. This show will be our KTAOS FM 101.9 Night. Oh! OK, here’s more about our great funk band YMBFBB. They started out as a party band, evolved into a sound and are now an institution out of Asheville, NC. They say, “…Their goal is to shake the world, one cheek at a time.” A lot of their fans refer to them as “The Booty Band”.

The Booty Band call themselves “nu funk” since they take elements of 70’s funk and fuse it with some of the other music of today that they love like soul,hip-hop, electronica,New Orleans brass, dub-reggae, Afro-beat, Latin, jazz and rock. Their favorite bands and influences include George Clinton and Parliament, Galactic, Red Hot Chili Peppers and Primus.

You’ll hear the early sound reminiscent of the funkiest, Little Richard and James Brown. Early Motown and Sly Stone funk may move us but it’s the sound of something like Funkadelic that’s going to make you shake your booty tonight. They’re still a party band and their philosophy is for them and their audience to have great fun and feel good. Some of the covers that we’ll probably hear include music by Dr. Dre, Snoop Dogg, Allen Tousant, Rage Against the Machine, the Doors and Bill Withers.

If you’re not that sure about what funk is, it’s music that deemphasizes melody and harmony in favor of rhythm; the rhythm of the bass and drums. Guitars are often used as a percussive instrument although the YMBFBB’s guitarist is outstanding. The whole band is tremendous but it’s their bassist that really moves them. Check them out on youtube and at www.nu.bootyband.com. Next week is the West African Highlife Band.