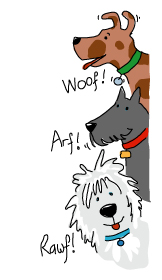 During the summer months, residents like to spend more time in their back yards, as well as wanting to enjoy the cool breeze during the evening hours by having windows open to their homes.

Because of these lifestyle changes during warmer weather months, subsequently, Animal Control officers typically receive more calls about barking dogs than they do at any other time of the year. Several residents ask officers each summer about enforcement or citations when it involves barking dogs.

When an animal control officer receives a complaint of a barking dog that is creating a nuisance, they will respond and try to determine why the dog is barking, and how long the dog has been barking. The officer will then attempt to make contact with the dog owner to advise them of the disturbance and see what steps can be taken to alleviate the problem.

Animal control officers are aware that dogs bark occasionally in the natural course of the day, and it would be unreasonable to enforce or promote a “no bark policy.” It is not the intention of the animal control staff to create an impression that dogs are never allowed to bark. The occasional bark from a dog will not result in enforcement action.

However, frequent or incessant barking does create a nuisance for other neighborhood residents. If the officer determines that the noise is excessive, and is indeed creating a neighborhood nuisance, he/she will issue a warning notice to the animal owner. If the problem continues, but the owner demonstrates that he/she has taken reasonable steps to alleviate the problem, they will be allowed a second warning notice.

Examples of reasonable steps might include keeping the dog inside when owners are away, having the dog stay with a friend when owners are on vacation, or purchasing a no bark collar. Most situations are resolved upon issuance of a second warning.

In the few cases that are not resolved, if subsequent complaints are received by Animal Control officers and follow up visits determine that the dog continues its excessive barking, the owner will receive a citation to appear in Municipal Court. It is important to note that, although Animal Control receives several hundred barking dog complaints each year, the actual number of citations issued is less than a dozen a year.

Most dog owners desire to be good neighbors and may not even be aware that their dog is barking when they are away from home. Once concerns are brought to their attention, they will voluntarily address the issue and resolve it without any need for further police enforcement or citations.

Residents with questions are encouraged to contact the Animal Control division at 662-8179.