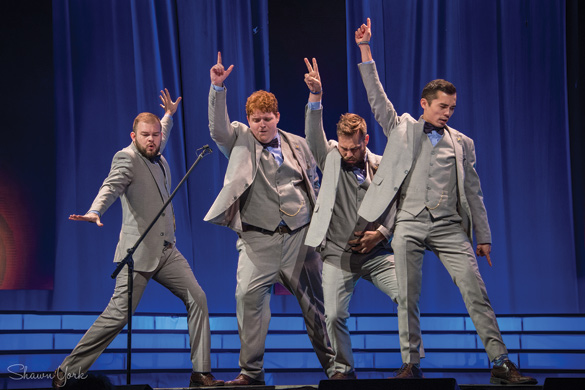 The Lads of Enchantment (LOE) and The Santa Fe Harmonizers (SFH) barbershop choruses will jointly present the 2016 Annual Barbershop Harmony Show on Friday and Saturday, Nov. 4 and 5 at the United Church of Los Alamos.

The underlying themes of “Let there be Peace” are love, reconciliation and peace – seasoned with humor. The show is produced and directed by Maurice Sheppard and narrated by Stan Bennett.

Among this year’s show songs are John Denver’s “Annie’s Song”, “Breaking Up Is Hard To Do”, “Drivin’ Me Crazy”, “South Of The Border”, “Teddy Bear” and “Let There Be Peace On Earth”. The LOE and SFH choruses will sing together throughout the show.

The Harmonizers were the first barbershop chorus in Northern New Mexico and the root of the LOE.  The LOE was founded later by Los Alamos members of the Harmonizers who, without the LOE, would have to travel to Santa Fe to sing.  This year, Maurice Sheppard has been directing both the Harmonizers and the LOE in preparation for the show.

The show’s Special Guest Quartet headliner is a talented, up-and-coming quartet from California, The Newfangled Four (TNF).  Not only does TNF sing, TNF entertains.

TNF was founded in 2012 by Joey Buss (tenor), Jackson Niebrugge (lead), Jake Tickner (bass), and Ryan Wisniewski (baritone).  Besides singing in the quartet, the young men are also joint members of the award-winning Westminster and Master of Harmony choruses in California.  As such, TNF’s members have also won gold medals when their choruses have won the BHS International Chorus Competition.

In 2014, TNF stepped up to compete in the BHS’s International Open Quartet Competition, where they placed 16th and received The Dealers’ Choice Award for being the highest-placed first-year competitor.  In 2015, TNF improved to 14th place, and this year they placed 11th, just missing the coveted “top ten”.

The show will begin at 7:30 p.m. each night. On Friday night, there will be an “Afterglow” in Graves Hall following the show. The Afterglow entails a snack and additional singing for a suggested donation of $5.

Advance tickets ($15; or $5 for students) may be purchased at CB Fox or from chorus members.

See www.ladsofenchantment.org for links to TNF.