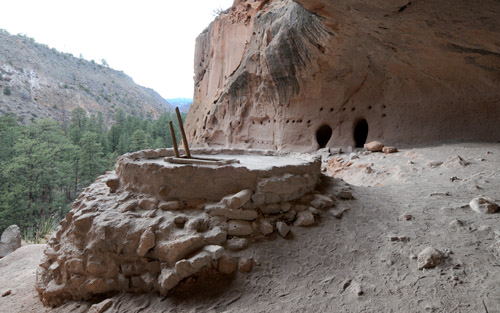 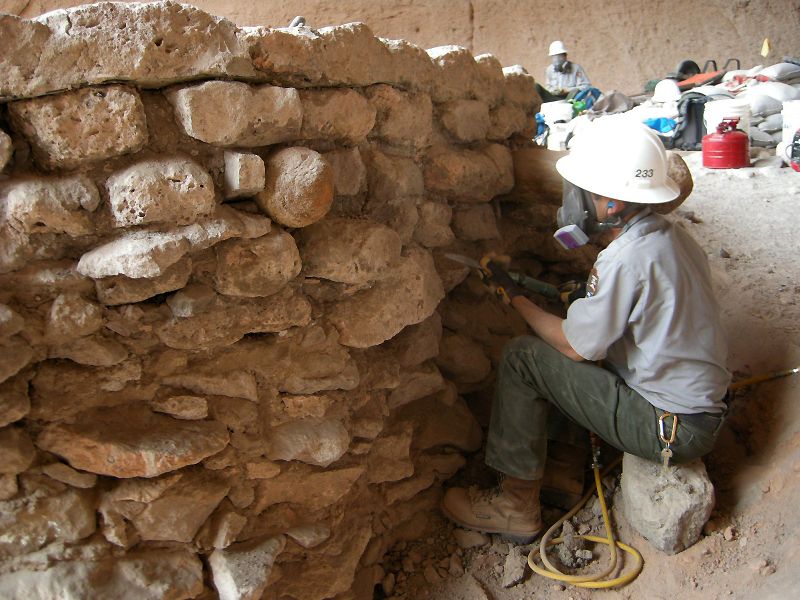 A member of the Bandelier Vanishing Treasures crew using a special hand-held air hammer to loosen and remove cement from mortar joints in the kiva wall in Alcove House. Courtesy/NPS

In April, the staff at Bandelier National Monument closed it when the reconstructed kiva inside became unstable and unsafe. The monument’s Vanishing Treasures crew has been working on the Ancestral Pueblo structure, and although the kiva itself will remain closed, visitors  will once again be able to climb the famous long ladders and enjoy the view from 140 feet above the canyon floor.

The repair crew has successfully removed the kiva’s buttressing wall, which had developed huge cracks, with tons of cement and stone threatening to come loose and fall. When this overlying layer was removed, the workers found surfaces that had not been seen in a hundred years, a combination of the original Ancestral Pueblo walls and work that was done in the first stabilization project back in 1910. 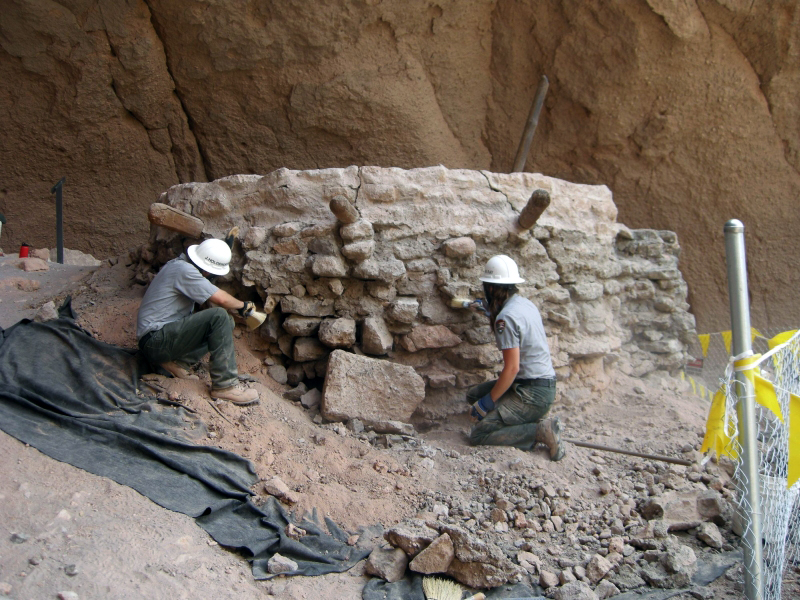 The crew preserved what was there and re-mortared spaces where needed. Visitors will now see these walls, showing the current repairs as well as with mortar still in place from the 1400s. Additionally, the park’s Historic Preservation staff replaced the ladder at the bottom of the ascent; replacing each of the four ladders is a continuing process as time, weather, and use take their toll.

The next stage in the project is to replace the kiva roof, since in the early reconstruction it had not been built to withstand today’s heavy visitor usage. The roof needs sturdier roof beams, arranged to distribute weight so that the load is placed more evenly on the kiva walls. When this work will be done is dependent on agency budgets. In the meantime, visitors will be able to get close to the kiva walls, but not climb onto the roof or go down inside.

Through the work at Alcove House, all the other display archeological sites at Bandelier have remained open and available to visitors, including the cavates and short ladders along the Main Loop Trail and at Tsankawi. As Bandelier Superintendent Jason Lott said, “We will be glad to have Alcove House open again for visitors to enjoy, especially knowing that a serious safety hazard has been dealt with. There are so many interesting places to explore in the monument, and it’s great to have this one available again.”

Visitors coming to Bandelier need to stop in White Rock to catch a shuttle bus unless they arrive at the park before 9 a.m. or after 3 p.m. For information, contact the Bandelier Visitor Center at (505) 672-3861 x 517, check the official website at www.nps.gov/band, or follow on Facebook at BandelierNPS.