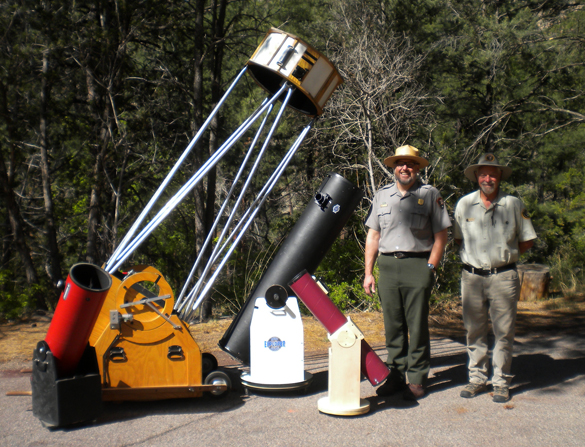 Bandelier Ranger Geoff Goins and volunteer Rick Hiestand with some of the telescopes they will have available for Night Sky programs this summer at the monument. Courtesy/NPS

Bandelier National Monument now has not only a ranger who has a telescope so giant that you must step up a ladder to use it, but a volunteer who has one, too – and they’re planning to provide lots of chances for the public to enjoy all the stars, planets, and other marvels to be seen in local dark night skies.

Ranger Geoff Goins arrived at Bandelier in September after working in Bryce Canyon National Park as the Night Sky Coordinator. He also teaches astronomy at UNM in Taos. Besides doing the usual ranger duties at the Bandelier Visitor Center, he’ll be offering Night Sky programs on Saturday nights through the summer. On nights in May and June when the moon is too bright to let the stars be visible, he’ll be offering Moonlight Walks out along the Tyunoyi Overlook Trail.

Goins persuaded Rick Hiestand, with whom he had done programs at Bryce, to come to Bandelier and help out with the star programs here – and to bring his giant telescope along. Hiestand has been an avid amateur astronomer for decades, and an astronomy volunteer at Joshua Tree, Glacier, and Bryce Canyon National Parks.

Bandelier’s first Night Sky program of the summer will be 8 p.m.May 9 at the Juniper Campground Amphitheater. Weather permitting; Goins and Hiestand will present an astronomy program followed by viewing celestial objects through the giant telescopes and others as well. According to Goins, “Visitors can enjoy seeing the moons and cloud bands of Jupiter, huge stellar nurseries containing thousands of stars, and the whirling arms of spiral galaxies, as if they were almost at arm’s reach.”

For general information about Bandelier, check the park website at www.nps.gov/band, and current news can be found on the Facebook page, BandelierNPS.