Bandelier and Los Alamos Guild of the Santa Fe Opera Announce Next “Opera on the Rocks” is Sept. 21 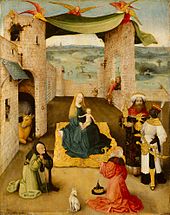 Menotti was inspired by The Adoration of the Magi (Hieronymus Bosch, died 1516) to create Amahl and the Night Visitors. Courtesy/wikipedia

Bandelier National Monument and the Los Alamos Guild of the Santa Fe Opera will present “Opera on the Rocks” Saturday, Sept. 21 at Bandelier.

This second annual event will feature AMAHL AND THE NIGHT VISITORS by Giancarlo Menotti, an Opera Alta production.

Ross Click, soprano, is an incoming freshman at Los Alamos High School, plays bass in orchestra, dances with New Mexico Dance Theater, and in 2012 originated the role of Kayll, Petra’s alien best friend, in the Sci-Fi musical “Petra & the Jay.”

Alicia Solomon, mezzo soprano, has appeared repeatedly over the past three decades with premier local arts organizations such as the Santa Fe Opera, Santa Fe Symphony, and the Desert Chorale. She is Music Director for the Unitarian Church of Los Alamos, and teaches voice, piano, and guitar. (For more, visit www.aliciasolomon.com.)

Dr. Andre Garcia-Nuthmann, tenor, is Professor of Vocal, Choral, and Piano Studies at New Mexico Highlands University in Las Vegas; and has also appeared frequently with the Santa Fe Opera, Symphony, Desert Chorale, and Opera Alta. He and Alicia have been making beautiful music together since 1988.

Tjett Gerdom, baritone, is originally from Iowa and has a degree in Music Education from Cornell College. He has been a featured soloist in Brahms’ Requiem and Handel’s Messiah. Tjett lives in Los Alamos with his wife, Katie, and their two Samoyeds, Tia and Hodor.

Jeffrey Click, bass, is an IT Team Leader with LANL; previous careers include massage therapy and teaching bilingual kindergarten. He attended the American Institute of Musical Studies in Graz, Austria, where he and Alicia met; they married in 1992, and have two children.

Brian Huysman, pianist, landed in Los Alamos in 2011 after 30 years at NASA in Houston. With decades as a church pianist, in a Big Band, and more than 45 musical theater productions behind him, Brian marvels that only in New Mexico, would he be able to combine his passion for opera with his passion for hiking and backpacking. Brian played for last year’s “Mozart on the Rocks” and “Petra & the Jay.”

Since 2006, Opera Alta (Alicia Solomon, Director) has presented performances across northern New Mexico of arias and ensembles from opera and musical theater, a condensed H.M.S. PINAFORE, an original Sci-Fi musical, and last year’s “Mozart on the Rocks” at Bandelier.