Back With A Vengeance … Don Giovanni Scores At Santa Fe Opera 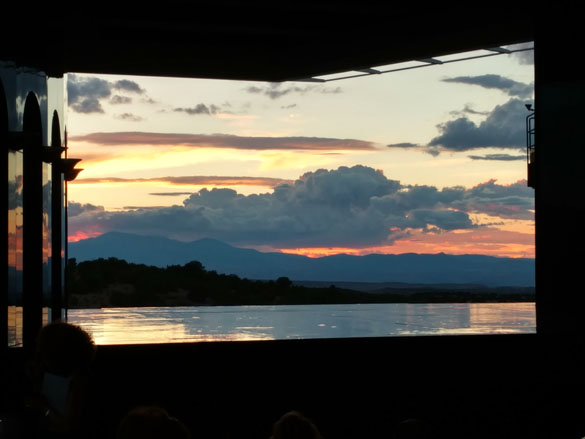 A goreous sunset posed for the opening of Don Giovanni at the Santa Fe Opera July 3. Photo by Roger Snodgrass/ladailypost.com 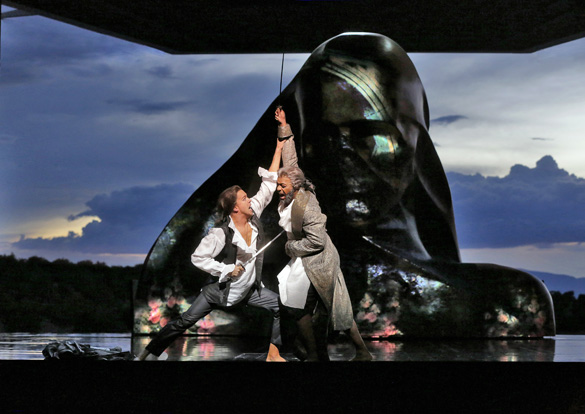 For starters, the audience finds an open backdrop of the darkened stageframing the sunset, which could not have been more obligingfor Saturday’s opening night. As one takes a seat and recognizes the scene, the familiarviews of the Jemez Mountains, areswept away by an illusion of a sky-blue lake shimmering into the horizon.

Enter, one at a time, 14 black-coated servants with powdered wigs who take up their stations, half on each side of the stage, to watch the sun go down. We are somewhere in Mozart’s time zone, otherwise known as the late Enlightenment, but it is an abstract space in a stylized world, Daniels has said, with Spanish colors and costumes from about 1770 to 1785, just before the French Revolution.

Then, with an unmistakable groan of doom from the orchestra, a mysterious object begins to emerge from a lump on the horizon until it dominates the stage. It has the shape of a head, or rather a death-skull with sockets for facial features. Something foreboding and mutable, slowly changing texture and color, it will prove to be the correlative of play,fantastic perhaps but mortifying if it is not placated.

In this production the set is not always required to be at the service of the characters. It has a multidimensional life of its ownthat Daniels and scenic designer Riccardo Hernandez have served up. The garden where Don Giovanni jilts Donna Anna and then kills her father, arguably in self-defense, is a cosmic black space in which nobles and servants cross paths to their fates on the other side.

By the time Mozart composed his morality tale of Don Giovanni, the legendary character of Don Juan was already more than ahundred and fifty years-old, first appearing on stage in a play, “The Trickster of Seville,”bya Spanish playwright under the pen name, Tirso Molina.

Don Giovanni comes from a long line of rakes and womanizers.To make matters worse, he is noble and handsome and cocksure, and if that is not enough, he is not averse to making false promises and telling whatever lies are required.Don Giovanni’s servant Leporello (played with a humorous flair by Kyle Ketelsen) keeps a list of his master’s conquests. Leporello’s“laughing violin” does an 18th century fanfare when he reveals the stunning fact that his master has had1003 conquests in Spain alone (not to mention 640 in Italy, 231 in Germany, 100 in France and 91 in Turkey). Played by dashing baritone Okulitch, Giovanni is a formidable predator, and his transgressions are never cut and dried, so he always seems to have a good excuse or a convenient escape route.

In the course of his escapades, Don Giovanni jiltsthree sopranos, beginning with the fierce and vengeful Donna Anna (Leah Crocetto). He kills her father, the Commendatore (Soloman Howard), arguably in self-defense, and then turns around and fends off the determined Donna Elvira (Keri Alkima) whom he has left in the lurch. His final effort is aimed at Zerlina (Rhian Lois) a flirty bird and bride-to-be, whom he plucks from her wedding party from under the nose of her incredulous future husband.

There are fights and sword play interspersed with soul-searching music.Because Mozart.inspired by Lorenzo Da Ponte’s libretto. produced such a rich opera in vocal and orchestral writing, it demands attending many performances to fully appreciate it. This classic model of an Italian“drammagiocosa,” half serio(serious) and half buffo(comic) has wonderful bel canto arias from Anna and her equivocal suitor, the tenor Ottavio (Edgaras Montvidas), who compensates for his week-kneed action with exuberant singing. One does not miss the dramatic action during these lengthy interludes of exalted music.

Moments to savorincludethe final scene of Act I, which takes place in a ballroom signified by torches and populated by a chorus of masked dancers, peasants and aristocrats. Upon close inspection one can hear Mozart delivering three different tempos that are blended into a harmonious and evocative whole. After the intermission, toward the end of the first scene of Act II, Don Giovanni serenades a whole neighborhood of tenements trying to draw out another prospect, Elvira’s maid.  He succeeds in wooing the lonely hearts throughout the quarter.

Special features of the Santa Fe Opera are the half-hour Prelude Talks given twice before each performance with a very knowledgeable speaker providing basic information as well as impressions of that evening’s performance. On opening night of Don Giovanni we heard Oliver Prezant talk about the characters and their musical motifs and the way death hangs over this production – in a space not a place. He described the music associated with life ebbing out of  Commendatore, slain by Don Giovanni. This music is repeated when Commendatore’scoffin is in the center of the space.

Never out of mind when his daughter Anna and her suitor Ottaviohave the stage for deploring the crime and its perpetrator, the matter of the Commendatorehaunts Don Giovanni, to put it mildly, with a vengeance.

The Don Giovanni character has had numerous treatments. Richard Strauss wrote a tone poem ‘Don Juan’ which gives an abstract feel for the character. Sir Denis Forman, a prominent television executive and patron of the Royal Opera in Covent Garden wrote that Da Ponte and Mozart gave us the best DonGiovanni, Casanova or Don Juan, and George Bernard Shaw called Don Giovanni the greatest opera ever composed. Forman said that it didn’t stop Byron, Merimee, Balzac and Bernard Shaw from recreating the character.

Don Giovanni returns to the Santa Fe Opera after a seven year absence and should be enthusiastically welcomed back. 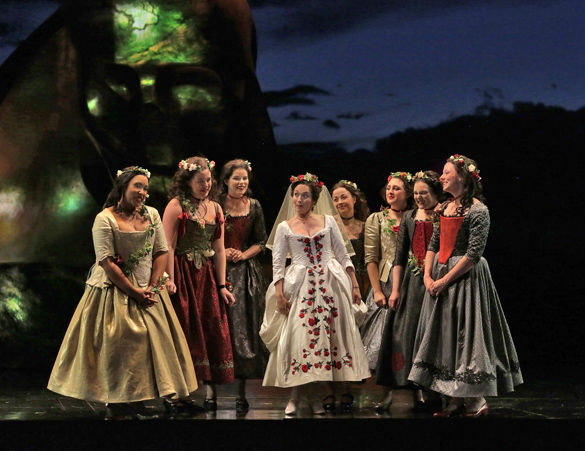