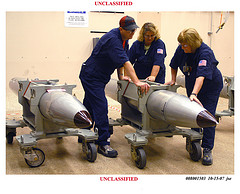 Pantex production technicians prepare a B61 for a surveillance test. The B61 is a tactical thermonuclear gravity bomb. Courtesy/NNSA

WASHINGTON, D.C. – As part of the ongoing effort to refurbish the aging B61 nuclear bomb without resorting to underground nuclear testing, two successful B61-12 radar drop tests were successfully completed at the Tonopah Test Range in Nevada on Aug. 14 and 15, 2013, by engineers from Sandia National Laboratories.

Current B61s use decades-old vacuum tubes as part of their radar system. The new radar system, which had not been tested outside of a laboratory environment, was assembled in a gravity bomb configuration and successfully functioned as it was dropped from a helicopter.

“The B61 contains the oldest components in the U.S. arsenal,” said Don Cook, National Nuclear Security Administration Deputy Administrator for Defense Programs. “As long as the United States continues to have nuclear weapons, we must ensure that they remain safe, secure and effective without the use of underground testing. The B61 has been in service a decade longer than planned, and our refurbishment program is a scientific and engineering challenge. These successful tests have given us confidence in our ability to integrate the new radar design and move forward with our efforts to increase the safety and security of the bomb.”

The Nuclear Weapons Council, a joint Department of Defense and Department of Energy/NNSA organization established by Congress, moved the B61 Life Extension Program (LEP) from the planning stages to development engineering in February 2012. The scope of this LEP includes refurbishment of both nuclear and non-nuclear components to address aging, ensure extended service life, and improve safety, reliability and security of the bomb. With the incorporation of a new Air Force tail kit assembly, the design will also enable consolidation and replacement of the existing B61-3, -4, -7, and -10 bombs by the B61-12 bomb. The LEP will reuse or remanufacture existing components to the extent possible.

This radar drop test is one of several critical milestones for the B61-12 LEP this year. Radar testing will continue with integration of other B61-12 components, including the weapon and firing control units to demonstrate the arming, fuzing and firing subsystem. The B61-12 LEP is an essential element of the U.S. strategic nuclear deterrent and of the nation’s commitments to extended deterrence and it ensures the continued vitality of the air-delivered leg of the U.S. nuclear triad.

Established by Congress in 2000, NNSA is a semi-autonomous agency within the U.S. Department of Energy responsible for enhancing national security through the military application of nuclear science. NNSA maintains and enhances the safety, security, reliability and performance of the U.S. nuclear weapons stockpile without nuclear testing; works to reduce global danger from weapons of mass destruction; provides the U.S. Navy with safe and effective nuclear propulsion; and responds to nuclear and radiological emergencies in the U.S. and abroad. Visit www.nnsa.energy.gov for more information.