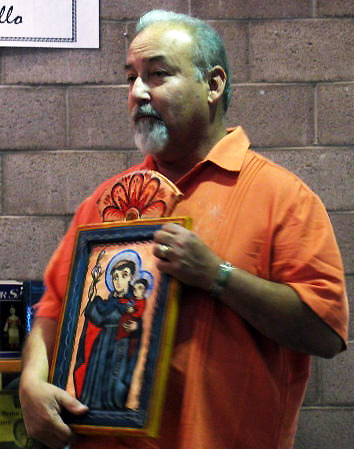 Santos, carved and painted images of saints, are more than just pretty pictures. Traditions and stories also are woven into these works of art.

The stories can be incredible testimonies, not only of people’s faith, but also of human nature. They bring to mind well-known tales or even personal memories within a family.

The chance to share these stories is one of the reasons New Mexico Santero or Saintmaker, Charles Carrillo, creates his art. He shared a few stories during the Authors Speak talk Thursday at Mesa Public Library.

Carrillo is an award-winning artist as well as scholar, teacher and lecturer. He has a doctorate in anthropology and archeology and works as an adjunct professor at the University of New Mexico.

He has written several books and numerous articles. His work garnered many awards, including the 2006 Lifetime Achievement Award at the Spanish Market, which, Carrillo said is “the biggest honor of my life.”

His work is on display in Mesa Public Library’s gallery. The show will run through Friday.

Making religious artwork was not something Carrillo considered doing as a young man. However, when he was working at an archeological site in Abiquiu, he became intrigued by the art he saw at the site and began studying it.

“I have fooled around all my life as an artist,” Carrillo said, and joked that he began his career in the field when he colored in coloring books as a child. Studying Santos lead Carrillo to create his own retablos, which he paints on pine panels and glazes with gypsum, as well as bultos or sculptures. At first, he would create a Santo, then another, and then another before giving them away or giving them as Christmas gifts. Meanwhile, he studied the traditional paints and colors and began to apply them in his work.

He also made sure to know the subjects that appear in his work. Some, such as St. Anthony, the patron Saint of lost objects, hold a personal significance to Carrillo. He explained his grandmother maintained a large garden and while planting chile seeds, she lost her wedding ring. So, “she took out her spanking-new statue” of St. Anthony and stuck it in a hollow of tree to find her ring, Carrillo said.

However, by the end of the summer his grandmother’s wedding ring was not recovered, Carrillo said. So, during the harvest time, she pulled the statue from the tree, but while she was walking, she tripped and the statue slipped out of her grasp. When she picked it up again, stuck to the bottom of the statue was her wedding ring.

“He came through for her,” Carrillo said.

During his talk Thursday, Carrillo presented one of his artistic depictions of St. Anthony. The saint traditionally appears in a blue robe, beardless holding a palm branch or lily as well as the Christ Child.

He said, “I hope no matter who buys [my work], they learn the stories.”  For instance, St. Isidore, the patron saint of farmers and good neighbors, reveals a story about the importance of having good relationships within the community. Carrillo said Isidore was greeted by an angel who warned him to stop working on Sundays and go to Mass or he would be punished. Isidore ignored the warning and was greeted by a series of plagues. The angel visited him one more time and said if Isidore did not go to Mass on Sunday, he would be punished with a bad neighbor. With that, Isidore went to church.

Isidore’s story and the many other stories are important to tell, Carrillo said. Unless the stories and the traditions are passed on, “the tradition is for naught.”

He added, “Every Santo I make is trying to tell a story.”

While he also has painted saints in contemporary fashion─he did an entire show of saints behind the wheel of cars, “I can still tell the stories.”