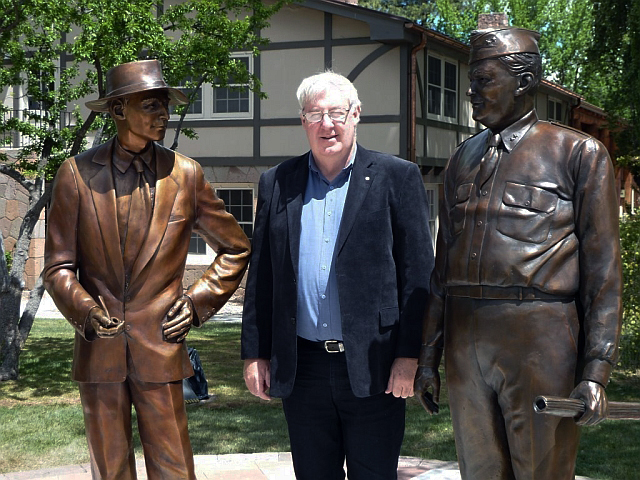 John Kevan, Rotary District Governor from Perth, Australia visited Los Alamos in May 2011. He made a special point to visit Los Alamos on his way to the Rotary International Convention in New Orleans.

Kevan contacted Los Alamos Rotarian Linda Hull, club secretary at the time, who arranged for Georgia Strickfaden of Buffalo Tours to meet him at the ABQ airport and give him tours of Lamy, Santa Fe, Bandelier and Los Alamos. Kevan was surely the very first Australian to be photographed with the Oppenheimer and Groves statues, which were installed during his brief stay.

Kevan e-mailed the Los Alamos Rotary Club in October saying, “The other news is that I have written a book, Cockatoo Conspiracy. It is based upon an idea started 15 years ago, and I only firmed up the story after visiting you in Los Alamos.  In 1945, an atomic bomb from Los Alamos via Tinian ends up missing in North West Australia. Cockatoo Island is in the Kimberley region of Western Australia. About 20 percent of the book is about activities in Los Alamos. It is available on Amazon Kindle and other eBook systems. I acknowledged the great hospitality I received from the Rotary Club of Los Alamos in the book. It is fiction, but I hope you enjoy and your members enjoy reading it.”

“I was taken by surprise by John’s first e-mail, as I’d never been contacted by a Rotarian of such international distinction,” said Los Alamos Rotary Club’s Immediate Past President Linda Hull. “We became fast friends over two Rotary dinners that included New Mexican cuisine and his first marguerita. He has a broad smile, a hearty laugh, and an even bigger heart. To me, John is an exemplary Rotarian: dedicated, forward-thinking, motivated, a hard worker, and a leader. He is a man of eloquent words and respected action. We remain in touch and I draw inspiration from his many good works Down Under.”

From Amazon.com: “In September 1945, Captain Chuck O’Donnell and the aircrew on board the B-29 transport known as Daisy Mae, were ordered to fly from Darwin to Learmonth, with seven Australian nurses on board, but were diverted to Broome for engine repairs. The nurses, led by Jenny Hopkins-Jones, were sent on to Perth, and the B-29 was ordered to return to Darwin. Daisy Mae never made it. — During the previous months, Chuck and Jenny had become very close, meeting frequently in Port Moresby. When Chuck was reported missing, Jenny was devastated, as she was pregnant with their daughter Elizabeth, who grew up and joined the Australian Military Intelligence Organization (AMIO). Elizabeth became involved in the search for Daisy Mae, meeting Commander Tony Dowling on HMAS Murray, near Cockatoo Island.”

Kevan is very active in Rotary and reports that he has recently been involved in successful projects in Nepal and has visited Sudan. He now serves as a coordinator for the Rotary Foundation Humanitarian Grants (water and sanitation) program and sees a great deal happening in global grants. He and his wife Melodie, who will be District Governor in 2015-16, both attended the Rotary International Convention in Portugal this year.