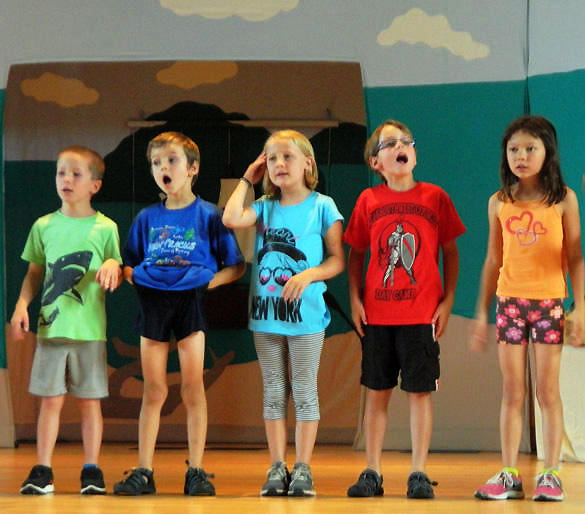 With a cast of young thespians, Missoula Children’s Theater tells classic children’s stories but with a twist. These productions are more than just fun entertainment, however; they provide valuable life skills to participants.

Auditions begin at 9:30 a.m. July 25 at Crossroads Bible Church. Children who are entering first through 12th grade are welcome to attend. If selected, performers will spend the week learning the play and then perform it for the community July 30. The show begins at 7 p.m. at the church.

Dickinson and Coates have put on many productions of the Grimm’s fairy tale for most of the spring and summer. The two co-directors have traveled to Washington state, Idaho, Wyoming, Texas and Colorado. They estimate to have logged in between 15,000-20,000 miles on their van.

Still, it’s a job Dickinson and Coates both relish.

Coates said she is a former Missoula Children’s Theater performer and now she enjoys seeing the other side of the performing arts organization. Plus, she said, she enjoys working with the kids who “make it a great experience every week.”

Dickinson said despite re-telling the same story every week, each production is different because the young performers bring their own styles to the stage.

He added, the participants have the chance to learn life skills.

“I feel there’s so much to learn through the arts…and I just love being able to be apart of that,” Dickinson said.

Coates added, “The kids are learning and having fun at the same time.” She said through the week of rehearsals, children become comfortable with speaking in front of strangers.

It’s not just the children who are learning things, Coates said she and Dickinson are learning from their young performers.

“You learn something new each week from the kids,” she said.

The directors also said they gain some great memories. Coates said one week, a participant wasn’t embracing the experience and wanted to know when the program would be over. When the day of the show arrived, her mind had changed and she proclaimed it was the best day of her life.

Dickinson recalled another performer who was also having a tough time. The little boy said he was tired. When Dickinson asked him if he needed to take a break, the boy responded, “No; as the great Houdini said, ‘the show must go on!’”

Coates and Dickinson bring a lot to their productions. Dickinson has degrees in early childhood development and musical theater. Coates also studied theater and minored in voice.

Missoula Children’s Theater is sponsored by Los Alamos Arts Council. The auditions are free but the cost to participate in the program is $35. Tickets for the performance are $10 or $5 for children age 12 or younger.