The Deal Down Movie Reviews by Rick Asterman 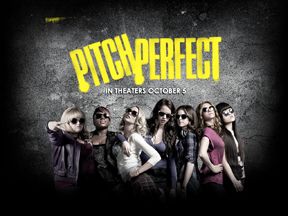 Advisory – Gleefully vulgar. The whole time I was watching the film, I was convinced of two things: how unbelievable I felt actually enjoying the movie, how obvious it was the film was just barely pared down from an R-Rating. Any kid mature enough to watch the original Austin Powers movie should be fine with Pitch Perfect, but it still remains a judgment call for the parents.

The greatest positive of writing movie reviews is when, against all odds, the film you’d instinctively avoid otherwise inverts your expectations. Pitch Perfect is just such a film.

The film focuses on the rivalry between two Barden College a capella groups– the all-male Treble Makers fronted by Workaholics Adam DeVine, and the Bella’s, a ladies-only group down to two members (Brittany Snow and Anna Camp). Skylar Astin and Anna Kendrick are quickly recruited into their respective gender’s vocal squads to follow the musical/rom-com/gross-out/college/high-school comedies’ well-trodden paths. Like the best of all said genres, the easily seen path is made a worthwhile trip.

My highest praise goes to Pitch Perfect for being a musical loaded with songs I absolutely despise (Rihanna’s “S&M,” Miley Cyrus’ “Party and the U.S.A.,” and David Guetta’s “Titanium” among others) and giving every single one of them great arrangements. I’ve always been a believer that even the worst songs can be arranged, merged, and/or covered into something fun, and Pitch Perfect’s score succeeds.

The best thing about Pitch Perfect is that it manages to have a diverse cast of characters, and actually turn them into characters rather than after-school specials, or punching bags for insecure writers to vent on. Women have conversations with other women that aren’t just about sex. The bully character has no ulterior motive; he’s just a dim bulb looking for a good time. Fat women manage to not bring up their weight in every conversation. Social and personal problems feel like they belong in a universe inhabited by human beings. The differences that separate the cast matters, but they’re own personality also matters, which was my single biggest worry heading into the film, and a worry I couldn’t be happier to see proven wrong.

The best analogy I can think of for Pitch Perfect is if Judd Apatow and Trey Parker teamed up to make a film about Ryan Murphy, but were forced to edit it down to PG-13 by producers. While thinking of that analogy, I had no idea the film was directed by Avenue Q’s Jason Moore, who’s partner-in-crime Robert Lopez went on to help Trey Parker and Matt Stone produce Book of Mormon. The second I found that out, any shame I had about enjoying Pitch Perfect evaporated. To anyone still holding their own, I promise if you’re afraid of looking silly in the movie theater, Pitch Perfect is a worthy film for any man to sacrifice his dignity on.

Advisory – Quite violent, decently vulgar, and sprinkled with tasteful nudity: But nothing in Seven Psychopaths should keep an old enough audience from seeing it with anybody who’d like to go with them, and still keep eye contact upon leaving the theater.

Marty Faranan (Colin Farrell) is a struggling Hollywood writer with an eye on his screenplay concerning the tale, or tales, of the film’s titular “psychopaths.” Interestingly enough, Faranan doesn’t want to tell a straight up psychopathic shootout story, but rather promote a positive, humanistic message in his film that just happens to be populated with psychopaths. Along the way, Faranan seeks the guidance of oddball Hans Kieslowski (Christopher Walken) and flees the guidance of his Durden-esque friend Billy Bickle (Sam Rockwell). To say anything else outside praising Woody Harrleson’s brilliant performance would be giving too much away, and as a testament to Seven Psychopath’s foundation, I’m not sure how much of that’s a bad thing.

Seven Psychopaths, to its credit, dares to examine the quirky, violent, Tarantino-esque films of the past two decades. The film brought together a fantastic cast, a great soundtrack, clever one-liners, and asked a number of tough questions on the nature of its genre.

The chief problem of Seven Psychopaths, without giving away too much, is that virtually every convention it supposedly “sends-up,” it ardently adheres to. For example, around halfway through the film, Christopher Walken comments on Franan’s script, and thus the script of the film itself, pointing out the shallow nature of every female character in the film, their complete lack of interesting dialogue, and the gruesome fates they succumb to. But the film itself never once deviates from this legitimate complaint. The films few female characters receive less development after Walken makes this remark, and not one advances from the status of plot device by films end.

The film also tries tying together a unified message on humanities’ interests in psychopaths, and the ease we wind up as psychopaths, and how to fight against it. But where good tales of ambiguity either show different sides with valid reasons incapable of reconciliation, cruel turns of chance destroying hard fought victories, or the heavy priced righteousness demands, Seven Psychopaths either gave nothing of value to the philosophical questions it asks, or had too muddled a script to discern value. This is a remarkable misstep considering the acting talent on display, and for all the film’s faults, the cast certainly doesn’t phone in their performances. This is remarkable, considering how many holes exist in the logic of each characters personality.

At the very least, Seven Psychopaths is a mostly noble artistic failure, in many ways more admirable than easy artistic success. But Seven Psychopaths can easily wait for matinées, rentals, and second opinions rather than the devotion Tarantino-esque films actually made by the adjective’s namesake often warrant. 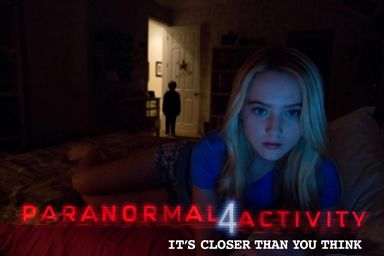 Advisory – Will cause motion sickness and narcolepsy, but enough loud noises at 15-minute intervals to prevent the mercy of coma. Inappropriate for all audiences outside Guantánamo Bay.

Paranormal Activity 4 is a found-footage horror movie with a “4” on the end starring an evil six-year-old, and in all likelihood, edited by the Ghosthunters production team. No further description of PA4 itself is necessary, or desirable, to indicate its quality. Instead, I’ll just focus on the things PA4 did so badly, any film-school entry exam should automatically take students who bring in projects displaying what PA4 displays, and toss them under the nearest moving vehicle.

1) Stop pretending your “found footage” films actually happened. No non-institutionalized American actually thinks the 80th Blair Witch knockoff in the last decade points to a ghoul epidemic ignored by our politicians. Making further “films” in this vein is tantamount to pigeon-dropping the same mall clerk until the police take you in, or the clerk finally points a gun at your head.

2) Looking “realistic” is no excuse for shoddy production. Despite the admirable use of mercifully stationary Mac-cams, PA4 still has enough shaky hand cams to send its audience into physical pain.

3) If you’re making a horror movie where no one will die for the majority of the picture, don’t just go to dead time until something comes out to scare the audience. Nobody will be any more or less scared if it takes the film three minutes or three hours to start destroying set pieces and human flesh.