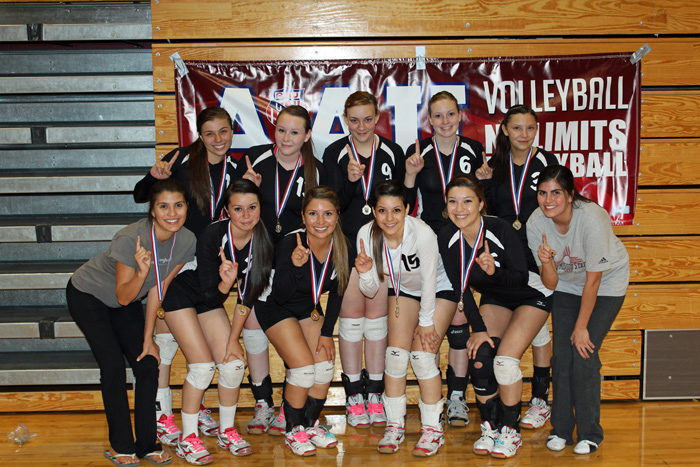 The Mile High Super Regional is the largest AAU tournament in the Rocky Mountain Region with more than 100 teams competing. Fourteen teams competed in Division 1, where the Arriba SOL team played. The team finished first in pool play with a 10-2 record and received the second seed to start bracket play.

In bracket play the team beat a solid team from the Faith Volleyball Club from Denver. Arriba SOL swept the match 21-15, 21-16. Leading the way in this game was right side hitter Christina Naranjo from Espaňola Valley High School.

In the semifinal match, Arriba SOL faced an outstanding team from Riverton, Wyo. The Riverton team was anchored by a 6’2” middle blocker who had dominated the tournament up to this point. Arriba Sol came out swinging in the first game and pushed the pace of the game and nullified the height advantage that Riverton had enjoyed all tournament.

Setter Celina Naranjo controlled the flow of the match and confused the big front line from Riverton by running an up-tempo offense from a variety of angles. Arriba Sol won the first game 21-11. The second game was a tight side-out game, but the Arriba Team never gave in and pushed a 4 point lead in the middle of the game that held up for a 21-18 win.

In the Championship, Arriba SOL faced the number one Seed 303 Volleyball Club. The 303 team was lead by a very strong right side attack that utilized two strong left-handed hitters. The 303 team had dropped only a single game all day and had dominated its competition to this point.

Arriba came out tight in the match and was down 5-2 when Elana Salazar stepped to the service line. Salazar served 15 straight points with an incredible eight aces and Kayla Romero dominated the game from her outside hitting position.

Arriba SOL won the game 21-6. In the second game, Arriba raced out to a solid six point lead at 14-8, but the team relaxed a bit and 303 came storming back to take the second  game 25-23. The third and final game was point for point, until Arielle Martinez dug a rocket from their right side hitter that gave Arriba the advantage and seemed to take the aggression out of 303. They tipped three times in a row at match point and Arriba closed out the championship 17-15.

This is the second National Qualifier that Arriba Sol has won and the girls are excited for their next challenge at the AAU National Tournament in Orlando, Fla. The team will be competing in the Club Division June 23-26.