Array Of Legislation Unveiled During First Week Of Session 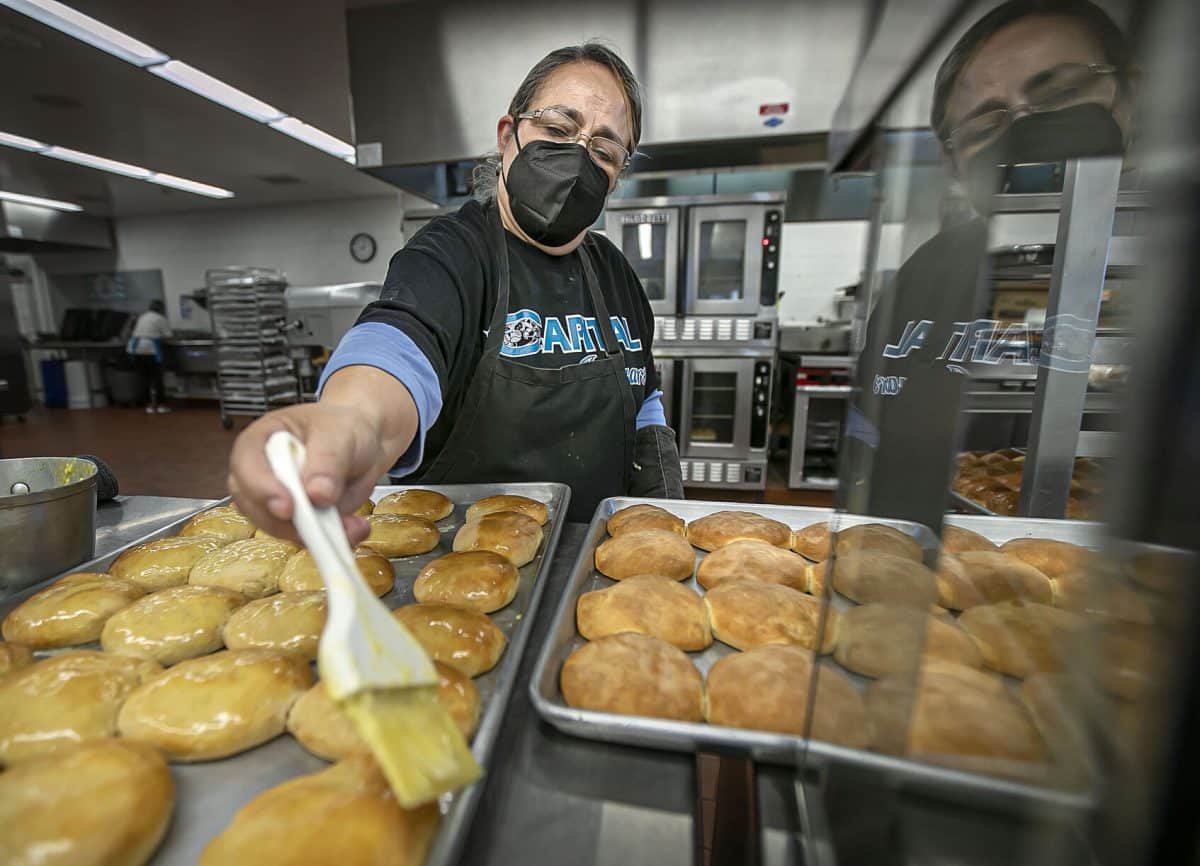 The 112 members of the New Mexico Legislature have unveiled scores of bills and other pieces of legislation they hope will cross the finish line before the end of the 60-day session.

As of Friday, 284 had found their way to the state’s legislative website.

The session started Tuesday and ends March 18. As lawmakers head into the second week of the session, here’s a look at a few of the bills and other pieces of legislation likely to generate attention — and possibly some controversy — in the Roundhouse.

New Mexico has a long list of official symbols, from a state cookie to a state cowboy song.

Could a state smell be next?

Soules has recruited a group of fifth graders from Las Cruces to serve as his expert witnesses on the bill.

Students in New Mexico would receive free breakfast and lunch at school under a bill that is a legislative priority for Gov. Michelle Lujan Grisham.

“As a former educator, I know that students with a full belly can concentrate more, focus more on academics and have better academic success,” Sen. Leo Jaramillo said, (D-Española), who is co-sponsoring the measure with Sen. Michael Padilla, (D-Albuquerque).

Jaramillo said the need to make sure students don’t go hungry is real. He said he’s heard from educators who tell of students who feel sick but don’t want the nurse to call their parents to pick them up from school because they want to have lunch.

“In most cases, that’s going to be their last meal of the day,” he said.

“I’ve heard from women like my mom, who’s a retired school cook, of students who would put drumsticks of chicken in their pocket[s] to take home for their younger siblings to have something to eat when they got home from school,” he added.

The coronavirus pandemic also highlighted the issue of food insecurity for him personally, he said.

“During the pandemic, the number of parents who reached out to me to tell me they didn’t budget to feed their children during the workweek is what really made me realize the need of school breakfast and lunch for families who don’t budget feeding their kids during the workweek.”

Speaking of Soules, the Las Cruces lawmaker is proposing to study the feasibility of constructing a high-speed passenger railroad from New Mexico’s southern border to its northern border.

The study would examine not only the cost but the return of investment and how it would shape the state’s economy.

“New Mexico, through accident of geography, we sit at the crossroads of a continent,” Soules said. “We are poised to be leaders in the logistics of moving things.”

Soules is also proposing a $1 billion appropriation to construct the railroad, though he knows “there is no chance” the Legislature would approve such a measure without a feasibility study first.

“With the record revenues we have now, we have the opportunity to look up and out to what we could be, and this will be a piece of looking up and out with very bold ideas about transforming our state,” he said.

Soules said he at least hopes to bring attention to the possibility of high-speed rail.

“The feasibility study might say that this is a harebrained idea and Soules needs to go off to the loony farm — I don’t know,” he said. “But if it comes back that this is worthwhile, that this gets attention of people like national Secretary of Transportation [Pete] Buttigieg to start conversations about putting in high-speed rail around the United States, and here’s a state that’s already talking about it and looking into it. … If we don’t do a study and look at it, then we never know whether we’re missing out on a different future for the state based around high-speed train.”

State senators and representatives would be subject to term limits under a constitutional amendment Sen. Craig Brandt, (R-Rio Rancho), hopes to put before New Mexico voters.

“I’m trying to be careful about what I’ve seen in other states that have done term limits where if the term limit is too short; the bureaucrats end up running everything and not the elected officials, so I was trying to figure out how to strike that balance,” Brandt said.

Without term limits, incumbents will always have an advantage in elections, he said, adding term limits would also allow for fresh ideas and what he called “more representation closer to the people.”

“I think the longer you’re up there, the more you really get stuck in a system and don’t think as much about the people you represent,” he said. “You start taking them for granted, taking for granted that you’re going to get reelected.”

Brandt said he proposed longer terms for state representatives to allow them to focus on improving New Mexico, not getting reelected.

“I think it will make for better legislators and better governance if they’re not having to run constantly because they really don’t ever get a break from campaigning,” he said, adding senators tend to be “a little more deliberative” and “not run quite as many statement bills … that we know aren’t going anywhere, but we’re just trying to make a statement so we can use it in a campaign.”

Brandt said he doesn’t know whether his proposal will go anywhere, but he’s considering including a salary amid a push to pay lawmakers as part of a larger effort to modernize the Legislature. He said he won’t support a salary for legislators unless term limits are part of the package.

“You look at the U.S. Congress and the U.S. Senate not having term limits, you’ve got people that have been sitting up there like Mitch MoConnell for 100 years,” he said. “They become professionals. You’re making that your profession, where being a politician becomes your profession.”

Fix the sidewalk, will ya?

People don’t like potholes in streets, weeds on the traffic islands or cracks in the sidewalk. Rep. Miguel P. García, (D-Albuquerque), wants local governments to start taking charge of sidewalk repairs and upkeep.

Currently, it is the responsibility of the nearest homeowner or business to pay to repair sidewalks lining their property. García’s House Bill 24 requires governing bodies of a county or municipality that determine it is necessary to repair or improve a sidewalk “fronting an individual tract or parcel of land” to cover the expense and notify the homeowner or business of their intent to fix things up. The bill has been referred to the House Government, Elections and Indian Affairs Committee for its first hearing. As of Friday, the legislation had not been placed on the committee’s agenda.

In an interview, Garcìa said his constituents are facing a “rude awakening that sidewalks, that are basically public property of the city or county” are their responsibility to care for. He said his district includes low-income neighborhoods where residents don’t have the funds — often ranging from $500 to $3,000, by his estimate — to pay for repairs.

He said in some cases sidewalks are so bad pedestrians can’t navigate these sidewalks with walkers, baby carriages or mobile chairs and have to move into the street, which is “a hazard itself.”

Two House Democrats are sponsoring a bill to do away with any cost women may have to pay to receive breast examinations.

“It’s important for women to have access to all of the diagnostic exams they need to make sure we are not allowing breast cancer to get more advanced before we treat it,” Thomson, a breast cancer survivor, said in an interview.

HB 27 is scheduled to be first heard at 8 a.m. Monday in the House Health and Human Services Committee, which Thomson chairs.

Rep. John Block wants New Mexicans who cast ballots to prove who they are.

To that end, he has introduced House Bill 110, which would require voters to provide a driver’s license or Motor Vehicles Division-issued ID card to vote in-person, and either one of these or their Social Security number to vote by mail. His bill would require the MVD to provide, free of charge, xerox copies of voter identification cards so voters can mail those in with their ballots. The bill would also waive the $5 fee (for four years) or $10 fee (for 10 years) for registered voters to obtain voter identification cards.

In an interview, Block, (R-Alamogordo), said he believes HB 110 would “add just one more layer to ensure our elections are trusted and valid — and at the end of the day we know exactly what we did in that voting booth because we proved who we were when we went to vote.” He said New Mexicans need ID “to check into a hotel, to get married, to buy alcohol, to buy a pack of cigarettes” so his bill makes sense.

HB 110 has been referred to the House Government, Elections and Indian Affairs Committee. As of Friday, it had not been placed on the committee’s agenda.

Late last year, the Albuquerque Police Department asked state lawmakers for help in supporting law enforcement agencies’ efforts to catch up with filing outstanding misdemeanor and felony arrest warrants. A KRQE-TV report from late last year said there are about 5,000 active felony and more than 62,000 misdemeanor warrants in Bernalillo County alone. Police say some people with outstanding warrants may be walking around free because the backlog is so big police cannot digitally enter arrest warrant data in a timely manner.

In an interview, Lord said the number of outstanding warrants is “ridiculous.” She said the backlog ranges from three days to four months, based on a letter Albuquerque police sent to the Legislative Finance Committee.

“We have horrible crime in Albuquerque,” she said. “We need to step it up and get these people with warrants off the street.”

The bill is scheduled to be heard at 1:30 p.m. today at the House Judiciary Committee.