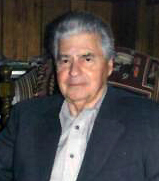 Archerd Eli Youngblood, 87, a resident of Los Alamos and formerly of Palmer Township and Hellertown, Pa., passed away Wednesday, July 31, 2013 at St. Vincent’s Hospital in Santa Fe. Archerd was born April 25, 1926, in Evansville, Ind., and was the son of the late Leland Masters Youngblood and Nina Archerd.

On Sept. 10, 2009, Archerd and his late wife Atea Greco Youngblood celebrated 60 years of marriage. After his wife passed away, he moved to Los Alamos where he met his second wife, Marjorie Orth, whom he married Sept. 24, 2011. Archerd retired from the Bethlehem Steel Company in 1983 where he worked as a forms designer and graphic artist.

He was an alumnus of the Cincinnati Art Academy and a member of the Bethlehem Palette Club and the Nazareth Paint Box Art Club. He was a well-known local artist who painted in oil on canvas. Archerd’s paintings, which capture much detail, showed in galleries throughout the Bethlehem area. His paintings won numerous awards.

Archerd was a Staff Sergeant in the U.S. Marine Corps and served in World War II and the Korean War. He was a lifetime member of Brown & Lynch American Legion Post Number 9 of Palmer Township. He was also a member of the Wesley Methodist Church of Bethlehem, Pa., from 1958–2010.

A graveside service will be held at 11 a.m. Thursday, Aug. 8, 2013 at Guaje Pines Cemetery in Los Alamos, New Mexico. The family of Archerd Eli Youngblood has entrusted their loved one to DeVargas Funeral Home & Crematory of the Española Valley.