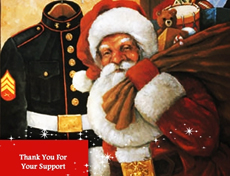 The HMS Implacable, the local chapter of The Royal Manticoran Navy will be supporting the US Marine Corps Reserve “Toys for Tots” campaign for the third straight year.

Donation boxes have been placed at the Metzger’s Hardware stores in both Los Alamos and White Rock. These will remain in the stores until Dec. 15. The community is encouraged to bring a new, unwrapped toy and drop it in a Toys for Tots box and share Christmas with a child in need.

Additionally, there are three “Fill the Truck” drives this year. The first is at the White Rock Metzger’s Hardware Store Nov. 24 for Black Friday. The second is at the Los Alamos Metzger’s Hardware Nov. 25 on Small Business Saturday. The final “Fill the Truck” event is during Winterfest Saturday, Dec. 8, culminating during the Holiday Lights Parade.

The public is encouraged to bring a new, unwrapped toy to these events and help fill the truck.

“We are hoping to meet or exceed last year’s amount, so we’re adding more events and additional donation sites to our campaign, and we’re placing a float in the twinkle light parade this year. We’re asking for those that can help out to bring donations of new, unwrapped toys to the twinkle light parade or any of our other ‘Fill the Truck’ events. For those that can’t attend one of those events, we will have drop off points throughout town between Nov. 1 and Dec. 15,”said Bill Knight, captain of the HMS Implacable. “Christmas is a time of year we all remember, and the US Marines want to make that memory a bit brighter for those in need.”

Toys for Tots is a national charity organized by the United States Marines Corps Reserve. Its goal is to deliver, through a new toy at Christmas, a message of hope to less fortunate youngsters that will assist them in becoming responsible, productive, patriotic citizens. The United States Marine Corps Reserve has been distributing toys to those in need since 1947. More information can be found at www.toysfortots.org.

The Royal Manticoran Navy (www.trmn.org) is the official Honor Harrington fan association. They celebrate the work of David Weber and the universe he has created in the Military Science Fiction genre with his Honor Harrington book series. The Association’s structure is set up based on the examples in the books and participation teaches service and leadership skills. Members of the organization advance those skills by their participation in community services and charitable events.

HMS Implacable is the “ship” that houses the local chapter of the Royal Manticoran Navy and is based in Los Alamos. The crew includes personnel from Los Amos, Santa Fe, Espanola, Chimayo, Peralta and Montezuma.  In addition to their annual Toys for Tots program, the HMS Implacable’s crew also cleans the grounds and places Christmas wreaths at the Santa Fe National Cemetery, participates in the Big Brothers and Big Sisters “Bowl for Kid’s Sake” campaign and works with the Habitat for Humanity program.

For more information about the Royal Manticoran Navy or HMS Implacable, contact Bill Knight at co@hmsimplacable.trmn.org.