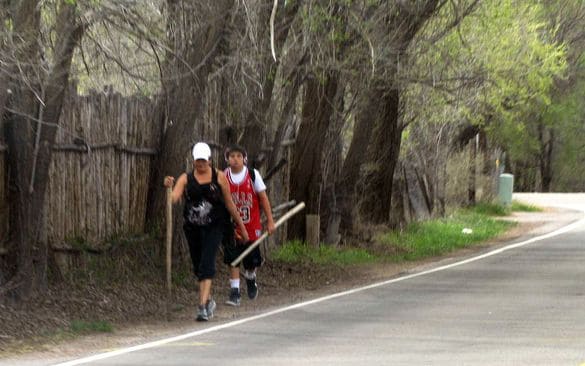 A mother walks with her son along the highway to Chimayó Thursday. Photo by Carol A. Clark/ladailypost.com

Pilgrims making their way to El Santuario de Chimayó were seen Thursday and Friday along the highway to the tiny shrine in Chimayó. They walk from short distances to 100 miles or more during Holy Week leading up the Easter Sunday.

Some carry wooden crosses. According to the Santuario de Chimayó website, tens of thousands of worshipers pass through the doors of the little chapel, built almost 200 years ago on a site that is sacred to many Pueblo Indians and descendants of Spanish settlers.

Somewhere around 1810, a Chimayó friar was performing penances when he saw a light bursting from a hillside. Digging, he found a crucifix, quickly dubbed the miraculous crucifix of Our Lord of Esquipulas.

A local priest brought the crucifix to Santa Cruz, but three times it disappeared and was later found back in its hole. By the third time, everyone understood that El Senor de Esquipulas wanted to remain in Chimayó, and so a small chapel was built on the site. Then the miraculous healings began. These grew so numerous that the chapel had to be replaced by the larger, current Chimayó Shrine – an adobe mission – in 1816.

Believed to be built on sacred earth with miraculous healing powers, the legendary shrine El Santuario de Chimayó, is probably the most visited church in New Mexico.

The crucifix which began the original shrine still resides on the chapel alter, but for some reason its curative powers have been overshadowed by El Posito, the “sacred sand pit” from which it sprang. Each year during Holy Week thousands of people make a pilgrimage to Chimayó to visit the Santuario and take away a bit of the sacred dirt. Pilgrims walk a few yards or 100 miles. Many claim to have been cured there of diseases, infirmities and unhappiness.

The walls of the sacristy are hung with discarded crutches and before-and-after photographs as evidence of the miraculous healings. 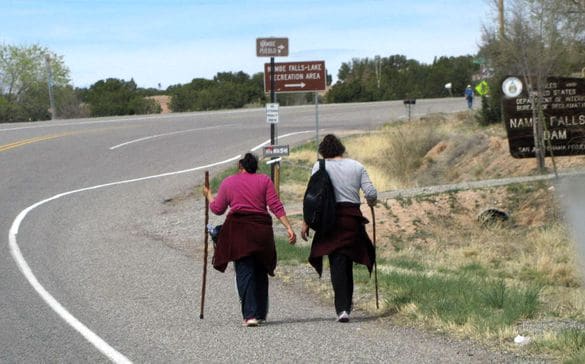 Pilgrams walk along the highway to Chimayó Thursday. Photo by Carol A. Clark/ladailypost.com