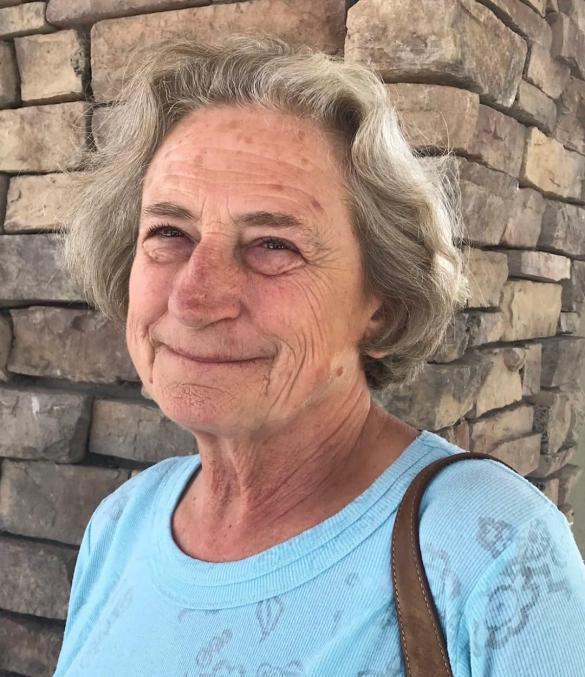 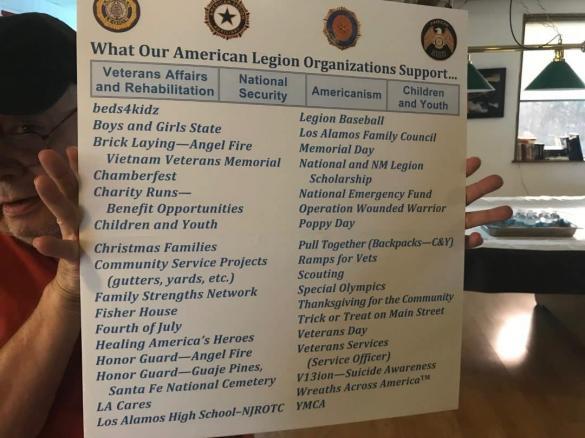 American Legion member Leland Lehman holds a sign with a list of the charities supported by the local Post, which has raised more than $7,000 so far this year for local and national entities. Photo by Maire O’Neill/ladailypost.com
By MAIRE O’NEILL
Los Alamos Daily Post
maire@ladailypost.com

Linda Fox is the commander of American Legion Frank G. Frainier Post 90 in Los Alamos and although she only got involved three years ago, she is a familiar face at every veterans’  event.

How did she get so involved so quickly? Fox said a friend invited her to check out the Legion and she found that being a member gave her a chance to “pay back” in some way. While serving in the U.S. Army Reserves at Fort Douglas in Salt Lake City, Utah, Fox flew every other month to either Boise, Idaho or Santa Fe to work with Reserves detachments. Then finally, during her active duty she moved to New Mexico and worked at the USAR school in Santa Fe fulltime.

“I stayed there until my knee finally blew out. I had actually taken my 195-hour pre-commission course. I was going to go ahead and get my commission but never ended up doing that, I was a non-commissioned officer,” Fox said.

Part of paying back for Fox is participating in honor guards at the National Cemetery in Santa Fe along with others from the local Post including Randy Moore, Marshall Madden, Warren Mazanec, Doug Fox and her son, John Fox.

“This year so far there’s been 190 that we’ve done. Some days there’s three or four a day and some weeks we may not have any. My son and I are there 90 percent of the time except during the school year when he has to work. We do the flag line, the bugle, the firing guard, and present the shells to the family,” she said. “There’ve been times when I’ve even been the family when there’s no family. So I go in there and sit there and usually one of the branches of the military is there to do the flag and they hand the flag to me on behalf of the family.”

Fox said it’s very hard but it’s an opportunity to say thank you.

“There are times when there might be just a brother. We all will go in and sit with them because nobody should be alone but especially that veteran should have somebody there. And then we do the ceremonies for unclaimed deceased veterans twice a year. They are escorted from Albuquerque and there’s a whole flag line and there are probably 100 of us that show up to do everything along with the military to have a special ceremony for them. That should never happen,” she said.

Fox said she also lays wreaths at the Vietnam Veterans Memorial and that last year she got to read the citations for one of the Medal of Honor winners, which was very emotional and difficult.

For the American Legion, giving to the community is a very important part of giving back. She mentioned that at any given time, the Post is raising money for a variety of causes in the community. Right now one of the bartenders, Jaime Clabo, is conducting a “back packs for students campaign” and people can drop off backpacks and or school supplies at the American Legion.
A regular fundraiser is the American Legion Breakfast held 8-11 a.m. on the third Sunday of each month – a different Sunday to the Posse Lodge breakfasts.

Local Legionnaires are from every branch of the armed forces. Rick Haskins served in the Marine Corps from 1975 to 1979 and then in the Army from 1980 to 1984. He said the Post is a good place to come to and chuckled as he said it is like a “soap opera”.

Jim Mariner served with the U.S. Army Medical Corps from 1974 to 1977. These days he said he enjoys helping with the community, state and nation particularly with veterans, children and youth.

“Americanism is basically our four pillars in the American Legion. We’re coming up on our 100th anniversary celebration next year so we’re planning for that,” he said.

Mariner particularly enjoys going over history here in Los Alamos, looking at archives of newspapers and “finding out things that most people don’t know”.

“I find the history very interesting and informative and hopefully we learn from our past for our present and our future,” he said.

Marshall Madden is third generation military and spent 12 years in a military school. He said he basically came to the Legion to support the veterans.

“I’m a quasi-resident, going back and forth between Austin, Texas and here. I try to help when I get up here to support veterans,” he said.

He just finished participating in “Run for the Wall”, traveling 6,534 miles in 10-days on a mission ending at the Vietnam Veterans Memorial Wall in Washington, D.C. He said bikers taking part in the Run are welcome into every town they stop in with an atmosphere almost like a Fourth of July parade. The veterans visit veterans’ hospitals and memorials along the way.

Danne De Backer is a Vietnam Veteran who enjoys being at the Post.

“I’m a Navy guy. What brings me here is the camaraderie,” he said. “I like these people – they are people of like mind. We’re mostly philosophically on the same channel. We love our country. It’s a good social place, which is why I come here.”

Other veterans chimed in that De Backer also sings and is the craftsman who made the bar top at the Post.

“I’m the local colorful character,” De Backer said. He said he joined the Legion at Leland Lehman’s invitation and liked it so much h became a lifetime member.

John Fox, Commander of the Sons of the American Legion, said he is there to help out because he knows everything has to start with vets who are involved in the positive community building.

“Patriotism, community involvement and outreach is so important,” he said.

He was on the front line of the YMCA parade carrying the flags and also does the bugling at local events.

Lehmann said he is a lifelong resident of Los Alamos who volunteered for the draft in the Vietnam War and spent 1968 in Vietnam as an infantryman.

“I came back with a sour taste. It took a lot to join the Legion but I finally did 27 years ago. I did it because of the camaraderie and community spirit. Just the idea that a vet could still keep being a vet,” he said.

Lehman is a past commander and has served in other positions at several different levels, including chaplain. In fact he says the only position he has never held is historian.

He currently holds the position of gaming accountant for the Legion’s state-sanctioned gaming operation, which is what powers its donations to charities. Already the Legion has raised some $7,000  – the money that goes out to entities in the community, state and nation.

Gregg Geisler said he is different to all the rest because he had 92 days of active duty and the minimum to join the Legion is 90 days.

“From September through December 1971 I attended U.S. Army Ordnance Officer School. That was my active duty,” he said.

He said he comes to the Post because of the donations the Legion gives to charity and the work they do around the community in support of veterans.

Geisler also is commander of the local chapter of the Military Order of World Wars.
Air Force veteran Ed McDaris, past commander and past president of the Legion Riders group says the camaraderie at the Post is the big draw for him

“We all have something in common. We do some good deeds for the community and nationwide with our donations. I don’t think the regular community realizes the impact that we have,” he said. “In many events we are partners with the VFW. We take turns doing Memorial Day and Veterans Day joined by the Knights of Columbus.”

Navy veteran Warren Mazanec said he moved to Los Alamos after his medical retirement last year and was invited by Fox to the Legion. He said he enjoys the friendship and camaraderie of the Post.

“I lost seven people I served with to suicide in the last year and if it wasn’t for the Legion, it would have been a very different year for me,” he said.

He said the work the Legion does for suicide prevention for veterans is very important. Mazanec currently serves as the resource officer for the Post, assisting veterans with finding resources and obtaining their benefits.

Twenty-eight year Navy veteran Dan Mack’s first involvement with the Legion was when he attended Boy’s State as a high school junior in Drexel Hill, Penn. When he retired in 2010 he became involved again.

He encouraged any veteran who does not belong to a veteran’s organization to check out the Post, adding that the support that was there during active duty is still there and that members can get involved as little or as much as they would like.

The American Legion Post is at 1325 Trinity Dr. The next breakfast is slated for 8-11 a.m. Sunday. 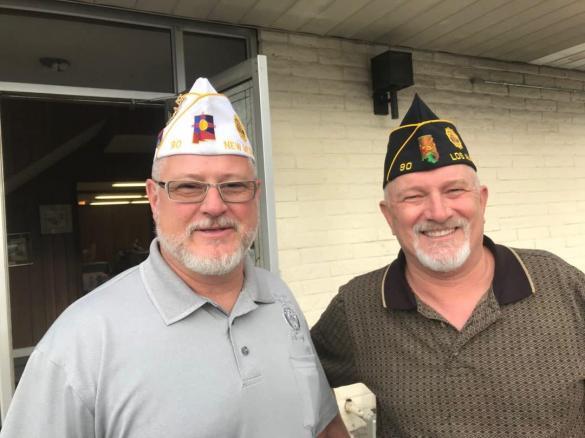 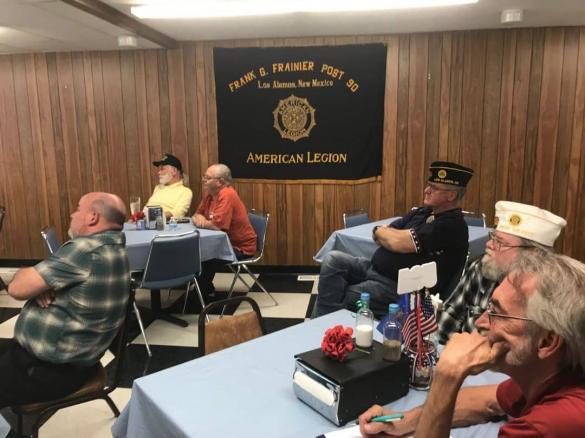 Post members gather for a presentation during a recent meeting. Photo by Maire O’Neill/ladailypost.com 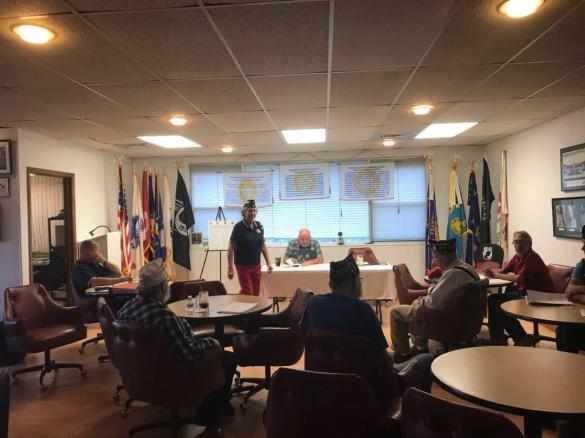