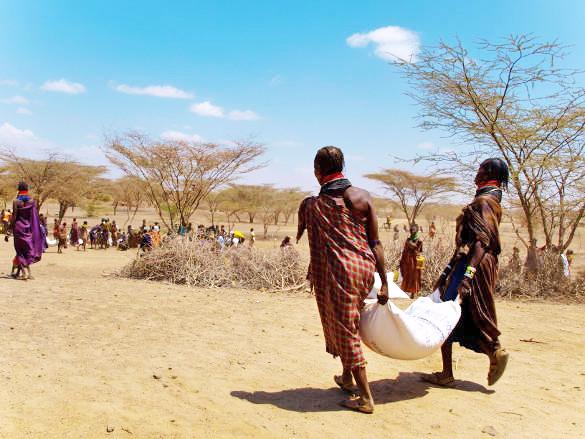 Oxfam delivers food aid to Turkana, Kenya during an ongoing food crisis fueled by drought. This year, below-average rains caused crop production to fall nearly 50 percent. Courtesy/Irina Fuhrmann/Oxfam under Creative Commons 2
AGU News:
Deaths due to famine have fallen precipitously in recent decades, but undernutrition, which affects one in five children worldwide, remains rampant. Now, researchers are using satellite imagery and social media to detect food-scarce regions before they become full-blown crises.
Molly Brown of the University of Maryland conducts research for Modeling Early Risk Indicators to Anticipate Malnutrition (MERIAM), a coalition of researchers trying to develop an early warning system for food crises. Brown’s most recent work, an aggregation of data from 77 papers, found floods and droughts were among the strongest risk factor for childhood undernutrition, while having an educated mother and high water quality reduce a child’s risk.
Most of the studies looked at childhood stunting — low height due to chronic undernutrition. But Brown is more interested in the predictors of wasting, defined as low weight for a child’s height. “Stunting is a permanent condition,” said Brown, who presented the work earlier this month at AGU’s Fall Meeting in San Francisco. “It’s very hard to reverse when you’re six or seven and you’re really short. You can’t just catch up. Whereas wasting is totally reversible.” Reversing the effects of wasting, she says, can prevent the severe, permanent effects of stunting.
Among the strongest predictors of wasting were climate shocks like floods, droughts, and heat waves. That was no surprise to Brown — in her earlier work, she detected croplands affected by drought with satellite imagery. Seeing food shortages from space helps agencies better direct food aid.
But climate isn’t the only thing driving food crises. Conflict’s effect on undernutrition is just beginning to be studied. Of the 77 studies included in Brown’s analysis, only seven looked at the effect of conflict. “All the famines in the last 10 years have been in places like Somalia, which has Boko Haram, and Nigeria,” Brown said. “You have all of these crises which are not just climate, but climate plus political conflict or violence.”
“Social unrest has huge implications on a number of sectors of agriculture,” said Greg Husak, a University of California, Santa Barbara researcher who works with the Famine Early Warning System Network to alert governments and aid agencies of impending crises. “It may be out there that a farmer can’t go on the field to plant because it’s not safe to be outside. It may be that infrastructure to move resources, like seeds or fertilizer, are disrupted.”
But conflict, unlike drought, can’t be seen from space. “We can anticipate where there may be a water shortage, which may lead to a food production shortage, and there’s some reliability with those forecasts,” Husak said. “It’s much more difficult to say, well, in three months, we expect that this elected official is going to die and social pressures are going to explode. Those are difficult systems to forecast and anticipate. I think while they’re while they’re difficult to anticipate, there are ways to monitor them.”
That monitoring involves computer algorithms that scan news sites and social media. Articles and posts that mention violence are compiled into databases and maps that estimate where conflict may be occuring. That can clue agencies in to areas that may be vulnerable to food crises.
What needs further study, Brown says, is the way conflict interacts with environmental issues to create food insecurity. “We found a few papers that included conflict, but they didn’t include climate,” she said.
Husak agrees that climate and conflict work in tandem to create crisis. “Lots of times what we see is that conflict comes in parallel to droughts and climate events,” Husak said. The famine in Syria is a prime example of how conflict and environmental stress can compound each other, he added. “There was building unrest, and then there was a drought, and then an explosion in social disruption.”
Brown hopes her future work will enable a better understanding of conflict’s role in food crises. “I think it’s going to take another decade of work. It’s a long long project.”