The Acorn woodpecker has a white ring around its eye and also is among the most commonly seen. Photo by Bob Walker 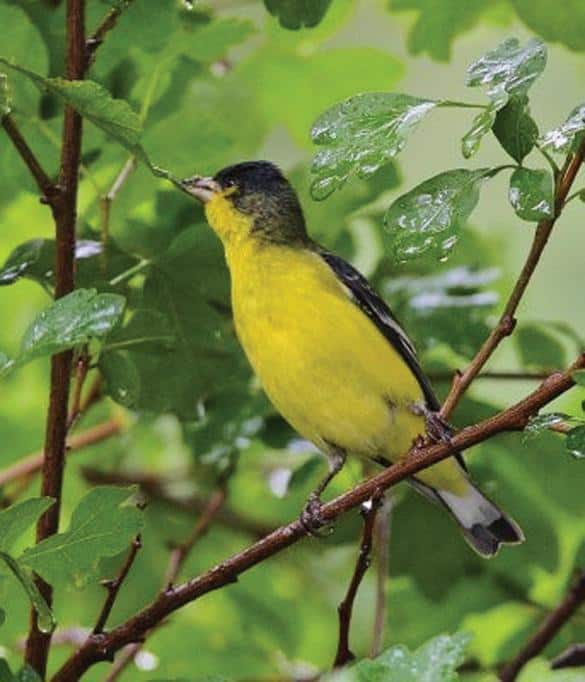 The Lesser goldfinch is the most commonly seen species in the lower forest habitat.
Photo by Bob Walker

We previously considered bird species that are generalists for breeding throughout the various habitats in Los Alamos County. The annual counts give the impression that these species as a group have been increasing in number over the years.

However there is one dominant species, the Evening grosbeak, which is increasing in numbers. The other less common species are becoming even less common.

We also have considered the bird species that breed primarily in the juniper/pinon habitat in the lower elevation toward the Rio Grande. Unlike the generalists, this group appears to be remaining about the same in numbers from year to year.

However there also is one dominant species, the House Finch. It is increasing in numbers but this increase is offset by the decrease in numbers for the other species. The overall pattern for these two habitats is that the most common species are becoming more common while the less common are decreasing.

CHART A shows that very few or no species were seen prior to 1995. Similar to the bird species in the other two habitats, an irruption in numbers occurred in the late 1990’s. The count then increased to 60 in 1997.  A precipitous decline occurred thereafter. The annual number has increased again since 2013 to be 40 to 60 birds seen annually. 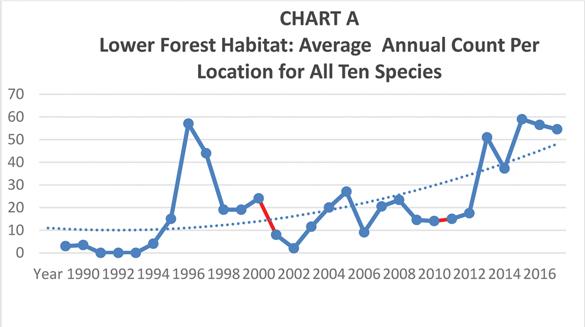 CHART B shows that the three most common species are the major influence for the pattern shown in CHART A. Chart B also shows a contrasting pattern to CHART C.

The forest fires and droughts together may explain the annual trends for the two groups of species but in opposite ways. The three most common species have a distinct period of decline from 2000 to 2012. Twenty or fewer are seen each year during this period.  Four severe droughts also occur during this period. The loss of ponderosa pine forest and other plant life may have caused the decline.

This occurs midway between the two forest fires and during the period of droughts. The most common species have again increased in numbers in recent years while the least common species in turn have declined.

Chart D shows that the Lesser goldfinch was not seen in the lower forest habitat from 1989 to 2001. It then becomes the most commonly seen species as its annual count increases dramatically after 2012. It is the one species in which the impact of forest fire, drought and competition among species may be working in its favor.