Amateur Naturalist: What Is Happening To The birds? 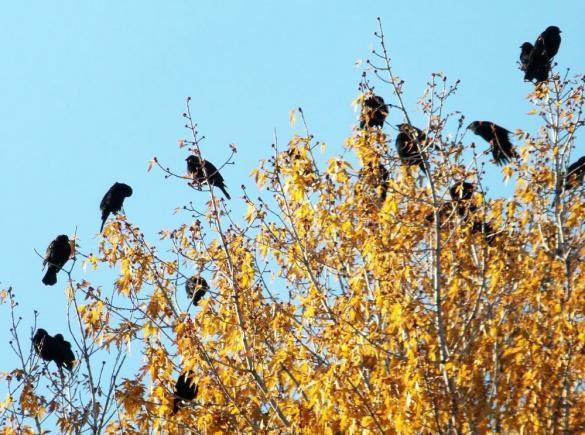 Redwing blackbirds gather at the top of tree in the autumn. Photo by Robert Dryja 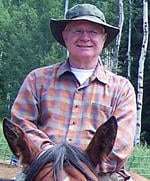 The transition for fall to winter is a good time to consider what is happening to birds from a variety of viewpoints. The seasonal movement of various bird species is closing. Redwing blackbirds have been appearing in groups of 20 to 50 in trees. They suddenly fly as a group from one tree to another, making a constant raucous. White-winged have been in small groups of about five to eight birds that walk quietly about on the ground. Broad-tailed hummingbirds flew away when autumn started to arrive.

Annual migrations are one type of movement for birds. However there also are longer-term movements. Draught for several years has resulted in pinyon pine dying out. Juniper is more drought tolerant and is replacing the pinyon pine. Birds that favor pinyon pine seeds for food have decreased in numbers. The Cerro Grande and Las Conchas forest fires in 2000 and 2011 have greatly reduced the conifer and pine forest on western and southern sides of Los Alamos County. Birds species that favor forests of tall trees for their habitat will be waiting decades for these trees to regrow. On the other hand, faster and low-growing aspen and Gabel oak trees are replacing the burnt tall trees. They are providing a favorable habitat for other bird species. 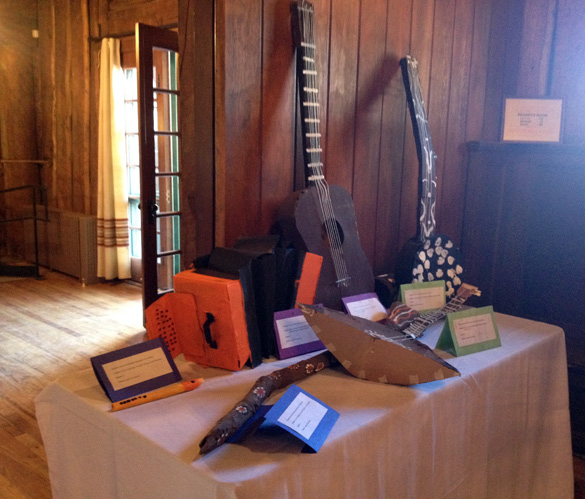 Butterflies provide another indication of change. Butterfly species that were found only at lower and warmer areas now are being found at higher elevations. They are providing a more tangible indicator that the weather and/or climate is changing to be warmer. Birds quickly fly back and forth for greater distances compared to butterflies. Some lower elevation bird species may begin to appear more regularly at higher elevations along with the butterflies.

Seasons, drought, forest fires, and climate change all interact in complex ways to affect what happens to birds. The landscape of Los Alamos County adds another level of complexity. The landscape changes in elevation from about 5,800 feet at the Rio Grande to 10,400 feet at the Pajarito mountain rim by the Valles Caldera. This is an elevation gain of nearly a mile and occurs over a horizontal distance of fifteen miles. The landscape additionally is divided into mesa tops by six major canyons. The distances from mesa tops to canyon bottoms range from 250 to 400 feet.

The amount of rain and snow fall increases with elevation. Canyons toward the Rio Grande can be described as having high desert landscapes. The same canyons may be covered with forest toward their upper ends in the mountain tops, thanks to the additional rain.

The combined result is that bird habitats can change in short distances and in short time periods. What may be favored habitat for one year may change in future years.  Still, there is a long-term trend residing in all these variables. To use a metaphor, how can the forest be distinguished from the trees?

One way to identify trends is to collect observations from year to year and then analyze the data. Chart 1 is an example of what can be done with collected data. It shows the number of American Crows reported on a “viewing year” basis for 27 years. (“Viewing year” refers to the winter/spring months of a year when data was reported, not the complete year.)

Chart 1 also shows that the number of birds has increased for the past seven years. Only 13 birds were reported in 2010 compared to 196 birds for 2017. Are the drought conditions of recent years also creating more favorable habitat in the long term, complimenting the impact of the forest fires? 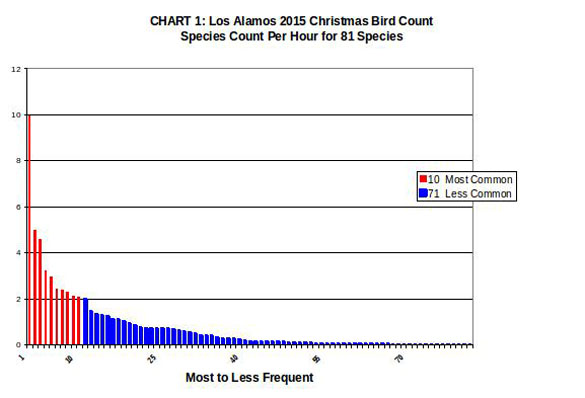 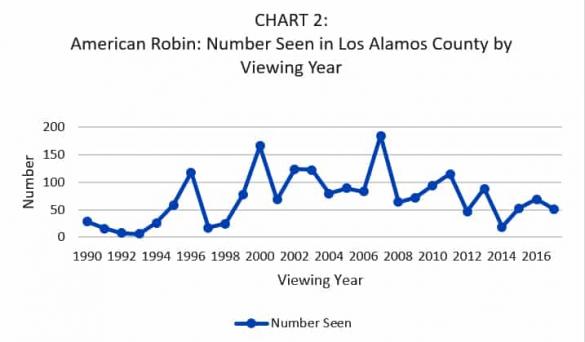 “Ebird” in contrast provides a way to report on birds seen at multiple locations. The web address for Ebird is: https://ebird.org/home. Ebird also provides Information about New Mexico and Los Alamos County at: https://ebird.org/region/US-NM?yr=all&m=&rank=mrec. The Pajarito Environmental Education Center at the Los Alamos Nature Center also has a birding program. Its web address is: https://peecnature.org/birding/.

We will explore what is happening with habitats and bird species in coming columns.