Aluminum Collection Has Proven Worth 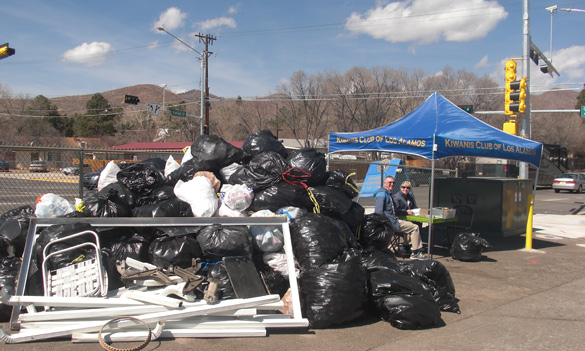 Bob Carlos and Emily McGay of the Kiwanis Aluminum Collection Committee survey a mountain of bagged aluminum and other metals taken in during a can collection day in the Sullivan Field parking lot. The next collection date will be 9 a.m. to 1 p.m.  Saturday, Jan. 16. Kiwanis pays for the metal it takes in, then resells it to a Santa Fe firm at a slightly higher price, pays the necessary bills, and uses the remainder of the income to support Kiwanis community projects.Courtesy/ Morrie Pongratz
By CHARMIAN SCHALLER
Kiwanis Club of Los Alamos

It’s been going on for many years: Every few weeks, the big, 4×4 signs go up; Kiwanis sets up a tent on the Sullivan Field Parking Lot; and, for a few hours, the club buys aluminum from a line of dedicated public supporters.

Bob Carlos, the current Kiwanis Aluminum Collection chairman, says the records entrusted to him go back to the 1990s, but he knows that the collection effort existed for some time before that.

Somewhat later, Steve Stoddard, former state senator from Los Alamos, was a constant volunteer. He usually served as cashier for the operation. He loved to be there because “he got to see people,” Carlos said, and, “He knew half the people who came and half the parents of the rest.”

Carlos himself has been helping with the effort since about 2003, and he estimates that during that time, Kiwanis has taken in 31.6 tons of metal, nearly all aluminum. He noted in a recent interview, “We do accept copper and lead and brass in addition,” but aluminum dominates collections.

Why does Kiwanis carry out these collections, especially since the county takes in metal as part of its own recycling effort?

Carlos explained that Kiwanis pays for the metal that people bring in, while the county does not. This fact encourages people to make the effort to bring their metal to Sullivan Field, and Kiwanis then sells the metal for a somewhat higher price, pays its own costs, and uses the rest for the club’s public service projects.

On an average collection day, Carlos said, he and about six volunteers do all of the work. Usually, all of those helping are Kiwanis members, but sometimes there are others—frequently spouses.

Carlos values the volunteers greatly. He is always interested in recruiting a few more—especially people willing to substitute for him on the occasional collection days when he is out of town.

He also values those who donate, and, he noted, although many individuals are involved, there are also several good-sized organizations—clubs, churches, etc.—that participate. He would love to have more of them join the effort.

Want to help? Come donate on Jan. 16, and see what the drive is like. Come back to help in March if you enjoy the action. A second visit would also give you a chance to meet Carlos. He’ll be out of town in January. However, Kiwanis is usually good for a substitute. This time it will be Immediate Past President Steve Boerigter. Come and get acquainted—and help Kiwanis serve the community.