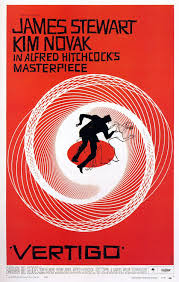 Who am I to review Alfred Hitchcock’s “Vertigo” (1958)? The film has been reviewed, admired, and just plain loved scores of times. James Stewart’s incredible. Kim Novak is creepily fabulous. Barbara Bel Geddes is the most gorgeous buddy a guy could ask for, and quirky enough to guarantee, according to 1950s movie logic, that he won’t fall in love with her. And best of all is the script, so witty, sharp, cunning, insightful, complicated, original and even — yes — thrilling.

It’s a fine film, easily the best of the “Five Lost Hitchcocks,” possibly one of the best films flat out, and everyone should see it, or see it again, this week on the big screen at Mesa Public Library.

According to the taglines, this is “a Hitchcock thriller. You should see it from the beginning!” and Hitchcock “engulfs you in a whirlpool of terror and tension” and, my favorite, the movie is “a tall story about a pushover.” If that doesn’t arouse your movie-butter popcorn cravings, you must be unconscious.

Stewart plays ex-detective John “Scottie” Ferguson, who, after some bad luck during a chase, retires from the police force with a severe case of acrophobia. A man who used to run along rooftops to catch the bad guys, he now gets sick just standing on a step ladder. Of course, he still can’t resist a mystery, so when an old acquaintance asks him to tail his glamorous wife Madeline (Novak), he does it.

What’s the big mystery? Well, no one thinks Madeline is cheating; rather, she might be possessed by a suicidal ghost.

“Vertigo” screens at 6:30 p.m. Thursday in the upstairs meeting room theater at Mesa Public Library as part of the Free Film Series. The free series presents a movie the first Thursday of nearly every month, thanks to the Friends of Los Alamos County Libraries.