To employees regarding injuries at LANSCE

This is an informational memorandum from the Los Alamos National Laboratory Communications and Public Affairs Office:

On Sunday (May 3), during preventive maintenance operations at the Los Alamos Neutron Science Center (LANSCE), a Laboratory employee was burned while working at an electrical substation. The employee was transported offsite for medical treatment and is listed in critical condition.

Eight other employees were also transported to Los Alamos Medical Center in connection with the accident; seven of those employees were later released, and one employee remains at LAMC for observation.

The cause of the accident is under investigation.

Due to ongoing activities to ensure the continuing safety of the workforce and facilities, numerous areas at LANSCE are without power and will remain without power until further notice.

Employees who normally work at LANSCE in areas affected by the power outage should, if possible, find opportunities to catch up on training or perform other beneficial work at home, at LANSCE buildings that have power, or at public locations such as the J. Robert Oppenheimer Study Center.

All affected employees should contact their supervisors to communicate what their plans are during the power outage.

The Communications and Public Affairs Office will provide further updates as they become available. 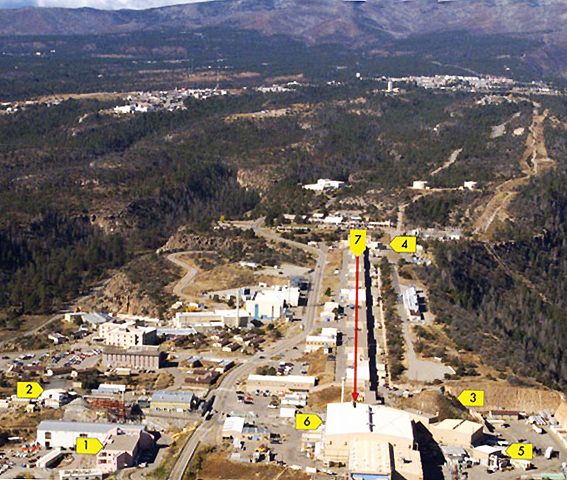 Aerial view of LANSCE, looking east to west. Additional facilities at Los Alamos National Laboratory are visible to the west.

There is an article in the February 2012 edition of National Security Science magazine titled LANSCE: Mission-Critical for National Security. The article states that the Los Alamos Neutron Science Center (LANSCE) is a premier accelerator-based, multidisciplinary research facility providing the scientific community with intense proton and neutron sources for both civilian and national security research.

It remains at the forefront of national security work because its very intense proton beam and delivery modes can be tailored to meet changing scientific and programmatic needs.

LANSCE is a mission-critical facility for the National Nuclear Security Administration (NNSA) and the Department of Energy (DOE). In 2011, the NNSA renewed the memorandum of understanding that affirms the governance and the importance of LANSCE to the weapons program and other national security science missions.

The LANSCE accelerator is a half-mile-long, 800-megaelectronvolt (800 MeV), high-intensity linear accelerator (linac) that accelerates a pulsed beam of protons to 84 percent of the speed of light. These hurtling proton pulses can be customized and delivered simultaneously to five unique research facilities: Weapons Neutron Research (WNR), the Lujan Neutron Scattering Center (Lujan Center), Proton Radiography (pRad), Ultracold Neutrons, and the Isotope Production Facility. A sixth facility, the Materials Test Station, is being developed.

The linac’s proton beam i the source of neutrons, which are generated through a process called spallation. The accelerated protons are aimed at a tungsten metal target. When the protons smash into the neutron-rich nuclei of the tungsten’s atoms, the impact shatters (spalls) the nuclei, releasing copious neutrons. The neutrons are used in a wide range of applications. Because they are neutral in charge, they can pass through materials, revealing their properties, structures, and functions in ways protons (with a positive charge) and electrons (with a negative charge) cannot. Researchers at LANSCE use neutrons to study biological as well as nonbiological materials.

Because neutrons not only split (fission) the atom but also are released when the atom splits, they are the drivers of the fission chain reaction in both nuclear reactors and nuclear weapons. The blizzard of neutrons inside these devices causes nuclear transformations of everything it strikes, transmuting one element into another and creating radioactive isotopes seen nowhere else.

It turns out that the energy range of neutrons available at LANSCE, coupled with LANSCE’s unique experimental capabilities, is ideal for studying the effects of this nuclear alchemy on materials used to build and fuel nuclear reactors. Neutrons are also ideal for studying the nuclear and materials physics that determines nuclear weapon performance.

In fact, neutrons are an essential tool for refining our understanding of nuclear weapons, from the nuclear reactions that produce the energy to the analysis of weapons debris that determines the nuclear yield. Thus, the LANSCE neutrons are especially important while there is a moratorium on all nuclear weapons tests that involve nuclear detonation. LANSCE scientists are also using those neutrons to explore fundamental nuclear physics and reveal information, for example, about the origins of the universe.

Accelerated protons are important in and of themselves. At LANSCE they are used, for example, in proton radiography, a technique invented at Los Alamos and further refined in collaboration with other national laboratories. Proton radiography provides high-resolution, high-speed, multisnapshot imaging of hydrodynamic (liquid-like) properties and processes in materials under extreme stresses (like imploding devices). Proton radiography is also important for imaging high-explosive detonation, a process that must be more precisely characterized to better predict the button-to-boom processes—from high-explosive detonation to nuclear yield. (See sidebar “LANSCE: Button-to-Boom.”) Research at pRad is crucial to the Stockpile Stewardship Program.

LANSCE’s linac and research facilities are vital to the continued success of the Laboratory’s national security science mission and the NNSA’s weapons programs. LANSCE conducts research on, for example, materials under extreme temperatures and pressures, the probability that a nuclear reaction will occur under certain circumstances (called nuclear cross sections), and on the high explosives used to initiate weapons detonations. LANSCE is the only linac-based U.S. facility equipped to conduct classified research on stockpile materials and components. LANSCE supports all NNSA laboratories and the United Kingdom’s Atomic Weapons Establishment in meeting their nuclear weapons science missions.

LANSCE has three DOE-designated National User Facilities: WNR, the Lujan Center, and pRad. These facilities are available to researchers from U.S. universities, industry, and other government laboratories, as well as to scientists from around the world. This large and active user program makes LANSCE one of the Laboratory’s most important portals to the academic community. LANSCE attracts and retains many of the Laboratory’s brightest early-career scientists.

Los Alamos National Laboratory considers LANSCE its “signature” science facility. DOE designates LANSCE a world-class facility because of the accelerator’s record of reliable operation: scheduled beam time was delivered an average of 88 percent of the time in 2011.

So that it can continue to operate reliably and to its original specifications, under the auspices of the NNSA, LANSCE is currently undergoing a substantial reboot. Key accelerator and infrastructure components are being upgraded, redesigned, and replaced.