Ahead of Super Bowl 50, Udall And Others Lead Bill To Protect Young Athletes From Concussions 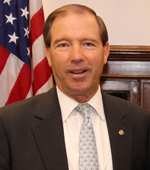 U.S. Sen. Tom Udall
From Sen. Tom Udall’s Office:
WASHINGTON, D.C. – Today, U.S. Senators Tom Udall (D-N.M.), Amy Klobuchar (D-Minn.), Richard Blumenthal (D-Conn.) and U.S. Representatives Bill Pascrell (D-N.J.) and Tom Rooney (R-Fla.) introduced bipartisan legislation aimed at protecting young athletes from the dangers of sports-related traumatic brain injuries.
The Youth Sports Concussion Act would help ensure that safety standards for sports equipment, including football helmets, are based on the latest science and curb false advertising claims made by manufacturers to increase protective sports gear sales.
Their announcement comes just before Super Bowl 50, as doctors, players, researchers and others are talking about the need to protect players — especially young athletes — from experiencing debilitating head injuries. Sports are the second-leading cause of traumatic brain injuries for youth 15-24 years old, and athletes suffer up to 3.8 million concussions every year. An extensive National Academy of Sciences report, Sports-Related Concussions in Youth: Improving the Science, Changing the Culture, previously found that there is a lack of scientific evidence that helmets and other protective devices designed for young athletes reduce concussion risk — yet some manufacturers continue to use false advertising claims that prevent athletes, parents and coaches from making informed safety decisions.
In 2012, the Federal Trade Commission (FTC) warned nearly 20 sports equipment manufacturers that they might be making deceptive concussion prevention claims, but the FTC’s actions thus far have not been an effective deterrent. The Youth Sports Concussion Act would empower the FTC to seek civil penalties in such cases.
“With Super Bowl 50 just days away, we want to raise awareness of this problem. Sports are an important way for our kids to stay active and bring communities together, but parents, players and coaches should be confident that they have all the facts they need to make important safety decisions,” Udall said. “Unfortunately, some companies appear to be taking advantage of rising concerns about concussions and marketing ‘safety’ products that do little to protect players. We need to crack down on misleading advertising and ensure that all our athletes can have fun and play smart.”
Udall has led efforts in Congress to improve equipment safety standards and curb false advertising claims, focusing on ensuring parents, coaches and players have the information they need to make important decisions about how to prevent head injuries. A previous version of the Youth Sports Concussion Act passed the Senate Commerce Committee in April 2014. Last year, Udall and Sen. Bill Nelson (D-Fla.) called on the FTC to investigate potentially misleading safety claims used to sell soccer headgear. Udall also worked to include several concussion prevention provisions in December’s appropriations bill.
“One thing’s certain about Minnesotans — we love our sports. But whether it’s football, hockey, or the many other sports we play and love, parents, coaches, and young athletes must be equipped with the facts and informed of the risks when making safety decisions,” Klobuchar said. “This bipartisan bill will protect our athletes and help make sure they can continue to compete on and off the field safely.”
“Today we are sending children onto football fields unaware of the long-term dangers of concussions and head traumas. But we know that people as young as 18 — people who never played a down of professional or even college football — show evidence of CTE,” Blumenthal said. “Though the dangers of head injuries are real, the science around prevention is still developing. This legislation empowers the FTC to crack down on manufacturers of athletic equipment who use misleading safety claims to profit off parents’ fears. False advertising regarding a particular gear’s safety features puts children’s short and long-term health at risk. Our youngest athletes — our future sports heroes — deserve truthful and accurate information to make informed decisions so that the sports they play today can be sports they play for a lifetime.”
“We want young people to be able to compete and achieve in sports, but we want them to be safe,” said Pascrell, co-founder and co-chair of the Congressional Brain Injury Task Force. “This bill will hold manufacturers accountable and ensure all sports equipment meets standards worthy of our kids’ safety. When the safety of our children, the safety of the minds of our future generation, is at stake, no precaution is too great.”
“While we all love to watch our kids play sports, we never want to see our children get seriously injured,” said Rooney, co-chair of the Congressional Brain Injury Task Force. “This bill ensures that protective sports gear is properly advertised and marketed — so if you buy a helmet for your child that says it ‘reduces the risk’ of concussion, you know that you’re buying something that is scientifically proven to help keep your child safe. Safety standards in youth sports are so important, especially so my three sons are able to play on safer fields than the ones I once competed on.”
Numerous sports, medical and consumer organizations have supported the Youth Sports Concussion Act, including:
Menu
LOS ALAMOS