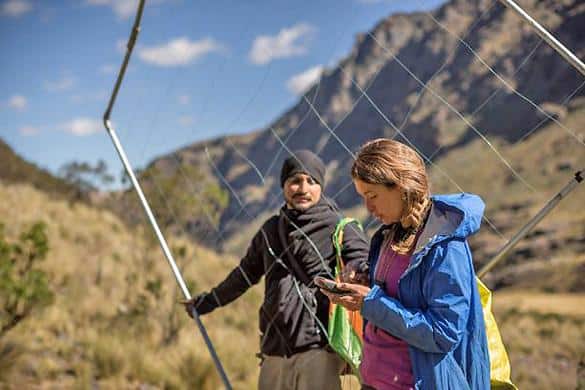 Plot used to sample landscapes in the Andes and the Alps. Photo by Anaïs Zimmer/UT-Austin 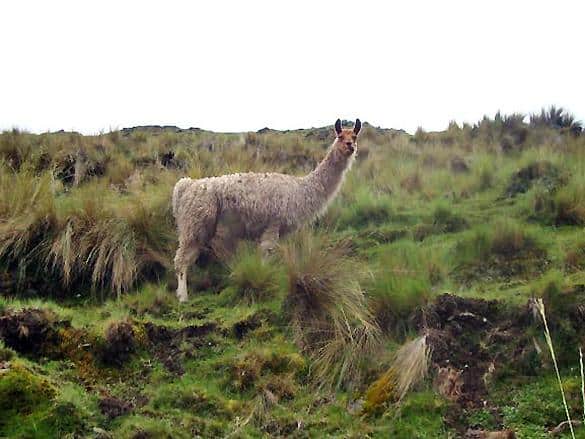 A llama near the village of Patacancha in the Peruvian Andes. Photo by Lauren Lipuma

The rapid retreat of glaciers from alpine regions around the world could result in widespread ecosystem losses, according to new research. Now, scientists are exploring a hairy solution to this hairy problem in the form of llamas.

As glaciers retreat with increasing speeds, they leave behind bare swaths of land. But plants found downstream of glaciers will not necessarily be able to expand to fill the new space, resulting in less-diverse ecosystems that don’t provide crucial animal habitats or services like water cycling and slope stabilization.

Researchers at the University of Texas at Austin are studying these post-glacier landscapes in the Andes and the Alps to predict how ecosystems in areas adjacent to glaciers will change in the coming decades and to find ways to minimize habitat losses. Glacial melt supplies water to downstream environments—wetlands, grasslands and forests—which store carbon and stabilize mountain slopes.

“Mountain communities depend on glaciers,” said Anaïs Zimmer, a graduate student at UT Austin who presented the work this week at AGU’s Fall Meeting in San Francisco. “So what will we do when we don’t have glaciers?”

To begin addressing that question and to better understand how and when ecosystems form on bare, “almost sterile emerging terrain,” Zimmer spent months high in the Andes and the Alps surveying moraines that were recently covered by glaciers. She compared soil samples and plant community characteristics, such as the number of species per plot and the percentage of the ground covered by vegetation at sites located different distances from the glaciers that had been exposed for anywhere from a few months to 38 years.

New plant communities generally sprout up quickly, she found. “It’s amazing how nature has this power to colonize,” Zimmer said.

But the flora isn’t fast enough to keep pace with the rapid disappearance of glaciers. In particular, plants that rely on animals to spread their seeds find it increasingly difficult to establish themselves on land left behind by glaciers. As the ice retreats to higher elevations, fewer animals venture to the frigid and dry landscapes. Some plants that bordered glaciers at lower elevations can no longer migrate upwards at all, such as species of the flowering, grass-like Rush family found in Andean wetlands.

As a result, the Andes risk losing regular water cycles, and in the Alps, the loss of glaciers threatens the stability of mountain slopes.

To explore land-management options that could help spread diverse, healthy ecosystems in the Andes, Zimmer is now turning to an unusual strategy: llamas.

Llamas are one of the few animals that traverse the rocky, high-altitude post-glacial landscapes. These alpine grazers could help plant communities take root on new ground faster by providing fertilizer, dispersing seeds through waste, and breaking up cryptogamic crust, a layer of cyanobacteria, moss and lichen that forms over bare ground and can prevent new plants from taking root. Wild goats in the Alps could potentially offer some of the same benefits. Zimmer’s current research compares the success of plant colonization at post-glacier sites with and without llamas.