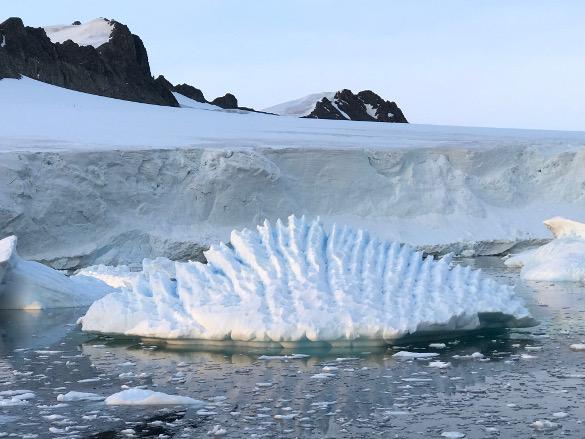 An iceberg at Marguerite Bay on the Antarctic Peninsula. New research finds 24 percent of West Antarctic ice is now unstable. Courtesy/Andrew Shepherd
AGU News:
WASHINGTON, D.C. — In only 25 years, ocean melting has caused ice thinning to spread across West Antarctica so rapidly that a quarter of its glacier ice is now affected, according to a new study.
Scientists at the Centre for Polar Observation and Modelling (CPOM), based at the University of Leeds in the United Kingdom, have combined 25 years of European Space Agency satellite altimeter measurements and a model of Antarctica’s regional climate to track changes in snow and ice cover across the continent.
A new study in the AGU journal Geophysical Research Letters finds Antarctica’s ice sheet has thinned by up to 122 meters in places, with the most rapid changes occurring in West Antarctica where ocean melting has triggered glacier imbalance.
This means the affected glaciers are unstable as they are losing more mass through melting and iceberg calving than they are gaining through snowfall.
The research team found the pattern of glacier thinning has not been static over time. Since 1992, the thinning has spread across 24 percent of West Antarctica and over the majority of its largest ice streams – the Pine Island and Thwaites Glaciers – which are now losing ice five times faster than they were at the start of the survey.
The study used over 800 million measurements of the Antarctic ice sheet height recorded by the ERS-1, ERS-2, Envisat, and CryoSat-2 satellite altimeter missions between 1992 and 2017 and simulations of snowfall over the same period produced by the RACMO regional climate model.
Together, these measurements allow changes in the ice sheet height to be separated into those due to weather patterns, such as less snowfall, and those due to longer term changes in climate, such as increasing ocean temperatures that eat away ice.
“In parts of Antarctica, the ice sheet has thinned by extraordinary amounts, and so we set out to show how much was due to changes in climate and how much was due to weather,” said Andy Shepherd, a polar scientist at the University of Leeds, director of CPOM and lead author of the new study.
To do this, the team compared the measured surface height change to the simulated changes in snowfall, and where the discrepancy was greater they attributed its origin to glacier imbalance.
They found that fluctuations in snowfall tend to drive small changes in height over large areas for a few years at a time, but the most pronounced changes in ice thickness are signals of glacier imbalance that have persisted for decades.
“Knowing how much snow has fallen has really helped us to detect the underlying change in glacier ice within the satellite record,” Shepherd said. “We can see clearly now that a wave of thinning has spread rapidly across some of Antarctica’s most vulnerable glaciers, and their losses are driving up sea levels around the planet.
Altogether, ice losses from East and West Antarctica have contributed 4.6 millimeters to global sea level rise since 1992, according to the study.
“This is an important demonstration of how satellite missions can help us to understand how our planet is changing,” said Marcus Engdahl, an Earth observation scientist at the European Space Agency and co-author of the new study. “The polar regions are hostile environments and are extremely difficult to access from the ground. Because of this, the view from space is an essential tool for tracking the effects of climate change.” 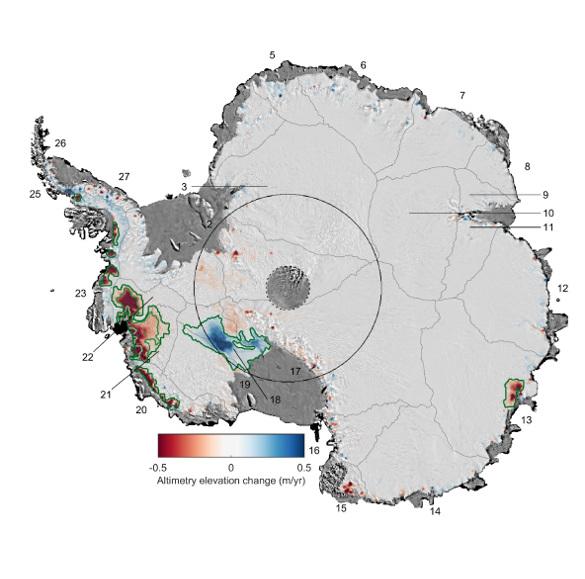 This map shows changes to the Antarctic ice sheet’s thickness from 1992 to 2017. Warming ocean waters have caused the ice to thin so rapidly that 24 percent of glaciers in West Antarctica are now affected. In some places, glacier thinning has spread far inland. Courtesy/Shepherd et al 2019/Geophysical Research Letters/AGU 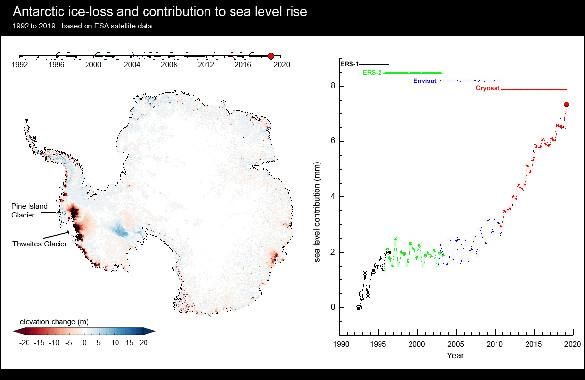