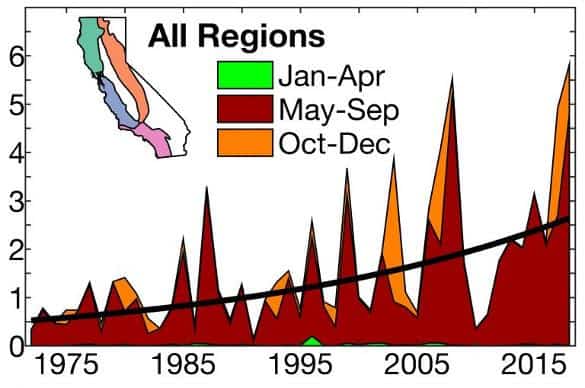 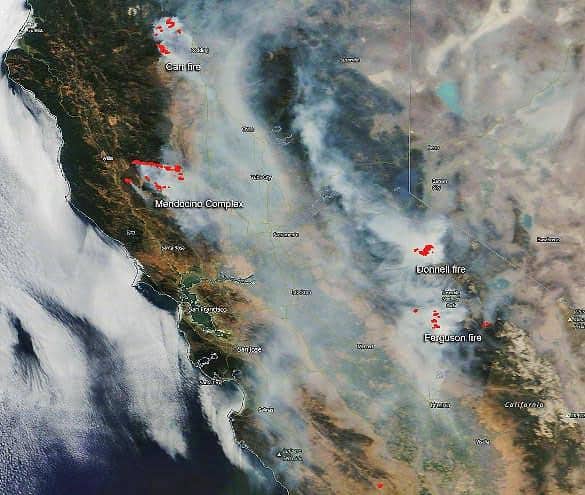 A satellite image, Aug. 6, 2018, shows smoke from multiple large California wildfires. The fires themselves, detected by thermal imagery, are in red. Courtesy/NASA
AGU News:
WASHINGTON, D.C. ― Against a backdrop of long-term rises in temperature in recent decades, California has seen ever higher spikes in seasonal wildfires, and, in the last two years, a string of disastrous, record-setting blazes.
This has led scientists, politicians and media to ponder: what role might warming climate be playing here? A new study in AGU’s journal Earth’s Future combs through the many factors that can promote wildfire, and concludes that in many, though not all, cases, warming climate is the decisive driver.
The study finds in particular that the huge summer forest fires that have raked the North Coast and Sierra Nevada regions recently have a strong connection to arid ground conditions brought on by increasing heat. It suggests that wildfires could grow exponentially in the next 40 years, as temperatures continue to rise.
The study notes that average summer temperatures in the state have risen 1.80 degrees Celsius (3.25 degrees Fahrenheit) since 1896, with three-quarters of that increase occurring since the early 1970s. From 1972 to 2018, the area burned annually has shot up fivefold, fueled mainly by a more than eightfold spike in summer forest fires. The researchers say the summer forest-fire increases are driven by a simple mechanism: when air heats up even modestly, it causes more moisture to evaporate from soils and vegetation.
The result: fires start more easily, and can spread faster and farther. During the fall, and in non-forested areas, different dynamics may be at work and the results are less clear; but the researchers project that climate-driven aridity is likely to play a growing role there as well.
“It’s not a surprise to see that climate has this effect in forests, but California is so big and so variable, there is no one-size-fits-all explanation for how climate might affect wildfires across the board,” said the study’s lead author, Park Williams, a bioclimatologist at Columbia University’s Lamont-Doherty Earth Observatory. “We have tried to provide one-stop shopping to show people how climate has or, in some cases, hasn’t affected fire activity.”
Williams and his colleagues have already shown in a 2016 study that heightened temperatures and resulting aridity on the ground has doubled the area burned in forest fires over wider areas of the U.S. West in past decades. The premise that warmer air draws moisture from the ground level — a phenomenon known as vapor pressure deficit — is already well established. However, many confounding factors can shift fire risk up or down, and so it is not always possible to measure the effects of vapor pressure deficit.
In California, human infrastructure is sprawling into forests, introducing more chances for people to both cause fires and suffer from them. And a century of efforts to suppress virtually all fires has led to a buildup of flammable materials in many forests. On the other hand, fragmentation of forest landscapes by human intrusion may in some cases limit the spread of fires. Rainfall and snow can vary year to year, sometimes adding to fire risk, sometimes subtracting. And areas dominated by shrubs or grasses instead of trees may not react the same way.
The researchers combined data from many sources, some of it going back more than 100 years. They found that growing temperature-induced vapor pressure deficit accounted for nearly all the growth in forest fires from 1972-2018. In 2017, a modern state record was set for the largest individual wildfire (more than 285,000 acres) and the most destructive (5,636 structures burned, 22 people killed).
2018 saw a new record for total annual area burned (almost 1.7 million acres), and the 2017 records were broken for the biggest individual fire (the Mendocino Complex fire, which took out 464,500 acres) and the most destructive: the Camp Fire, which burned 18,804 structures and killed 85 people. The Camp Fire leveled almost the entire forest community of Paradise.
“The ability of dry fuels to promote large fires is non-linear, which has allowed warming to become increasingly impactful,” says the study. “Human-caused warming has already significantly enhanced wildfire activity in California, particularly in the forests of the Sierra Nevada and the North Coast, and will likely continue to do so in the coming decades.”
That said, the authors note that the effects of climate are highly seasonal, and can vary depending on vegetation type, topography and human settlement patterns across California’s highly diverse landscape. In summer, they found that summer fires did not increase in many non-forested areas dominated by grasses or shrubs. This, they say, was probably due to a combination of intense firefighting and prevention efforts, and reduced vegetation due to drought. In fall, destructive fires have grown, but because the dynamics of this season are complex, the effects of warming climate are not as obvious — at least not yet.
The researchers say fall fires are driven in large part by powerful winds sweeping from the highland interior, as well as the amount and timing of precipitation, which tends to pick up around this time of year. These factors wax and wane from year to year, perhaps masking the effect of overall warming. But that effect is indeed just starting to show up in fall, and is likely to become more evident in the future, says Williams.
Menu
Los Alamos
91°
Sunny
5:48am8:23pm MDT
Feels like: 91°F
Wind: 10mph NE
Humidity: 8%
Pressure: 29.79"Hg
UV index: 9
TueWedThu
90/64°F
91/64°F
88/64°F
Weather forecast Los Alamos, New Mexico ▸