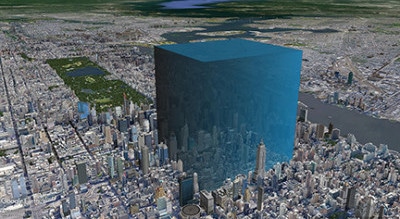 Visualization of 600-750 million cubic meters lost to the ocean with the demise of the ice-covered lake. Courtesy/ Philipp Arndt / Scripps Institution of Oceanography at UC San Diego. 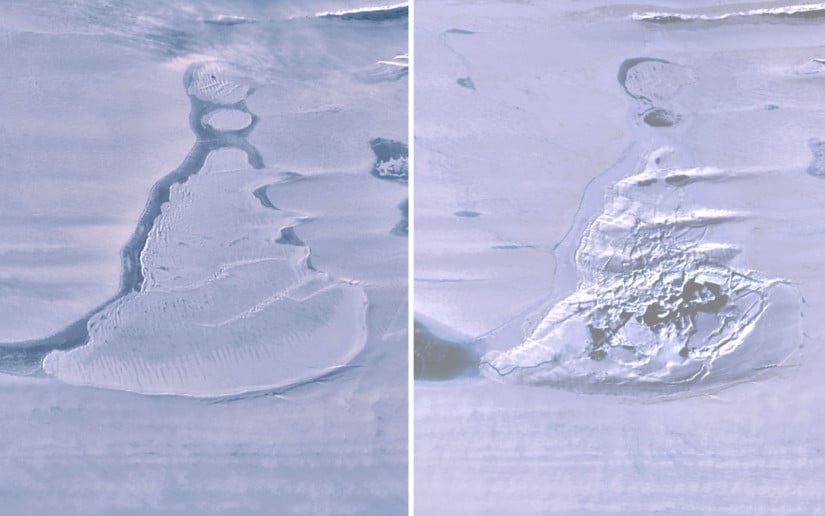 Landsat 8 images over the Southern Amery Ice Shelf show the ice-covered lake before drainage and the resulting ice doline with summer meltwater. Courtesy/AGU

A global team of scientists including several from Scripps Institution of Oceanography at the University of California San Diego discovered the sudden demise of a large, deep, ice-covered lake on the surface of an Antarctic ice shelf.

This rare event, chronicled in a study published today in the journal Geophysical Research Letters, occurred during the 2019 Antarctic winter on Amery Ice Shelf in East Antarctica, and it is estimated that 600-750 million cubic meters (21-26 billion cubic feet) of water, about twice the volume of San Diego Bay, were lost to the ocean.

Study authors used images from a radar satellite which can “see” during the polar night to pin the event’s timing down to a week or less in June. After drainage, in place of the lake, there was a crater-like depression in the ice shelf surface, covering about eleven square kilometers (4.25 square miles). This surface depression, known as an ice “doline”, contained the fractured remains of the ice cover.

“We believe the weight of water accumulated in this deep lake opened a fissure in the ice shelf beneath the lake, a process known as hydrofracture, causing the water to drain away to the ocean below,” said study lead author Roland Warner, a glaciologist with the Australian Antarctic Program Partnership at the University of Tasmania.

The hydrofracture process has been implicated in the collapse of smaller ice shelves in the Antarctic Peninsula, where meltwater forms on the surface of ice shelves during austral summer, but it is not often seen driving through ice as thick as the 1400 meters (4,590 feet) at this location on Amery Ice Shelf.

The austral winter event was also captured by a green-light laser instrument on NASA’s ICESat-2. This satellite transmits pulses of photons and accurately locates the reflection point of each photon it receives back from Earth.

Repeat orbits of ICESat-2 on the exact ground tracks before and after the lake drainage revealed the vertical scale of the disruption. The ice surface fell as much as 80 meters (260 feet) in the doline cavity, even though the loss of the water load made the floating ice shelf lighter and ocean pressure caused it to flex upwards, with the lake’s immediate surroundings rising as much as 36 meters (118 feet).

“It is exciting to see ICESat-2 show us details of processes that are occurring on the ice sheet at such fine spatial scale,” said co-author Helen Amanda Fricker, a glaciologist at Scripps Institution of Oceanography who has long studied active sub-glacial lakes, discovering them in 2007. “Since surface meltwater on ice shelves can cause their collapse which ultimately leads to sea-level rise when grounded ice is no longer held back, it’s important to understand the processes that weaken ice shelves.”

In recent decades with rising air temperatures, some ice shelves have experienced greater surface melting, and the most recent model projections for future warming show that trend continuing and creating more melt lakes. This increases the risk of widespread hydrofracturing, which could lead to ice shelves collapsing, permitting faster discharge of ice from grounded ice sheets and increases in sea level. Now, possible increased flows into deep, ice-covered lakes and hydrofracture of thick ice shelves should also be considered in projections for future warming, said researchers.

The team also used surface elevation maps generated by the Polar Geospatial Center (PGC) at the University of Minnesota to show that the disruption modified the regional landscape across 60 square kilometers (23 square miles).

The uplift of the lake created a new lake out of a shallow arm of the original one. During the next melt season this lake filled within a few days at more than a million cubic meters per day and overflowed into the doline cavity. When ICESat-2 crossed the doline again a few days later, the team was able to measure a meltwater channel 20 meters (65 feet) wide, freshly cut into the doline, detecting the water surface at three meters depth, and photons scattered from the stream bed a further three meters below.

The authors say that it is too early to conclude that the drainage of this meltwater lake was related to broader trends like the warming of the climate around Antarctica. With this new observation capability, and as more ICESat-2 and PGC data are collected, Fricker says they will be able to further understand how common these deep lakes are and how they evolve over time.

“This abrupt event was apparently the culmination of decades of melt-water accumulation and storage beneath that insulating lid of ice,” said co-author Jonathan Kingslake, professor at Lamont Doherty Earth Observatory at Columbia University, who aided in the measuring of the surface meltwater.

The future of the newly formed doline is uncertain. It may accumulate meltwater again or drain to the ocean more frequently. It appears that the fissure reopened briefly in the 2020 melt season. It is certain that scientists will now be watching.

The research by U.S. authors was funded by NASA and the National Science Foundation. Additional co-authors from Scripps Oceanography include graduate students Susheel Adusumilli and Philipp Arndt.