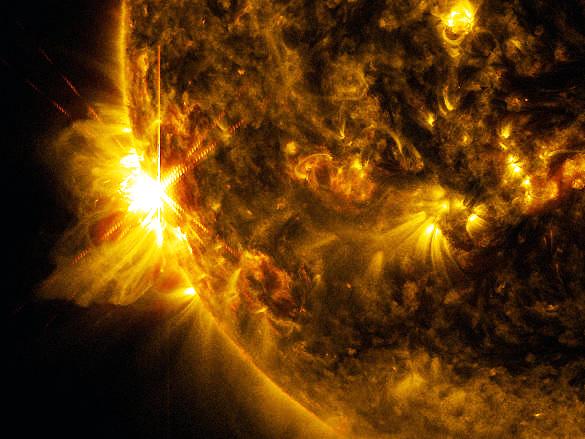 A solar flare bursts off the left limb of the sun in this image captured by NASA’s Solar Dynamics Observatory. Courtesy/NASA/SDO/Goddard/Wiessinger
AGU News:
A strong solar storm in 1972 caused widespread disturbances to satellites and spacecraft, and may have led to the detonation of mines during the Vietnam War, according to new research showing the event may have been a more devastating solar storm than previously thought.
In a new study in Space Weather, a journal of the American Geophysical Union, researchers pieced together data and historical records related to the solar activity of 1972 to better understand the nature of the solar storm. In the process, they uncovered an incident where sea mines off the coast of Vietnam were detonated by the solar event.
The study’s authors suggest the solar storm was a Carrington-class storm, meaning it may have been similar to the strongest storm on record, the Carrington Event of 1859. They hope the new findings will motivate further investigation of the storm and help scientists prepare for solar events in the future.
“This is a Carrington-class storm that has gone under the radar,” said Delores Knipp, a research professor at the University of Colorado Boulder and senior research associate at the High Altitude Observatory of the National Center for Atmospheric Research in Boulder, Colorado. “What I am asking scientists to do is go back and reinvestigate with new eyes.”
Intense solar activity in early August 1972 hurled hazardous radiation, solar plasma and charged particles in Earth’s direction. After reaching Earth on Aug. 4, the highly energetic particles and magnetized plasma disturbed both human technology and natural phenomena, Knipp said.
The solar activity damaged spacecraft and satellites, and led to power issues across North America. Auroras, resulting from charged particles from the Sun interacting with air in Earth’s upper atmosphere, were visible in the northern United States and southern United Kingdom.
“Had we had astronauts on the way to the Moon, it appeared that they would have become very, very ill from the radiation sickness,” Knipp said.
On the same day, while observing the coastal waters of North Vietnam from aircraft, US Navy personnel witnessed dozens of destructor sea mines exploding with no obvious cause. These mines were airdropped by the US Navy into Vietnamese waters as part of Operation Pocket Money, a mission aimed at blocking supplies from reaching North Vietnamese ports.
“The Navy promptly investigated the peculiar explosions, working with the National Academy of Sciences and the National Oceanic and Atmospheric Administration, to conclude that more than 4,000 mine detonations were most likely triggered by the solar storm,” Knipp said.
A now declassified report about the mining of North Vietnam from the Chief of Naval Operations at the Mine Warfare Project Office noted, “this was the first example of what happens to a major mining campaign in the face of the vagaries of nature.”
Many of the destructor mines were designed to trigger if they sensed changes in magnetic fields associated with moving ships. Solar activity is known to perturb Earth’s magnetic field, and in early August 1972, the perturbations were likely strong enough to meet the magnetic requirements for detonation, Knipp said.
“I was able to connect all these things and say well, not only did the sea mines blow up and do we have pretty good evidence of that … but the likely way this would have happened was if this was really a storm of much greater proportion than anyone was understanding,” Knipp said.
As humanity becomes more intertwined with and dependent on technology, the effects of solar activity will become increasingly important, Knipp said.
Dependence on satellite systems, like GPS, could make today’s world more vulnerable to another event like the 1972 storm.
“If the same storm were to occur today, how well could we withstand it?” Knipp said. “It is worth asking and answering that question.” 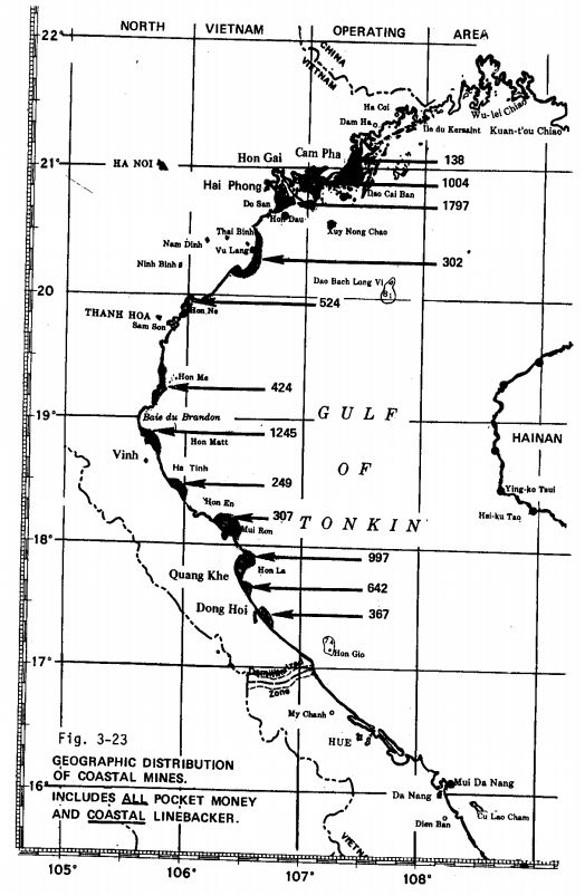