AGU: Melting Of Arctic Mountain Glaciers Unprecedented In Past 400 Years 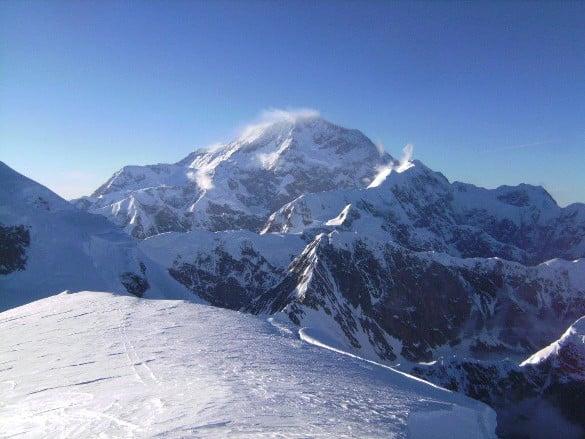 Scientists spent a month in Denali National Park in 2013 drilling ice cores from the summit plateau of Mt. Hunter. The ice cores showed the glaciers on Mt. Hunter are melting more now than at any time in the past 400 years. Courtesy/Dominic Winski
AGU News:
WASHINGTON, D.C. — Glaciers in Alaska’s Denali National Park are melting faster than at any time in the past four centuries because of rising summer temperatures, a new study finds.
New ice cores taken from the summit of Mt. Hunter in Denali National Park show summers there are least 1.2-2 degrees Celsius (2.2-3.6 degrees Fahrenheit) warmer than summers were during the 18th, 19th, and early 20th centuries. The warming at Mt. Hunter is about double the amount of warming that has occurred during the summer at areas at sea level in Alaska over the same time period, according to the new research.
The warmer temperatures are melting 60 times more snow from Mt. Hunter today than the amount of snow that melted during the summer before the start of the industrial period 150 years ago, according to the study. More snow now melts on Mt. Hunter than at any time in the past 400 years, said Dominic Winski, a glaciologist at Dartmouth College in Hanover, New Hampshire and lead author of the new study published in the Journal of Geophysical Research: Atmospheres, a journal of the American Geophysical Union.
The new study’s results show the Alaska Range has been warming rapidly for at least a century. The Alaska Range is an arc of mountains in southern Alaska home to Denali, North America’s highest peak.
The warming correlates with hotter temperatures in the tropical Pacific Ocean, according to the study’s authors. Previous research has shown the tropical Pacific has warmed over the past century due to increased greenhouse gas emissions.
The study’s authors conclude warming of the tropical Pacific Ocean has contributed to the unprecedented melting of Mt. Hunter’s glaciers by altering how air moves from the tropics to the poles. They suspect melting of mountain glaciers may accelerate faster than melting of sea level glaciers as the Arctic continues to warm.
Understanding how mountain glaciers are responding to climate change is important because they provide fresh water to many heavily-populated areas of the globe and can contribute to sea level rise, Winski said.
“The natural climate system has changed since the onset of the anthropogenic era,” he said. “In the North Pacific, this means temperature and precipitation patterns are different today than they were during the preindustrial period.”
Assembling a long-term temperature record
Winski and 11 other researchers from Dartmouth College, the University of Maine and the University of New Hampshire drilled ice cores from Mt. Hunter in June 2013. They wanted to better understand how the climate of the Alaska Range has changed over the past several hundred years, because few weather station records of past climate in mountainous areas go back further than 1950.
The research team drilled two ice cores from a glacier on Mt. Hunter’s summit plateau, 13,000 feet above sea level. The ice cores captured climate conditions on the mountain going back to the mid-17th century. Watch a video of their drilling operations here.
The physical properties of the ice showed the researchers what the mountain’s past climate was like. Bands of darker ice with no bubbles indicated times when snow on the glacier had melted in past summers before re-freezing.
Winski and his team counted all the dark bands – the melt layers – from each ice core and used each melt layer’s position in the core to determine when each melt event occurred. The more melt events they observed in a given year, the warmer the summer.
They found melt events occur 57 times more frequently today than they did 150 years ago. In fact, they counted only four years with melt events prior to 1850. They also found the total amount of annual meltwater in the cores has increased 60-fold over the past 150 years.
The surge in melt events corresponds to a summer temperature increase of at least 1.2-2 degrees Celsius (2.2-3.6 degrees Fahrenheit) relative to the warmest periods of the 18th and 19th centuries, with nearly all of the increase occurring in the last 100 years. Because there were so few melt events before the start of the 20th century, the temperature change over the past few centuries could be even higher, Winski said.
Connecting the Arctic to the tropics
The research team compared the temperature changes at Mt. Hunter with those from lower elevations in Alaska and in the Pacific Ocean. Glaciers on Mt. Hunter are easily influenced by temperature variations in the tropical Pacific Ocean because there are no large mountains to the south to block incoming winds from the coast, according to the researchers.
They found during years with more melt events on Mt. Hunter, tropical Pacific temperatures were higher. The researchers suspect warmer temperatures in the tropical Pacific Ocean amplify warming at high elevations in the Arctic by changing air circulation patterns. Warmer tropics lead to higher atmospheric pressures and more sunny days over the Alaska Range, which contribute to more glacial melting in the summer, Winski said.
“This adds to the growing body of research showing that changes in the tropical Pacific can manifest in changes across the globe,” said Luke Trusel, a glaciologist at Rowan University in Glassboro, New Jersey who was not connected to the study. ” It’s adding to the growing picture that what we’re seeing today is unusual.” 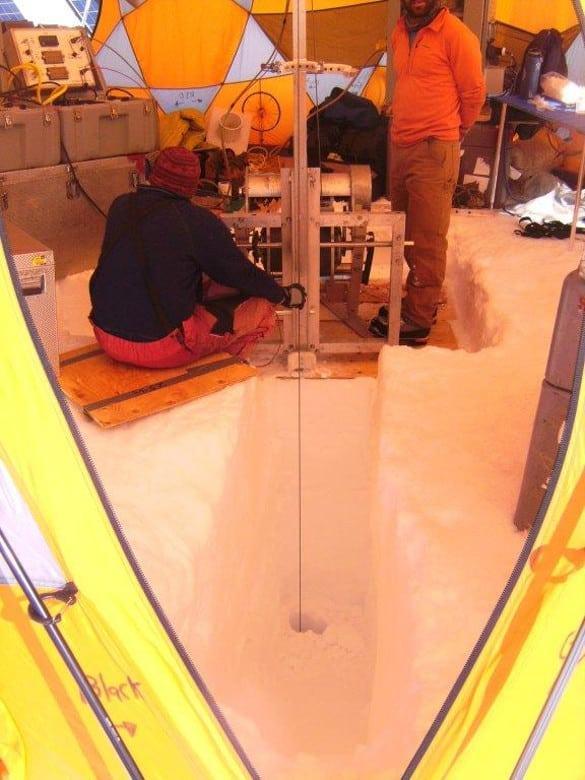 Researchers drill an ice core at their camp on the summit plateau of Mt. Hunter. Courtesy/Dominic Winski. 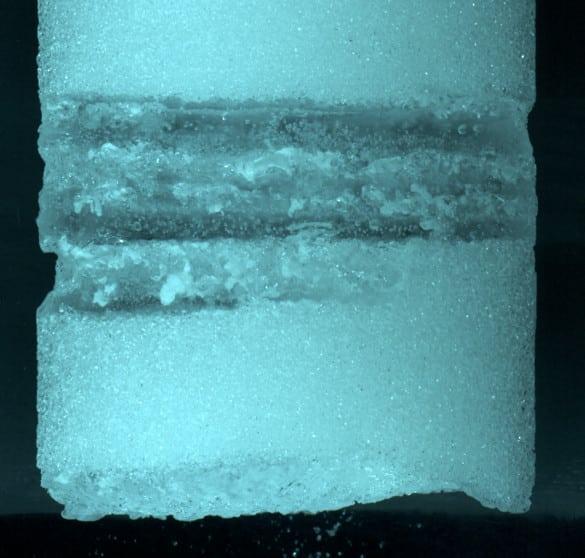 One of the ice cores taken from Mt. Hunter in June 2013. The bands of dark ice represent times when glacier snow melted and refroze in past summers. Courtesy/Dominic Winski
Menu
LOS ALAMOS