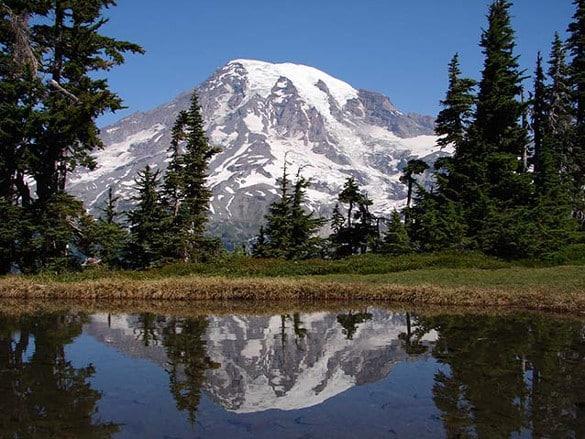 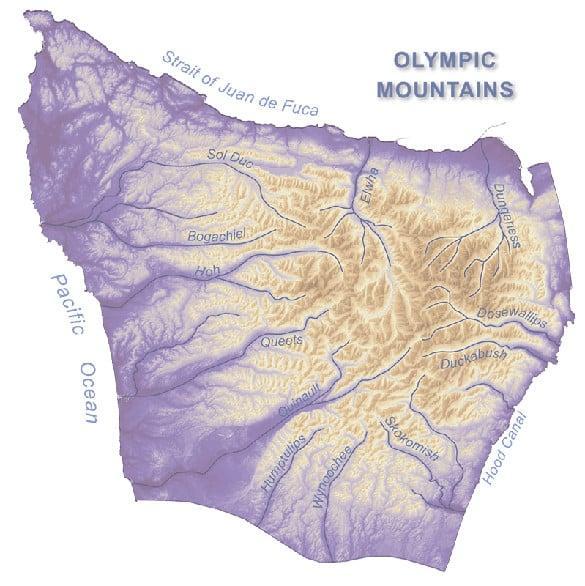 The Olympic Mountain Province rises to an elevation of 7,980 feet. The higher peaks are covered with glaciers and snowfields, feeding the many rivers that radiate outward from the center of the range. Courtesy/Washington State Department of Natural Resource 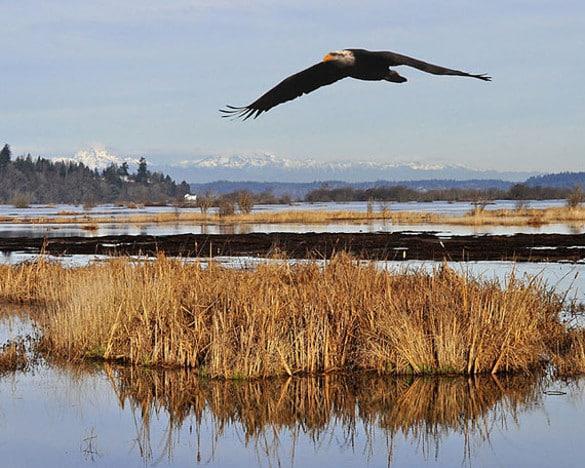 The Nisqually Reach region has been identified as an area important for fish, aquatic mammals, and benthic habitats and an area of unique geologic processes. Courtesy/Washington State Department of Natural Resources
AGU News:
Accelerated melting of mountain glaciers in the Cascade Range could impact water supplies in the Pacific Northwest region over the coming decades, according to new research.
Seasonal snow and ice accumulation cause glaciers in the Cascade Range mountains to grow a little every winter and melt a little every summer. This annual melt provides water for much of the Pacific Northwest, which includes Washington, Oregon, Idaho and parts of Montana. Inhabitants of the region utilize this water for drinking, crop irrigation, generating hydroelectric power and other uses. Glacier melt provides supplementary water when less snowmelt is available, alleviating drought conditions or other impacts of dry periods.
Over the past several decades, warming air temperatures have caused Pacific Northwest glaciers to melt faster than usual, and scientists have wondered what impact this will have on future water supplies in the region.
In a new study, scientists used computer modeling to estimate the flow of mountain glacial melt in six river basins in the Pacific Northwest. They used the model to estimate glacier mass loss and meltwater volume from 1960 to the present, and predict future changes to glacier mass and meltwater volume through 2099. They looked at both low-elevation areas up to 1,100 meters (3,609 feet) in elevation and high-elevation areas up to 4,440 meters (14,436 feet) in elevation.
The study found lower-elevation glaciers in the Cascades reached their peak melt in the latter half of the 20th century. This means river basins fed by runoff from these glaciers will have less water available during the dry season over the coming decades, according to the study’s authors. The results show that in some areas, declines in snow and glacier melt could lead to an 80 percent reduction in late summer river volumes by the end of the century.
The paper did not quantify consequences of changes in summer streamflow but some of these changes may have already begun impacting downstream systems, according to Chris Frans, formerly a Ph.D. student at the University of Washington in Seattle and now the lead on climate change studies for the northwest division of the U.S. Army Corps of Engineers. Frans is the lead author of the new study in Water Resources Research, a journal of the American Geophysical Union.
“[The Hood River is] heavily involved in vineyards and orchards where water is used for agricultural water supply,” he said. “Glacier melt in the northernmost river basin included in the study is used for hydro-electricity generation.”
While low-elevation glaciers have already hit their peak melt, high-elevation glacial melt is projected to peak around mid-century, according to Frans. For areas fed by these glaciers, increased glacier melt in the next several decades will partially buffer declining stream flows from other sources, such as groundwater and reduced snowpack.
“Glaciers can buffer water supplies. They melt when it’s really warm and there aren’t many other sources of water,” Frans said. “The buffering effects will sustain for the higher elevation areas, but not so much for the lower elevation maritime basins.”
After the high-elevation glaciers hit their melt peak around mid-century, the declining glacier melt will coincide with declining snow melt, resulting in lower river flows in the summer, according to the new study. Low stream flows can affect fisheries and ecosystems that are dependent on cold, reliable summer streamflow. Reservoirs in high-elevation areas depend on water flows to maintain levels high enough to support recreation and hydropower.
The overall impacts of glacial melt in the Pacific Northwest will vary depending on the system considered, Frans said. For the region as a whole, the shift of the snowmelt season to earlier in the year and the loss of snowpack will be the primary drivers impacting systems downstream.
“Glacier melt plays a more important role during the driest periods of the year,” he said. “Systems downstream of glaciers that rely on glacier melt to buffer low flow periods will suffer from increased variability of the low flow season. This is all linked to lesser volumes.”
Menu
Los Alamos
79°
Sunny
6:57am6:55pm MDT
Feels like: 79°F
Wind: 7mph N
Humidity: 12%
Pressure: 29.73"Hg
UV index: 5
SatSunMon
81/57°F
79/43°F
59/41°F
Weather forecast Los Alamos, New Mexico ▸
Previous
Next