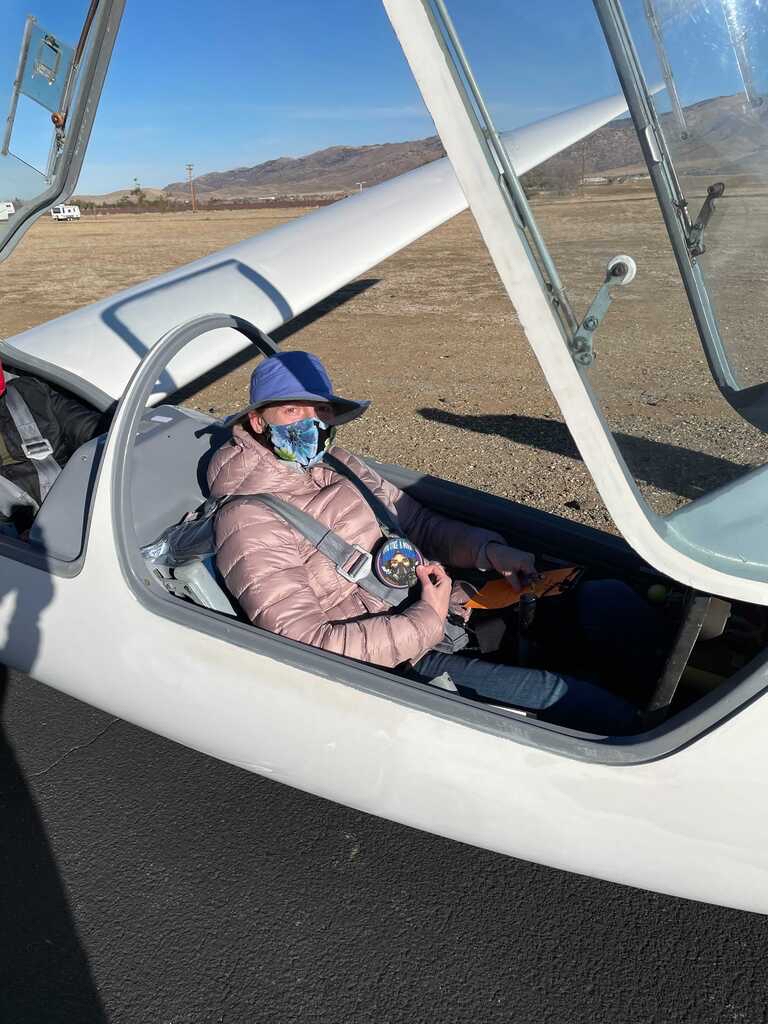 AFRL Space Test Fundamentals course graduate Evelyn Kent prepares for one of her course highlights – a glider ride. Kent is a member of the small cadre that graduated from the first STF course held at the U.S. Air Force Test Pilot School at Edwards AFB in California. She is taking along the ‘Fly Like a Girl’ patch given to girls STEM. Courtesy/AFRL 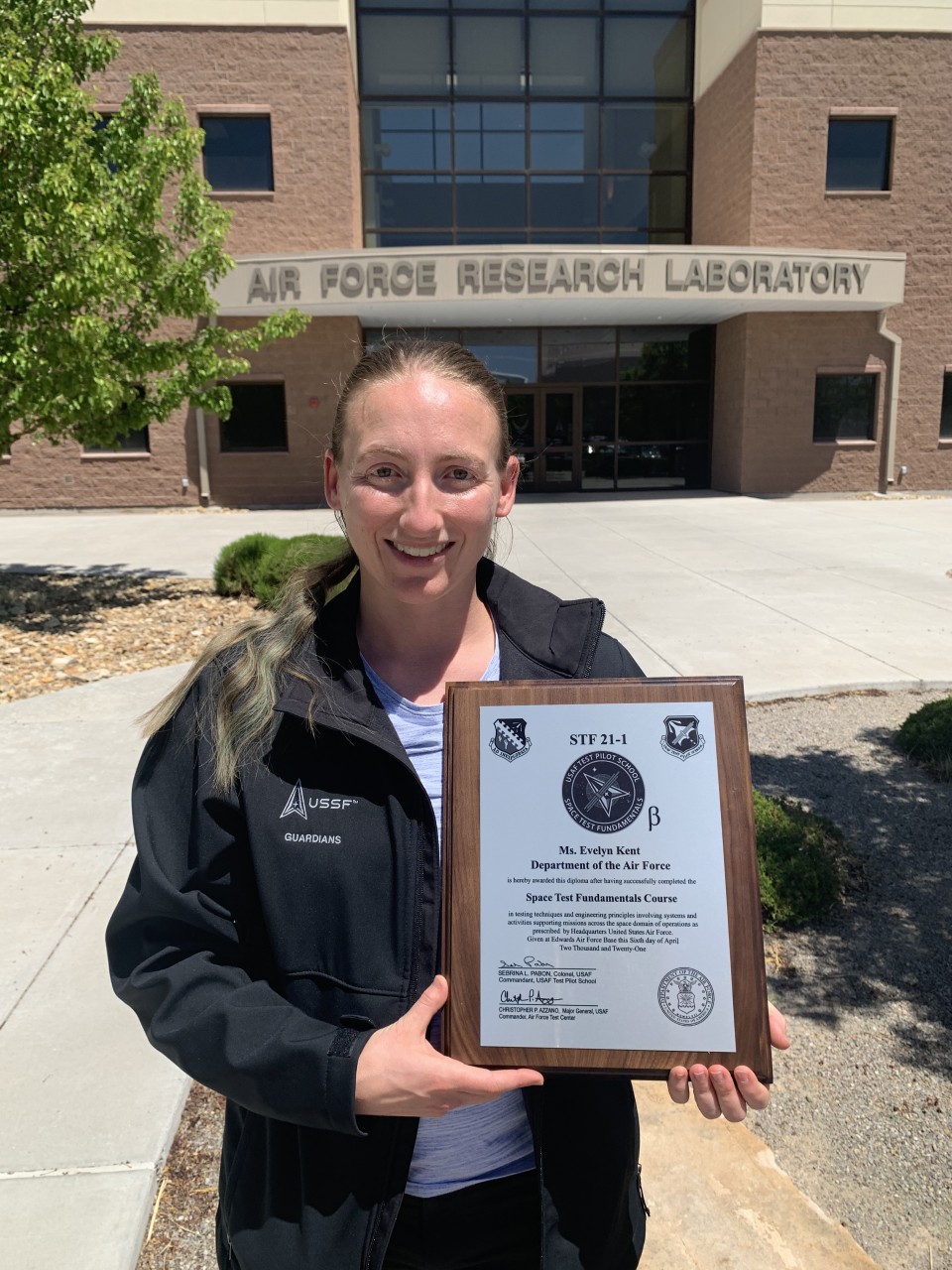 “The Space Test Fundamentals course was stood up to train and educate a cadre of test professionals within the Space Force, ready to conduct full-spectrum test and evaluation of space weapon systems,” said Kent, who works at AFRL’s Space Vehicles Directorate on Kirtland AFB. “TPS was charged to execute the course because of their longstanding reputation for test excellence.”

Kent explained that Air Force test pilots have been testing new flight systems for years, using a set of standards, while the military has generally accepted space systems from the contractor and then maintained them in status-quo operations.

“TPS has trained astronauts and other space professionals, but STF is the first course dedicated to the space domain rather than the air domain,” Kent said. “The U.S. Space Force will need to adapt doctrine to unique physics of the space domain. Space operators must be equipped with deep knowledge of their systems and the ability to use their knowledge to make timely decisions. The training and education provided by STF is a great foundation toward that goal.”

Kent further stated that as the Space Force continues to rely on industry partners to help develop these capabilities, the U.S.’s space test cadre must be equipped to understand the development and test process and make confident, informed decisions.

“We have only recently begun discussing space as a warfighting domain, considering space domain operations and procedures, and recognizing the importance of really operating our systems, rather than just maintaining them,” Kent said. “In the near future, we will need to test and deliver space capabilities faster than ever before, without losing any rigor in the process.”

Kent talked about several aspects of the course that were especially important to her.

“There are three highlights that I cannot choose between!” she said. “The first was flying in gliders during our first month, as we practiced the test concepts of “predict, test, validate” in an exploration of the glider

performance envelope. The second was visiting Space Force squadrons, and in particular seeing a space proximity operations simulator that will help us understand orbital dynamics and think about how space operations could evolve in the future.”

“Finally, I truly enjoyed hosting the class on a tour of the AFRL Space Vehicles Directorate’s test capabilities during our multi-destination field trip. We have many great examples of government-owned space test capabilities, which is unusual to find in more traditional space acquisitions jobs.”

The course did identify some challenges that all revolved around lack of connections, Kent remarked.

“Our existing capabilities are stove-piped and becoming obsolete; our space organizations don’t have a lot of crossflow; and the USSF does not yet have test documentation standards,” Kent said. “During the course, we discussed what space test policy and documentation should look like, and we developed relationships with each other that will hopefully enable better inter-organization communication. I look forward to a future where we meet regularly at some kind of space test conference, similar to the existing Society of Flight Test Engineers conference.”

The Egg Harbor Township, N.J. native has been working with AFRL since 2018 when she was assigned to Kirtland AFB as a captain in the U.S. Air Force. She received her commission from the United States Air Force Academy in 2012, and graduated with a Bachelor’s Degree in Astronautical Engineering with a minor in Japanese. Kent followed this with a master’s degree in the same discipline from the Air Force Institute of Technology.

In 2020, Kent transitioned from active duty to the federal civil service, where she continued her work with the directorate’s Space Experiments and Integration Division.

“I separated from active service because I love my job here, operating experimental space vehicles, and was fortunate to keep my position,” Kent said. “Working on space capabilities really makes me feel like a part of something bigger than myself. Although we never see the hardware after it is launched into orbit, hearing about the important effects and experiment results that our systems generate is always a moment of pride.”

Kent explained that operating space systems is especially exciting because of the dynamic nature of the work.

“There is always a new and unexpected challenge to conquer,” Kent said. “It’s exciting to be a part of an organization that supports both the Air and Space Forces. All the graduates of the course have been tagged with an identifier that will allow the Space Force to find them and place them in test-specific positions as the USSF organizes its test and acquisition workforce.”

Kent will continue her military career as a U.S. Air Force reservist and hopes to apply her test education to that job as well. She is anxiously awaiting the standup of the Space Force Reserves.

The Air Force Research Laboratory (AFRL) is the primary scientific research and development center for the Department of the Air Force. AFRL plays an integral role in leading the discovery, development, and integration of affordable warfighting technologies for our air, space, and cyberspace force. With a workforce of more than 11,500 across nine technology areas and 40 other operations across the globe, AFRL provides a diverse portfolio of science and technology ranging from fundamental to advanced research and technology development. For more information, visit: www.afresearchlab.com.