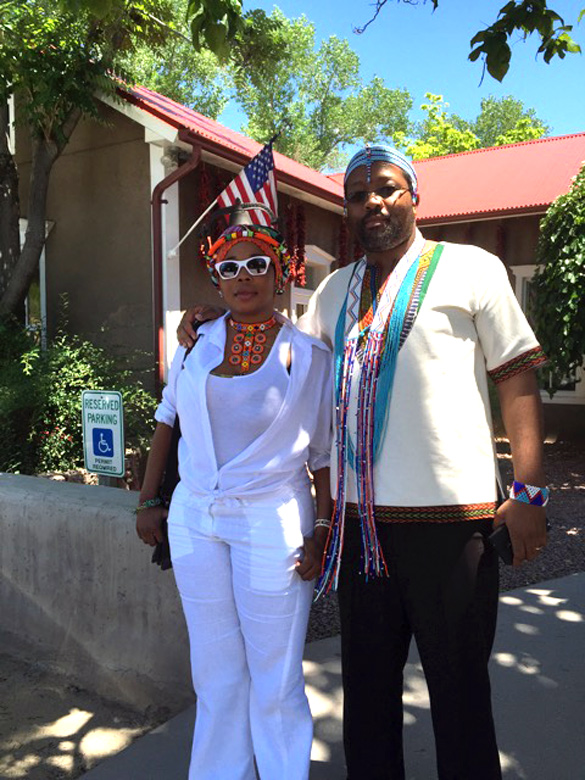 Los Alamos attracts international attention as well as visitors from around the world. One of those individuals who recently crossed oceans and time zones to visit the town was Prince “Zuko” Jongisilo Pokwana ka Menziwa and his wife Nosizwe from the AmaZizi Tribe of the AbaThembu Kingdom in South Africa.

Originally, Zuko planned to perform at the International Folk Art Market in Santa Fe, as well as Los Alamos’ ScienceFest this weekend, with the South African band, Dizu Plaatjies Ibuyambo, but the performances were cancelled due to issues with obtaining visas to travel to the U.S.

Despite the change in plans, Zuko and Nosizwe represented their tribe at numerous local events including a Rotary Club of Los Alamos meeting and a talk for the Culture on Tap event.

This is not the first time Zuko has visited Los Alamos. He accidentally stumbled upon the county last year.

“We came to Los Alamos because of the relations that started last year when we visited and brought a tribal group to come and perform at the Santa Fe Folk Art Festival.

Our travel agent mistakenly booked us at a hotel at the Los Alamos Hampton Inn … she thought it was within walking distance to the Fork Art Market at Santa Fe.

Once we were stranded, Kim Jawanda (South Africa’s Director for Arts and Culture in America) started calling around trying to arrange us local transport and she got in touch with a now very dear friend of ours named Deborah Sorensen from White Rock,” Zuko said.

“It was Deb who pulled elders out of their retirement and got them to drive us around. The transportation was provided by the Baptist Church in White Rock under Pastor Chuck McCullough.”

This year, Zuko and the tribal group were again invited to the International Folk Art Market.

“So this year we were invited to bring a tribal dance group again, but beyond the tribal dance group, my Tribe (AmaZizi Tribe of AbaThembu Kingdom) had developed interest in both Los Alamos and the Pueblo Indian communities around Los Alamos. So we then worked with Deb to try and start  lasting relations, which hopefully next year will see us bringing an opera on Nelson Mandela’s young life, titled, ‘Madiba: The African Opera’,” Zuko said.

He explained Los Alamos has presented a great impression to him.

Seeing the area for the first time, Zuko said, “The tranquility of Los Alamos, the humility and warmth of the people, the beauty of the winding roads and green bush covered terrain, the history of the area and its Pueblo heritage that date back to hundreds of years, they are all enough to keep me coming back here.

This is what impressed me last year and this is why we made the commitment this year to come on our own resources with my wife when the government program at the Santa Fe Folk Art Festival was cancelled as a result of visa challenges for the tribal group we were meant to travel with.”

Despite being located in different countries on opposite hemispheres, Zuko found similarities. “I enjoy visiting the Pueblo communities,” he said. “There are a lot of similarities with Pueblo tribal community life and customs.”

“I love Bandelier National Monument,” Zuko said. “I love the overlook onto the canyon in White Rock … I loved the breakfast we were invited to at the Baptist Church.”

Zuko added he enjoyed meeting with the town’s senior citizens. He explained that, in his culture, it is an honor to spend time with elders who possess qualities that are considered wise and full of joy. “Elders are revered in our custom,” he said.

Zuko had his own wisdom and knowledge to share with the community.

“We love to share our wealth of culture, heritage, folklore and this is done in order that, as we are in the information age, with social media, our young people will be inspired to grow up and become tribal ambassadors in their lifetime in other countries around the world,” Zuko said.

“The people that we talk to around the world are always fascinated to hear that some of the myths that they know about Africa are actually incorrect,” he said.

“Africa is an equally advanced, but culturally rooted place and that we are open for business and cultural tourism. We don’t have animals roaming the streets in Sandton, Johannesburg and Cape Town. Actually, there are many things that other countries and people can learn from us, rather than sticking to negative, romanticized stories about us. We do this with love and humility, with admiration of other people and their time and attention to listen to us, with total respect, which is imperative in our custom.”

Zuko juggles a lot of responsibilities. He operates his company, Vusizwe Global, which offers a multitude of services from planning, strategizing and managing special projects to policy advisement.  In addition, he is a trustee on his tribe’s community development trust and serves as head for the Pokwana Traditional Council.

“Traveling is eye opening especially for me as a historical researcher and tribal leader,” Zuko said. “It makes you learn a lot. My focus is never on shopping and other recreational activities. My traveling is always about maximizing the impact of the trip on the generation of knowledge and improving the way that we do things both in my professional work and in my tribal work.”