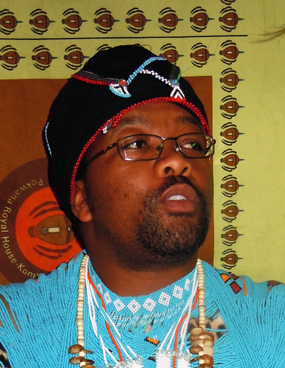 Los Alamos will receive a visit from royalty July 13-18 – an African Prince along with traditional South African performers coming to the town to share an energetic dance performance with live music July 15 and 18 at ScienceFest.

This is not the Prince’s first visit. This time last year, he was traveling with another South African performance group and arrived late in the evening at the Hampton Inn in White Rock. The group was under the assumption that the hotel was in walking distance of the International Folk Art Market festivities in Santa Fe, where they were scheduled to perform.

On top of that, the group’s performance was cancelled and they found themselves stranded in Los Alamos County. The hotel contacted a local tour service and found White Rock resident Deborah Sorensen who, despite the late hour, went to the hotel where she met the group and Prince Jongisilo Pokwana ka Menziwa, who asked to be called “Zuko.”

“I walked into the hotel and found a tribe of beautiful people, adorned in full costume, full of excitement to be here,” Sorensen said. “The performers are Xhosa tribe members, and from Zuko’s village. They had travelled to the United States by invitation from the Folk Art Market to share their talents and learn more about our culture, and were all very disappointed that they would not be performing. But they were intrigued by Los Alamos County and wanted to see as many things as possible during their short stay. I think they realized, as I do, that Los Alamos is a friendly, international town where you can foster lifelong connections.”

Sorensen arranged a van through the White Rock Baptist Church and took the group to Santa Fe and Bandelier National Monument. A friendship was established and Los Alamos County extended an invitation in April 2015 for the group to visit Los Alamos again, except this time with an intent.

On Wednesday, July 15—the first day of Los Alamos ScienceFest—the Los Alamos Creative District will host a special “Culture On Tap” featuring Prince Zuko who will share his life story with the public, from growing up in a small Zulu village to becoming the ruler of the tribe, and his ongoing work in political and social issues that affect his people. The engaging event will take place 5-6:45 p.m. at UnQuarked Wine Room in Central Park Square.

Immediately following the event at UnQuarked, the traditional South African band Dizu Plaatjies and the Ibuyambo Ensemble will bring a heart-pounding public performance at 7 p.m. to Ashley Pond Park. Local Zumba instructors, students and other dancers are being encouraged to attend, as African music and dance is a key element to Zumba. Los Alamos’ NM Dance Theater offers an African dance class incorporating South African dance moves in Zumba.