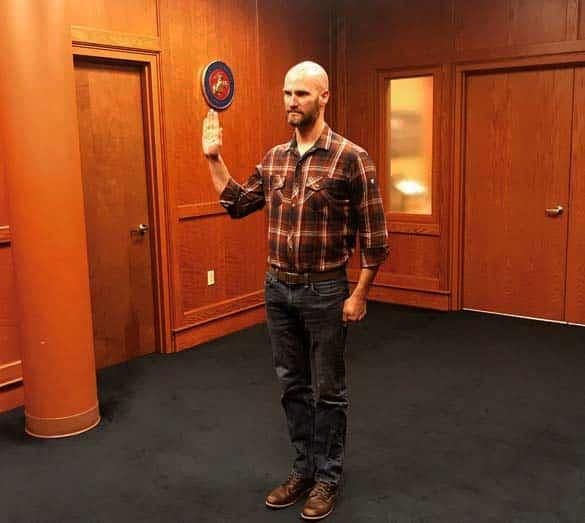 Los Alamos business owner Abe Dispennette moved his status in the Army Reserves to a position in the New Mexico National Guard during a special swearing in ceremony in December.

“I will be going through training as an 09S, which is an enlisted position that will commission me as an infantry commander of the 1-200 Regiment once training is over,” he said.

Dispennette left Tuesday for that training, which runs through late February at Fort Leonard Wood, Mo., in the Missouri Ozarks. The military post was created in December 1940 and named in honor of General Leonard Wood. Originally intended to train infantry troops, in 1941 it became an engineer training post with the creation of the Engineer Replacement Training Center. During World War II, Italian and German POWs were interned at the fort. In 1984, as part of the Base Realignment and Closure process, most of the U.S. Army Engineer School’s operations were consolidated at Fort Leonard Wood.

Dispennette explained that he is leaving the operation of his State Farm insurance office at 1350 Central Ave., Ste. 100, “in the great hands of my employees. The office will be fully functioning while I’m gone and when my training completes, like most National Guard positions, this will only be a weekend position and will not interrupt my insurance agency work … pending a national disaster of course.”

Prior to moving to Los Alamos more than five years ago, Dispennette served in the United States Army. He was honorably discharged in June 2012 after he applied and was accepted to take over the State Farm Agency in Los Alamos.

During a recent interview, Dispennette discussed his reasons for taking on this new endeavor with the New Mexico National Guard.

“I’ve decided to carry this responsibility for many reasons, but mainly because I appreciated the New Mexico National Guard’s role in helping with recent natural disasters in Texas and Puerto Rico,” he said. “I also have a desire to be challenged with new leadership opportunities.”

The National Guard is a unique element of the U.S. military that serves both community and country. The Guard responds to domestic emergencies, overseas combat missions, counterdrug efforts, reconstruction missions and more. Any state governor or the President of the United States can call on the Guard in a moment’s notice. Guard soldiers hold civilian jobs or attend college while maintaining their military training part time. The primary area of operation for Guard soldiers is their home state.

The National Guard differs from the Army Reserve primarily in that Guard soldiers serve a dual mission. They can be called on by their state governor or the federal government. Reserve soldiers do not have a state mission and cannot be called to respond to floods and hurricanes.