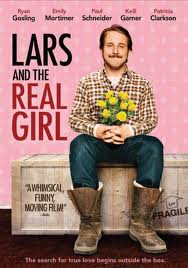 If you look up “Lars and the Real Girl” (2007, PG-13) on IMDB, the one-line blurb reports, “A delusional young guy strikes up an unconventional relationship with a doll he finds on the Internet.”

First, I wonder if the adjectives “delusional” and “unconventional” are really necessary, considering the noun “doll.” Second, I wonder if it’s possible to summarize such a paradoxically complex and simple film, at all, but particularly in a single sentence.

Yes, it’s about a quiet man who ─ unable to initiate a relationship with the kind of woman who breathes, eats, asks questions, and has the power to reject him – chooses instead to court a sex doll. But that is a jumping-off point, not a movie. It would be just as true to say that in “Lars and the Real Girl,” a newcomer unites a small northern community, and why yes, that newcomer is the glamorous if plastic Bianca.

It would also be true to say Bianca and Lars’s relationship, while ill-fated, ultimately is just as important for Lars as anyone’s first love, or that people don’t have to be “real” to have a good influence, or that sometimes what any member of our community endures, we also endure. We all change and grow, or fail to, with each other.

None of these neat little descriptions does a fair job, but each at least hints at depths beyond a movie about a guy who finds a doll more attractive than a woman, which the general plot of far too many films is.

Director Craig Gillespie did a fantastic job bringing Nancy Oliver’s sparse, elegant script to life, as did the actors. Ryan Gosling was heroically subdued as Lars, and Paul Schneider and Emily Mortimer, as Lars’s brother Gus and his wife Karin, offered lots of warm-blooded personality to the protagonist’s snowbound world. Other great performances by Kelli Garner and Patricia Clarkson seal the delusional, unconventional, and ultimately quite lucid deal. Who is the “real” girl? You might be as confused as Lars by the film’s conclusion.

“Lars and the Real Girl” screens at 6:30 p.m. Thursday, Feb. 6, at Mesa Public Library as part of the library’s Free Film Series. The Free Film Series presents a movie the first Thursday of nearly every month, thanks to the Friends of Los Alamos County Libraries.