A Delightful ‘Daughter of the Regiment’ Bodes Well For Opera Season 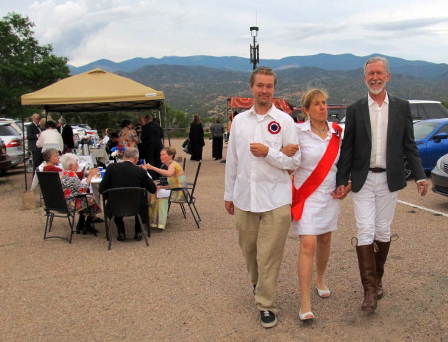 In the midst of a creative frenzy and heady renown after moving from Italy to Paris in 1838, Gaetano Donizetti modestly wrote to a friend, “I have written, orchestrated and delivered a little opera for the Opéra-Comique that will be given in a month or 40 days.”

The “little opera,” The Daughter of the Regiment, quickly became, and remains to this day, one of his most successful works. A reinvigorated version, sung in French and spoken in English, opened the 2015 festival season at the Santa Fe Opera Friday night.

The plot is about a battlefield foundling, a girl named Marie, who is virtually adopted by all the men of Regiment 21 of Napoleon’s army, now deployed somewhere in the Tyrol on the border between Italy and Austria.

“We’re all your fathers, now,” they say to a grown-up Marie, who is at once impertinent and very much attached to them as their mascot and canteen girl. While identifying with the men, Marie is now a young woman, although at first she denies the soldiers rumors that something is going on in her love life. “No hurry there,” she says. “All quiet on that front.”

When that front is breached, a war between individual freedom and hypocritical social standards is unleashed on the stage, where a giant, jumbled barricade is the towering symbol, an imposing and precarious blockade, but also pretty easy to get through when nobody is there. Sorting all that out with a heaping eye-full of comic fun is the moral of the tale.

Crowd-pleasing as ever, this new production has a special resonance thanks to the sensitive interpretation of director Ned Canty, the casting of soprano Anna Christy and tenor Alek Shrader as the embattled lovers, Marie and Toni, as well as the excellent choice of bass Kevin Burdette as the comical, paternal Sargent Sulpice Pingot. (Burdette will also play the blind man Stobrod in Jennifer Higdon’s Cold Mountain, which will have its world premiere Aug. 1.)

Much of the comedy is wrapped up in the ensemble numbers and the quasi-military maneuvers of the “Rube Goldberg” army, for which choreographer Sean Curry must take a bow. Special credit also goes to conductor Speranza Scappucci, who is making her SFO debut. She is still one of the first among a handful of women to conduct a main-stage performance here, which would be especially appropriate in this gender-bending story.

Canty made his directorial debut at the Santa Fe Opera in 2011 with Gian Carlo Menotti’s absurdist opera, The Last Savage, in which Burdette played Mr. Scattergood and Christy played Kitty, a combination that may well have left an impression on SFO General Director Charles MacKay at the time.

Marie’s new-found love, the Tyrolean-mountain hick who will become the leader of the regiment, Tonio sings his nine high Cs with ease, equaling an imaginary bar set previously by Juan Diego Flóres and even more effortlessly by Lucian Pavarotti. The problematic stretch in Tonio’s signature aria (Ah! Mes Amis – Ah, my friends, what a day for celebrating) has become an aesthetic test for the role and, by extension, for Donizetti’s bel canto (beautiful singing) style altogether.

Notably, Shrader’s view of the hurdle in one of the Santa Fe opera’s preview videos begins to walk that back. “The challenge is not to let the audience down,” he said. “How difficult it is, is debatable.” Result, for the record: he nailed it.

Shrader, who looks like Marlon Brando and walks, runs and gestures as the immature Tonio like Charlie Chaplin, made his Santa Fe debut in the title role in Benjamin Britten’s Albert Herring in 2010, on his way to become “a rising star.”

Canty’s 21st century parsing of old librettos apparently led him to believe that many decades of polyglot performances have played a bit of fiddlesticks with the original text, credited to Jules-Henri Vernoy de Saint-Georges and Jean-François. Early versions were translated into many other languages, of which English was probably not the first.

Also, over the years, there is inevitably a kind of attrition that wears down the language and especially any subtleties of thought and feeling that might detract from the comic bits or seem superfluous.

Canty said his sense was that Daughter of the Regiment “was a full and complete work of art.” What he found was that beneath the story of invincible young love, was another love story, the one about Sargent Sulpice and the Marquise of Berkenfeld, the Austrian aristocrat who discovers a very deep family secret in her encounter with the regiment and the orphaned girl.

That part of the story, the part about “people of an older generation finding a second chance at love was surgically removed from this piece, from the version that is most commonly done,” said Canty in his opera preview video. “I don’t know how to radically, reinterpret pieces. All I can do is sort of look at what was there and try to be as true to that as possible…. If we can give people new insights into this opera, that’s just a treat.”

Donizetti was 42 when the opera premiered. His wife had died in 1837.

Burdette and Phyllis Pancella play complicated roles as Sulpice and the Marquise of Berkenfeld, the older love interest. Sulpice is the comic lead whenever he has an opportunity, an aggressive, (half)-witty codger, who plays the same old, broken-record war story about his battlefield promotion by Napoleon every time his memory is jogged.

Burdette’s facial expressions and idiotic jigs, place him somewhere between Dick Van Dyke and Robin Williams. He is worth watching, whether he is the focus of attention or not. The Marquise of Berkenfeld by degrees makes an ass of herself from the beginning. She plays the humorless “straight-man” in Marie’s music rehearsal that veers out of control and is the tyrant willing to marry Marie off to a blue-blooded snob as a way to cover up for her own guilt as the girl’s real mother. But she also knows and will, like her daughter, act on the deeper truth, and the way Pancella reveals these traits, redeems her character.

The opera celebrates the ever-living Napoleonic tradition in France and has a patriotic feeling throughout, adding a special punctuation at the end that is a reason not to leave early. It is interesting to note that Donizetti was born in the year that Napoleon won a key campaign against Austria, beginning a period of French occupation of Northern Italy.

Perhaps important inspiring for the rataplan, marching motifs in the score, Donizetti’s older brother Giuseppe enlisted in Napoleon’s army, when Gaetano was still a boy, and served as a band conductor during campaigns in Austria and Spain.

The chorus in ‘The Daughter of the Regiment.’ Photo (c) Ken Howard/The Santa Fe Opera, 2015 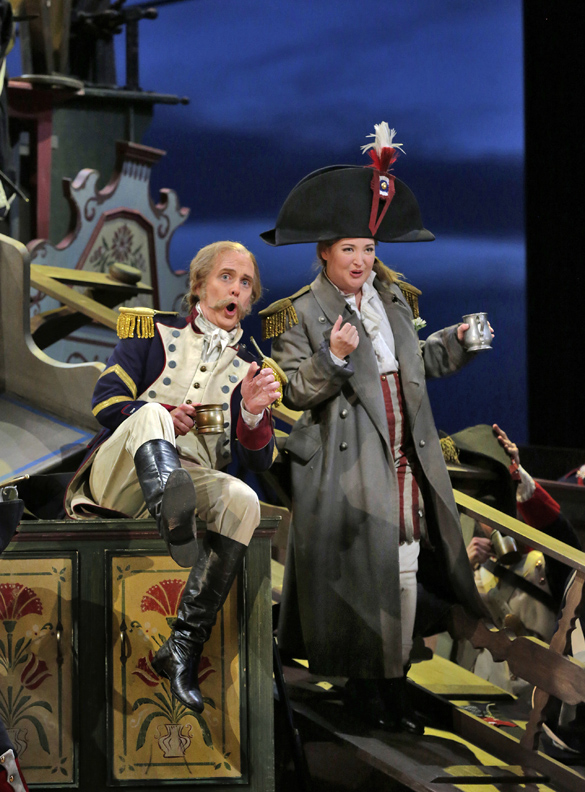