Zinke Sworn In As 52nd Secretary Of The Interior 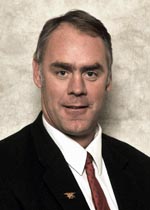 Secretary of the Interior Ryan Zinke

WASHINGTON, D.C. – Ryan Zinke (pronounced Zink-EE) was confirmed and sworn in Wednesday as the 52nd Secretary of the Interior.

The Senate voted 68-31 to confirm Zinke the morning of March 1, 2017, and he was sworn in by Vice President Mike Pence at a ceremony in the Eisenhower Executive Office Building later that evening. Zinke is the first Montanan to serve as a cabinet secretary and also the first U.S. Navy SEAL in the cabinet.

“I am honored and humbled to serve Montana and America as Secretary of the Interior,” Zinke said. “I shall faithfully uphold Teddy Roosevelt’s belief that our treasured public lands are ‘for the benefit and enjoyment of the people’ and will work tirelessly to ensure our public lands are managed and preserved in a way that benefits all Americans for generations to come. This means responsible natural resource development, increased access for recreation and sportsmen, and conservation that makes the land more valuable for our children’s children. Importantly, our sovereign Indian Nations and territories must have the respect and freedom they deserve.”

In nominating U.S. Rep. Zinke, President Donald Trump said, “Ryan has built one of the strongest track records on championing regulatory relief, forest management, responsible energy development and public land issues in Congress. As a former Navy SEAL, he has incredible leadership skills and an attitude of doing whatever it takes to win. America is the most beautiful country in the world and he is going to help keep it that way with smart management of our federal lands. At the same time, my administration’s goal is to repeal bad regulations and use our natural resources to create jobs and wealth for the American people, and Ryan will explore every possibility for how we can safely and responsibly do that.”

“Our public lands can once again be economic engines for our nation by creating jobs in energy, recreation, and conservation,” Zinke said. “By working with President Trump and Congress to reevaluate and fix flawed regulations that are barriers to job creation, we will unleash the economic opportunity within our borders. Creating jobs on public lands can and will be done in an environmentally responsible way during my tenure.”

As a fifth-generation Montanan who grew up in a logging and rail town near Glacier National Park, Zinke has had a lifelong appreciation for conserving America’s natural beauty while upholding Teddy Roosevelt’s vision of multiple-use on our public lands. He has consistently led the efforts to renew the Land and Water Conservation Fund in Congress, and has also been a firm advocate for our nation’s sportsmen and women to gain access to our public lands. Zinke also co-authored the 2015 Resilient Federal Forest Act, which initiated new reforms for revitalizing America’s timber areas and preventing wildfires by emphasizing local collaboration on responsible timber harvest projects.

As Secretary of the Interior, Zinke leads an agency with more than 70,000 employees who serve as steward for 20 percent of the nation’s lands, including national parks, monuments and wildlife refuges, as well as other public lands. The department oversees the responsible development of conventional and renewable energy supplies on public lands and waters; is the largest supplier and manager of water in the 17 Western states; and upholds trust responsibilities to the 567 federally recognized American Indian tribes and Alaska Natives.

Ryan Zinke has represented the state of Montana in the U.S. House of Representatives since 2014, building an impressive portfolio on Interior issues ranging from federal mineral leases to tribal affairs to public lands conservation. Zinke is widely praised for his voting record that supports the Teddy Roosevelt philosophy of managing public lands, which calls for multiple-use to include economic, recreation and conservation aspects.

Before being elected to the U.S. House of Representatives, Zinke served in the Montana State Senate from 2009 to 2011, but the bulk of Zinke’s public service was his 23 years as a U.S. Navy SEAL officer. Zinke enlisted in the Navy in 1985 and was soon selected to join the elite force where he would build an honorable career until his retirement in 2008. He retired with the rank of Commander after leading SEAL operations around the globe, including as the Deputy and Acting Commander of Joint Special Forces in Iraq and two tours at SEAL Team Six. Zinke was the first Navy SEAL elected to the U.S. House and is the first SEAL to serve as a cabinet secretary

Zinke and his wife Lolita (Lola) have three children and two granddaughters. Zinke is proud to be an adopted member of the Assiniboine Sioux Tribe at the Fort Peck Reservation in Northeast Montana.