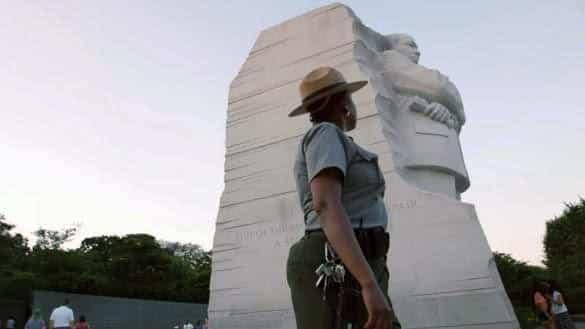 Courtesy photo
DOI News:
WASHINGTON, D.C. ― Highlighting the need to repair and rebuild our parks, U.S. Secretary of the Interior Ryan Zinke spoke Tuesday at a bi-partisan event at the Belmont-Paul Women’s Equality National Monument.
The focus of the event was on fixing and preserving national park infrastructure and the $11.6 billion maintenance backlog currently facing our nation’s 417 national parks. The Secretary was joined by Senators Rob Portman, Mark Warner, Lamar Alexander, Angus King, and Steve Daines, as well as representatives from the National Park Foundation, Pew Charitable Trusts, National Parks Conservation Association, National Trust for Historic Preservation, and the Outdoor Industry Association. Secretary Zinke also premiered a new National Park Service video that highlights the love story of Americans and our national parks.
“The immense infrastructure needs and maintenance backlog is one of the key issues facing our nation’s parks,” Zinke said. “Since my confirmation hearing, I’ve been adamant that we must address the nearly $12 billion maintenance backlog in our national parks. This isn’t a Republican issue or a Democrat issue—it’s an American issue. Addressing the infrastructure needs of our national parks is an investment in their future and in ensuring they live up to their world-class reputation for generations to come. As we continue to focus on increasing access to our public lands, we must address this great need because they go hand-in-hand. Yesterday’s discussion was another important step in this fight.”
President Trump’s Fiscal Year 2019 budget includes a legislative proposal to establish the Public Lands Infrastructure Fund. The Fund will provide up to $18 billion to address Interior’s maintenance backlog in national parks, national wildlife refuges and Bureau of Indian Education schools through funding from energy leasing revenues. Since the budget release, the Administration has worked cooperatively with Members of Congress to introduce and support legislation to deal with the maintenance backlog.
“President Trump recognizes the importance of a long-term investment in America’s treasures,” Zinke said. “The President is a builder who has made infrastructure a top priority of his Administration. Not since the 1950s has a President embarked on such a noble and ambitious mission to rebuild our national parks.”
Funding for the national parks would be used to rebuild basic infrastructure like roads, trails, lodges, restrooms and visitors centers.
While National Parks have enjoyed historic visitation over the past few years, many Americans have never been to a national park site and are unfamiliar with what infrastructure they hold.
Here’s a quick look at National Park Service infrastructure across the board:
“Our national parks are an absolute treasure for our country, and this important, bipartisan legislation will help ensure we can preserve them for generations to come,” Sen. Rob Portman said. “I want to thank my colleagues, Senators Mark Warner, Lamar Alexander, and Angus King, for their leadership on this issue as well as Secretary Zinke for his passionate support for our parks and our National Park System. I am urging leaders in the House and Senate to bring this bipartisan bill up for a vote this year so we can send it to the president’s desk for his signature.”
“After years of chronic underfunding, I’m proud that we are finally taking an important first step to address the National Park Service’s $12 billion deferred maintenance backlog. The Restore Our Parks Act will provide significant investments to protect and preserve our national treasures for future generations to enjoy,” Sen. Mark Warner said.
“The Restore Our Parks Act is about filling potholes, fixing bathrooms, maintaining trails and campgrounds, repairing visitors’ centers and restoring our 417 national parks so Americans can enjoy them,” Sen. Lamar Alexander said. “The good news is that Republicans and Democrats who often disagree are in near unanimous agreement we need to fix our national parks, and we agree that it should happen this year. Secretary Zinke has made clear the Trump Administration’s support for our bill, which would do more to restore national parks than anything that has happened in the last half century.”
“Our national parks amaze, astound, and awe millions of Americans each year – but in order to accommodate so many visitors, the parks need to be well-maintained,” Sen. Angus King said. “The existing $12 billion maintenance backlog threatens to prevent future generations from accessing these beautiful public lands, which is simply unacceptable. This bipartisan legislation would help address this backlog, and ensure that parks from Acadia to Zion will remain open and available for years to come.”
“Our national parks set us apart from the rest of the world,” Sen. Steve Daines said. “With this bipartisan and bicameral effort, we will be taking care of our national treasures and iconic landscapes that so many Montanans and Americans enjoy.”
LOS ALAMOS