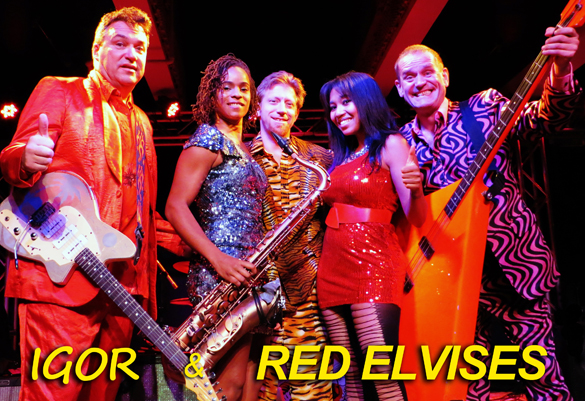 Igor and the Red Elvises, your favorite band, return to Ashley Pond at 7 p.m. Friday, June 13 for a free concert presented by the sponsors of the Los Alamos County Summer Concert Series.

“Your favorite band?” This band from Russia asked me if they could play at the old Central Avenue Grill one winter night about nine years ago. I checked them out on the net and we agreed on a date. They said a number of times at the show that they were our favorite band. They did put on a darn good show and they were a whole lot of fun but c’mon, I’ve seen many acts that are in the Rock ‘n Roll Hall of Fame and these cats were playing “Rokenroll,” Russian rokenroll.

They played Siberian surf rock, 50’s rockabilly, reggae, doo-wop, lounge-pop, some conga line dance music, disco, belly dance and Russian folk-rock. Whether they’re the greatest or my favorite doesn’t matter. The band has wonderful musicians, rocks out and everyone has big fun!! The audience dances, smiles, laughs and shouts with the Red Elvises.

The Red Elvises have played every year since that first show. They are Los Alamos’ favorite band! Igor Yuznov is the lead singer and guitarist. He also plays the keyboards , accordion and balalaika.

Yuznov was born in Germany and grew up in the Ukraine. The bass player, Oleg Bernov is also from Russia and plays an extremely large red balalaika that he built.  Bernov is also an accomplished drummer, whistler and European circus clown. These two men formed the band in 1995 after meeting up at a Russia and America peace march. They are the backbone of the band.

They’ve had lots of different great and energetic members in the band over the years but the Red Elvises are almost always on the road and that’s an incredibly tough road. They’re constantly driving back and forth across America, plus touring Russia, Europe and Asia. They now have two beautiful and sexy women in the group. I don’t mean to sound sexist but the Red Elvises do put on a funny, sexy and rocking show. Dregas Smith is from California and plays baritone sax, keyboards and sings. Sarah Jackson is from Texas and plays, flute, tenor sax, keyboards and also sings. Garrett Morris plays drums and is from California. The band has called Venice Beach, Calif. their home since 1995.

Friday night is another chance to turn on your friends, family, fellow students and work mates to the Red Elvises. I read the other day that Red Square in Moscow was named after our band! The show will be KRSN FM 107.1/AM 1490 Night.

Friday night, June 20 will be LANB Night and our band will be the Sonoma County, Calif. rock and Americana group, the David Luning Band. Check out LANB at one of their offices. For information on the Series, check out www.redelvises.com and YouTube and www.davidluning.com. and their YouTube music. You may also like www.gordonssummerconcerts.com  and www.krsnam1490.com.

Thanks again to all our sponsors including Los Alamos County. Thank you to the taxpayers for building the magnificent new stage. Hope you can catch the Red Elvises and the David Luning Band the following week.