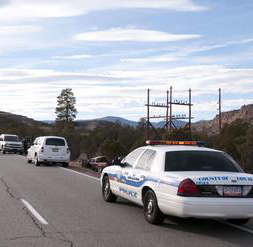 The two-car accident sent both drivers to the hospital and left a 14-year-old Los Alamos boy dead.

An online report by the Santa Fe County Sheriff’s Office reports that the boy, who has not been named, was pronounced dead at about 5:20 p.m. Wednesday at the scene.

Dennis Bernal, 43, of Santa Fe was driving northbound on N.M. 4 near the “Y” when he lost control of his Toyota pickup while attempting to negotiate a right curve and crossed the double center divide line, according to the report.

Bernal’s pickup crashed head-on with the front-left side of the Honda four-door sedan driven by Jennifer Ventura-Trujillo, 41, of White Rock.

The drivers of both vehicles tried to avoid each other at the last second, according to reports.

Ventura-Trujillo was released Wednesday night after being treated for minor injuries, but the girl was airlifted to University of New Mexico Hospital where she is now reported to be in stable condition.

Bernal was transported to Christus St. Vincent Regional Medical Center and has since been released.

Capt. Adan Mendoza of the Santa Fe Sheriff’s Office reported Wednesday that witnesses of the crash stated they had seen Bernal “weaving in and out of traffic” prior to the accident.

Mendoza said that no evidence was found to indicate alcohol was a factor in the collision, however, Bernal agreed to a blood test of which results are pending.

The boy who died in Wednesday’s crash was riding in the back seat of the Honda; it is not yet known whether he was wearing a seat belt.