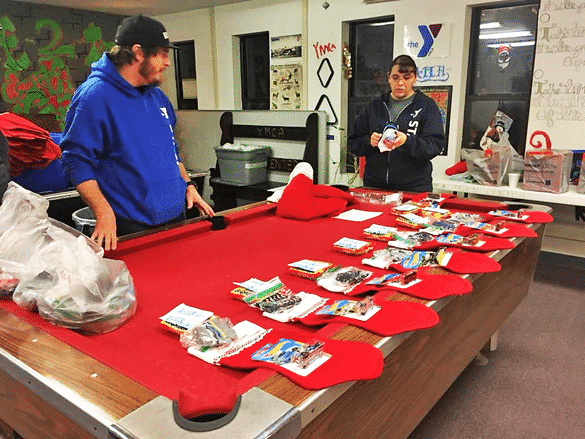 A staff member at the Española YMCA Teen Center was nominated in November for a Hero for Health award sponsored by the Con Alma Health Foundation. The Family YMCA, administratively based in Los Alamos, operates the Teen Center in Española under a contract with the city.

EYTC Administrative Assistant Renee Sandoval, a 10-year employee, was nominated by a Los Alamos co-worker. She began volunteering at the Teen Center when her spouse was hired to be the director. She said the place needed a lot of TLC and a ton of work.

“There was no place to sit … some of the ceiling tiles were falling, and the list goes on … so myself and our boys would come and help out in the afternoons after their nap time,” she said.

Sandoval volunteered many hours and months clearing, weeding and doing whatever needed to be done. Sandoval also started getting the word out about this amazing new resource that was opening its doors to community youth. She created lists of business owners and community leaders to invite to the grand opening in October of 2007.

“I fed all the visitors and teens who came by to check out the big day,” she said.

Sandoval was hired as an employee around that time by the Y’s CEO Linda Daly of Los Alamos.

“Here I am,” she said, “over 10 years later, and I am still feeding all the teens and whoever walks through the doors … I am frequently asked by new teen members if I live here. I let them know I have two homes.”

Her favorite part of the job is working with the teens, and she loves seeing alumni return to introduce their children, she said.

The Con Alma nomination for Sandoval:

“Society defines its heroes during catastrophic events; those who step forward to lend a hand; to act with compassion; to be there for a friend or for a stranger. That same giving spirit is evident in some individuals all the time, even when everything seems to run smoothly.

“Quiet and constant, they see a need and they fill it. There is no spotlight on those who help behind the scenes, and perhaps they prefer it that way. But these individuals, who will help on any ordinary day, are very special and valuable people indeed.

“Renee Sandoval is one of these. Late in 2007, she was hired as a staff member, however prior to that she had donated numerous hours of expertise and assistance to the YMCA, most especially in assistance to her husband, Ben Sandoval, Y Teen Center Director, in preparation for the Center’s October 2007 opening. Renee constantly related that she wanted to help, and she constantly did just that, she helped. She acknowledged the need and importance of the Center and she stepped up. She was our behind-the-scenes woman, without whom we would have suffered greatly.

“Renee is an everyday type of hero who steps forward to lend a hand; to act with compassion; to be there for a friend. As a volunteer, she was a perfect role model for the teens on respect and caring. She reveals true leadership qualities by showing the youth how to care for themselves and others. The teens and Center staff are not alone in their appreciation of Renee. Many of us at the YMCA have had the good fortune to benefit from knowing her, our everyday hero.”

Besides being the Teen Center’s administrative assistant, Sandoval teaches the cooking class there and counsels and coaches youth daily. She also is a busy mother of three. Some of her pet passions include the movie “Girls Just Wanna Have Fun,” because of the dancing and great music, and she loves the old Heavy Metal music, as well, including Metallica, Poison and AC/DC. She said the teens totally freak out when she shares this, “because they can’t imagine Ms. Renee listening to metal.”